Back then, in between, and today. The exhibition offers an examination of works that span fifty years. This presentation focuses on a number of recurring motifs and themes, such as the figure and the eagle, that have been essential to the development of the artist's work. 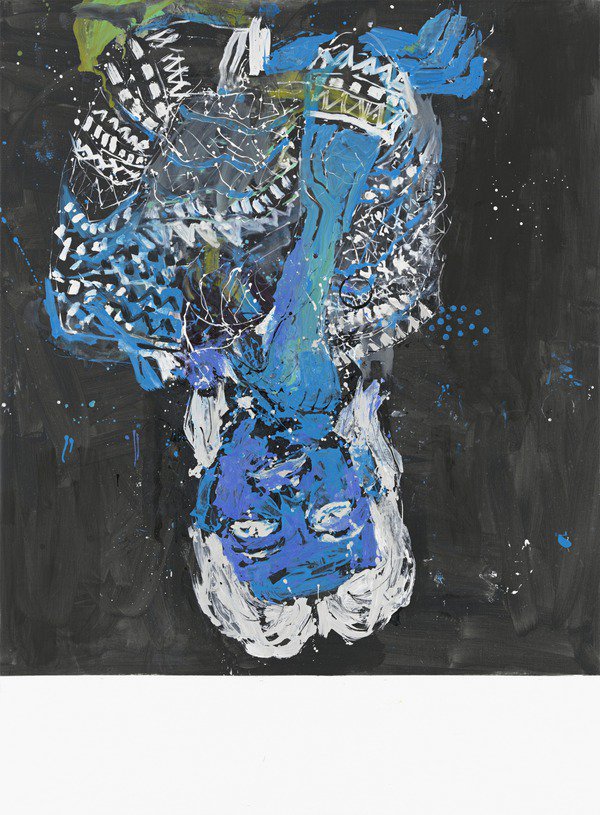 Since 2008, Haus der Kunst has presented monographic exhibition surveys of important contemporary artists, exploring specific aspects of these artists' works and development over the span of their careers. Examples of such include "Travelling 70-76", which presented many of Robert Rauschenberg's rarely seen works made of cardboard and fabric; Gerhard Richter's "Abstract Paintings" which explored for the first time this dominant work group independently; and the Ellsworth Kelly retrospective "Black and White."

In the Fall of 2014 Haus der Kunst continues this series of investigations, dedicating a comprehensive solo exhibition to the work of Georg Baselitz. The exhibition offers an illuminating examination of works that span fifty years. This presentation focuses on a number of recurring motifs and themes, such as the figure and the eagle, that have been essential to the development of the artist's work: the more recent group of the "Black Paintings" and the monumental bronze sculptures, investigating their formal and thematic origins in the artist's early work.

In the "Black Paintings" Baselitz has augmented his pictorial language with a further radical turn, one that aims toward the elimination of all visible contrasts and reveals an almost somnambulic mastery of his material. His fluid, circling brushwork exerts a magnetism in whose force-field the motif merges totally with the background. All the eruptive quality of his painting is still present, although it appears magically calmed, as if under a membrane. Vehemence turns into repose – but this is a repose that, far from superseding excitation, renders it all the more sublime. The works - in identical vertical format with the exception of two horizontal paintings - subtly differentiate the eagle motif in such a way that their identifying traits are all but concealed. Although the depicted motif is submerged in a light-absorbing darkness, the paintings are by no means colorless. Instead, the inverted image of an eagle in flight is executed in a chromatic sonority of dark tones consisting of blue, brown, and gray ranging to black.

The monumental bronze sculptures that he produced beginning in 2011 display formal and contextual references which, alongside figurative references, simultaneously relativize the pictorial function of the figurative and the photographic reversal. These sculptures, all of them bearing a black patina, appear just as 'obscured' as the "Black Paintings", produced at the same time. The sculptures invoke figurative themes that were coined in Baselitz's paintings; they allude to art-historical and biographical fields of reference. An especially plastic link is detectable in the "BDM Gruppe" (BDM Group; 2012), in which Baselitz mixes iconographic references with personal motifs. The space of meaning of the three figures is overlaid by recollected experiences, in relation to which the tradition of the "Three Graces" appears in contrast almost preposterous in formal terms: the figural group makes reference to Baselitz's memories of his sister, who was a member of the BDM (Bund Deutscher Mädel), the female branch of the National Socialist youth organization. In "Sing Sang Zero" (2011), the figural group would be readily identifiable as a double portrait of Elke and Georg Baselitz through the familiarity of the expressive gesture of the linked arms. In the most recent bronze sculpture, "Zero Ende" two skulls are linked together in a form that resembles a dumbbell that is surrounded by seven rings, symbolizing the cycle of a joint life.

The present investigation is based on those specific themes that are connected with the production of the "Black Paintings" and bronze sculptures. Those considered individually are the eagle motif, the standing figure and the figural pair, plus the portrait. In the foreground the question is: According to which current pictorial considerations and interests – however conceived – does Baselitz decide to take up again an object he handled years or even decades earlier? When they are taken up again, Baselitz's motifs are declined on the basis of their further development. This means that the motif is not only reconsidered, but also fathomed from multiple perspectives.

Paintings from the years 1965 to 1977 define five central pictorial objects, all of which have assumed such fundamental positions in Baselitz's further development that he has become preoccupied with them again from time to time: "Die großen Freunde" (The Great Friends) from 1965 possesses in the context of the "Heroes" pictures a kind of iconic significance within Baselitz's oeuvre as a whole; "Porträt Elke I" (Portrait of Elke I; 1969) is the first portrait that Baselitz painted of his wife, whereas "Schlafzimmer" (Bedroom; 1975) interprets an intimate subject, with both modeling in the nude; "Fingermalerei-Adler" (Finger Painting-Eagle), which dates from 1972, is his very first depiction of the eagle motif. In the context of its further development, the artist's predilection for this motif led to a consistent preoccupation that reveals its current, contemporary significance for Baselitz. None of the animal motifs that are incorporated into his iconography are depicted more frequently or multifariously.

In 2005 Baselitz started his "Remix" series, in which he picked up these key motifs. These pictures performs a temporal leap in the direction of the developments of the latter part of the previous decade. On the one hand, Baselitz here cites works from the "Heroes" in a paradigmatic fashion. On the other hand the development of the pictorial method is subjected to an acceleration of formal resources, one that permits a completely new access to the themes. "Vorwärts Wind" (Forward Wind) appears here in a relatively analogous approximation. The depiction of a figure in front of a naked tree stump is taken over, while the painterly structure is dissolved and the wan coloration is accentuated through the red epaulets and the pink fleshy hands and genitalia. In the new Remix versions, in contrast, "Moderner Maler" (Modern Painter) and "Schwarz" (Black) are associated with swastika motifs in the style of Piet Mondrian, with the symbol's iconic significance in modernism in some sense "compensating" for its ideological investment during the National Socialist era. These compositions again stand paradigmatically for the emptying out of the object in favor of an abstract conception of form as the autonomous function of the image. The spontaneous and loose manner of these works lead his painterly vocabulary to an unpretentious revision of his own history.

At the same time, Baselitz unleashes memories that recall the period of his own inner conflict between East and West, of ideological and artistic strife. Baselitz has never denied that de Kooning's paintings left a deep impression on him in the late nineteen-fifties. And in particular the powerfully expressive persiflage of the dictates of contemporary ideals of beauty embodied in "Woman I" (1950/52), which Baselitz first saw in 1958 in Berlin at an exhibition at the Hochschule für Bildende Künste (where it was shown together with Jackson Pollock's "Number 12" [1952], among others).

In the series of works known as the "Negative Paintings", Baselitz not only inverts the represented object, but tonal values as well. This presentation as a photographic negative enacts an additional reversal of the image in relation to a "natural" perception of the motif. The black-and-white "Negative Paintings" already heighten the degree of abstraction in three respects. Baselitz, then, has come close to exhausting the potential for the alienation of the object's external appearance and its possibilities of pictorial representation. The self-portrait "Zero" (2004) shows a simple, unpretentious view that is rendered in strong, serene brushstrokes containing a mixture of differentiated great values. With the formally analogous work "Negativ weiter links" (Negative Further Left; 2004), Baselitz turns back to "Elke I" (Elke I). Baselitz varies the same photographic prototype in "Elke negativ blau" (Elke Negative Blue; 2012), which brings the characteristics of the black-and-white version to resonance even more incisively.

Born as Hans-Georg Kern in 1938 in Deutschbaselitz near Dresden (Saxony), he grew up in East Germany. After being sent down of the Academy of Art in East Berlin (1956) for 'political immaturity' he applied at the Academy in West Berlin and moved there in 1958, completing his studies in 1962. During this period he adopted the surname Baselitz, reflecting his birthplace.

In his search for an alternative beyond the idiologically charged antagonism between Social Realism and Abstraction, he became interested in art considered to be outside of the mainstream of Modernism, basically in the Art Brut (Jean Dubuffet) as well as in Outsider art. He was further influenced by Existentialist art (Fautrier) and literature (Beckett, Ionesco, Artaud), by Dada (Schwitters, Picabia) and the works of the German authors Friedrich Nietzsche and Gottfried Benn.

After Baselitz's first solo exhibition in 1963 at Galerie Werner & Katz, Berlin, caused a calculated public scandal he embarked on a series of paintings depicting monumental male figures, which are best known as "Helden" / Hero paintings. They were prompted after his scholarship in Florence in 1965, where he became interested in Italian Mannerism. The following series of "Fracture" paintings lead by the late 1960s to his keen interest in the motifs of forests and trees. In 1969, he painted "Der Wald auf dem Kopf" his first work upside down, by which he wanted to focus the viewer's attention on the pure pictorial efforts and achievements. By the end of the 1970s Baselitz started making monumental wooden sculptures of heads and figures. His increasing international reputation was cemented by major museum shows and his participation in important group exhibitions.

Haus der Kunst is honored to be hosting this exhibition in close collaboration with Georg Baselitz. The fully illustrated catalogue is published by Prestel and includes contributions by Georg Baselitz, Katy Siegel, Eric Darragon, Michael Semff, Ulrich Wilmes and a conversation between Georg Baselitz and Okwui Enwezor.

Georg Baselitz - Back Then, In Between, and Today is curated by Ulrich Wilmes and organized by Haus der Kunst. A modified version of the exhibition will travel to the Powerstation of Art in Shanghai in spring 2015.