Temporary Discomfort documents cities in a transitory state of emergency lock-down experienced during global economic summits and anti-globalisation protests. The project combines different photographical genres: photojournalism, landscape and police photography achieved by the use of a variety of technologies. 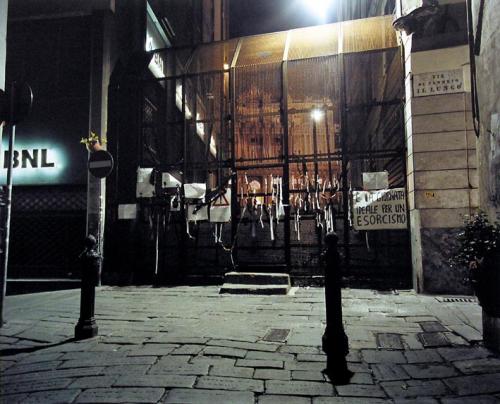 VTO is proud to introduce Jules Spinatsch's latest project, widely shown in Switzerland, Italy and the Netherlands and now premiered in the UK.

Temporary Discomfort documents cities in a transitory state of emergency lock-down experienced during global economic summits and anti-globalisation protests. The project combines different photographical genres: photojournalism, landscape and police photography achieved by the use of a variety of technologies.

At first the artist used regular cameras that needed his constant presence. In his latest project Jules Spinatsch installed a set of server controlled surveillance cameras near the desired hotspots, this allowed him to transmit images from the zones he was denied to enter. This meant that the artist was able to control the cameras from a nearby library, creating high-resolution panorama views overlooking a whole security depositor at the alpine setting by Davos in Switzerland.

The photo series and videos investigate the use and expectations of documentary photography. They raise questions about the conditions under which photography is and can be produced today.

"Jules Spinatsch's work Temporary Discomfort gives one possible answer. Since the WTO summit in Seattle in 1999, a colourfully diverse alliance of anti-globalization activists has organized demonstrations at summits of the WTO, the IMF, and the WEF, that ended up in riots with an almost ritual certainty. The media images of these conferences and riots are familiar and predictable. They continue the iconography of protest that has evolved since the Vietnam War and the civil unrest of the late 60s, or they show the staple imagery of statesmanship that has remained the same ever since the inter-war period and the end of WW II. We merely get to see washed-out copies of images weÂ¹re always and already familiar with.'

Spinatsch examines the waiting for the big event that appears as meticulously planned, down to the last detail. Whatever will happen, is already inscribed in its security architecture. The choreography of power and resistance is laid out right from the beginning.

Jules Spinatsch's photographs also talk about these events. But instead of street fighting and handshakes, he shows winter nights in Davos in the Swiss Alps during the World Economic Forum WEF, complete with floodlighted barbed-wire labyrinths. The sleepy waking of the security guards.

In the second gallery he invites us to scrutinize the streets in New York at night: roadblocks, tents, and mobile transmission units: that seem surreally empty. Whereas in the main gallery he continues to show Geneva during the last G8 summit where he focuses entirely on the covered up streets, buildings and shops, documenting how the logos of international brands first disappear behind wood only to be replaced later on with logos representing the anti-globalisation movement, such as slogans, signs, icons, graffitiÂ¹s, tags: revolution logos.

'He creates landscapes that could serve as the antithesis to Romantic tradition of this genre. He shows landscapes and cityscapes as they appear under cold, strategic gaze of security planners. Further the images are a subdued manifesto against the tradition of heroic photojournalism. Not a photojournalist hero he rather is a spy behind the enemy lines. He cunningly combines the condensed and motionless photographs with video images as if to remind us with this contrast that, after all, he shows us images, but that there is a reality behind the images that the viewer has to piece together. SpinatschÂ¹s anti-heroic stance also colours his other work. But maybe only an anti-strategist can show the cold and imperious glance of power so clearly and hauntingly." Martin Jaeggi

VTO would like to thank Joerg Bader from the centre de la photography in Geneva and the Luciano Fasciati Gallery in Switzerland for their helpful contributions and PRO HELVETIA for supporting the exhibition.

Lars Muller Publications will publish Temporary Discomfort as a monograph in spring.

Open: Friday to Sunday 12 am - 6pm or by appointment