Future/Past. His paintings are created with meticulous clarity, taking on an otherworldly luminosity that catapults them into the surreal. 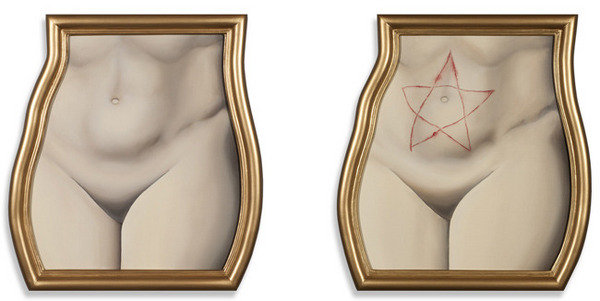 A much anticipated exhibition of paintings and sculpture by artist Bruce Richards will be presented at Jack Rutberg Fine Arts in Los Angeles. The exhibition, Bruce Richards: Future/Past opens with a preview reception on Saturday, September 20, 2014 from 6 to 9 p.m., with the artist in attendance. The exhibition extends through November 29.

The Rutberg Gallery exhibition Bruce Richards: Future/Past offers a full view of Bruce Richard’s works spanning several decades. His paintings - frequently in dialogue with related polychromed bronze sculptures - are created with meticulous clarity, taking on an otherworldly luminosity that catapults them into the surreal. While cited as having some resonance with the works of Rene Magritte who juxtaposed objects from ordinary life into fantastical compositions, in contrast, Richards employs a more singular focus on one or two objects, suspending them in a timeless space – a burning tire or match, a leaf, a twining snake, a coin etc. – to layer references to history, mythology, art, and personal experience and emotions. These layers impart enormous symbolic and conceptual weight to seemingly ordinary objects. His works can be both referential and ironic by contrasting art of the past and present, such as his play between a famous Magritte torso and Marina Abramovic's infamous performance where she carved a pentagram onto her belly. In another example he juxtaposes the prehistoric depiction of woman, The Venus of Willendorf, with a work by Jeff Koons. Bruce Richard's visual sleight-of-hand further informs the viewer through his use of titles. Puns and provocative word play provide witty clues to the artist’s frame of reference, sharing a certain sly kinship with another of L.A.’s Cool School icons, Ed Ruscha.

Richards states, "My aim is to engage the viewer in both the title's verbal association and its visual analogy." The late critic and poet, Donald Carroll cited: "These are not images that simply hang on the wall; they hang in the mind as well - agents provocateurs, teasing us, daring us to light the fuse that will set off a chain reaction of associative thought that lies behind - and beyond - these captured, isolated...representatives of the world we think we know...Bruce Richard's images are revealed as unexpected illustrations of who we are and what we think and, above all, how we think."