The artists included in the exhibitions, ranging from established to emerging, are invited to present one piece, trying to expand and go beyond conventional debates and notions of sculpture. 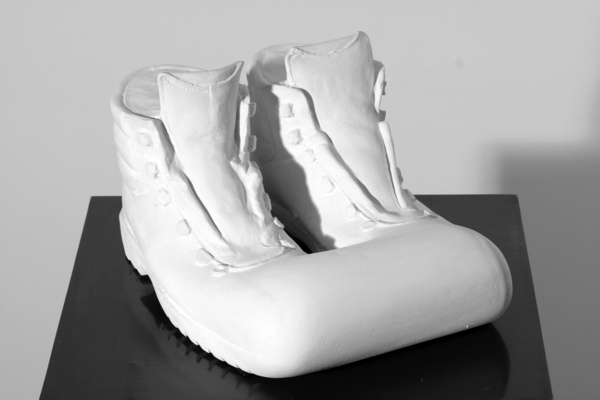 Galerie Rolando Anselmi is delighted to present the third chapter of the on-going project, About Sculpture, in its new venue in Berlin. The project will evolve throughout the year, with four group exhibitions exploring contemporary sculpture. The artistic relevance of this medium will be examined through the work of 24 international artists, born between the 60s and the 80s. The artists included in the exhibitions, ranging from established to emerging, are invited to present one piece, trying to expand and go beyond conventional debates and notions of sculpture. Their works reflect a multi-layered and contradictory image of common media definitions through the implementation of different strategies of investigation and aesthetic parameters. This on-going project will be crowned by the publication of a comprehensive catalogue at the end of the year. Alongside the just newly designed space, the gallery is thrilled to show in this occasion works by Davide Balliano, Jodie Carey, James Clarkson, Valerie Krause, Charlotte Mumm and Andreas Zingerle. The shows aim to build a narrative in space, investigating the relationship between space and material in an effort to exhibit a heterogeneous spectrum of possibilities.

Two works by British artist Jodie Carey, Untitled (Somewhere, Nowhere) I and II, 2011, lean on the wall of the gallery. The two large plaster slabs reveal light almost imperceptible traces of hessian, lacework, cigarette ash and coffee. The artist produces an intimate act that deals around ideas of time, memory and materiality. These are like monuments reduced to their essence, pulling the viewer into an almost scientific investigation of what is left behind; silent and anonymous traces of life. Davide Balliano presents Untitled, 2014, a ceramic piece coming from his latest production, realized in the context of NUOVE//Residency Summer Program 2014, in collaboration with Stylnove Ceramics, Italy. Balliano concentrates on eternal shapes, in this case the vault, and persists in investigating timeless topics as the existence of an order, in the attempts to represent this order or the intrinsic human need of feeling it.

The white concrete sculptures by Andreas Zingerle, belong to the series Saving Energy (Camera, Glasses, Shoes), 2013 and are located in the boundary between abstraction and representation. His sculptural qualities are reflected in the tactile surface of these peculiar objects, which lead to a reflection on everyday objects. Despite the severity of the composition and the formal accuracy that characterize Zingerle's works, they do not renounce to stage an essential uncertainty, a distance that makes them accessible through the multifaceted language of art. Concrete is the material used by Valerie Krause in Ich wollte den Winter wiedersehen, 2014. Her sculptures usually adopt elementary forms: they are not strictly geometrical constructs, but shapes that seem to assume movement in space. It's the immaterial embodied in the firmness of the physical that affects Krause's research and indicates the key to understand her idiosyncratic objects, in suspended balance, endeavouring to rise above their inner gravity effects. James Clarkson works primarily with ideas of assemblages, using often found objects and material.

The 3D sculptural collage, Three Part Construction, 2014, hanging on the wall of the gallery is made of steel and denotes the industrial steel production of Shieffield, UK, where the artist actually lives and works. The abundance of steel and its availability has inspired Clarkson’s own form of production, his resourcefulness, and his own formal language based on geometric forms, ever liable to shift and change. It is this dimensional shift, a sort of tension between painting and sculpture, transient and solid, which characterized his work in both form and conception. At the same time Charlotte Mumm experiments with an array of materials, such as fabric, metal, wood, carpet, plaster and also found objects, which she processes autonomously in separate stages to conclude in one hybrid structure. Möglich, 2013, plays with color and material, keeping a balance between static rigor and an almost spontaneous lightness. It expresses the direction of Mumm's creative process, which as the emblematic title suggests, remains open to a wide range of possibilities.