'Beware Wet Paint' is a group show of individual paintings by artists for whom painting forms a single strand within a multidisciplinary practice. 'Counting on People' show a selection of Neil Beloufa's latest works on film alongside recent sculptural works. 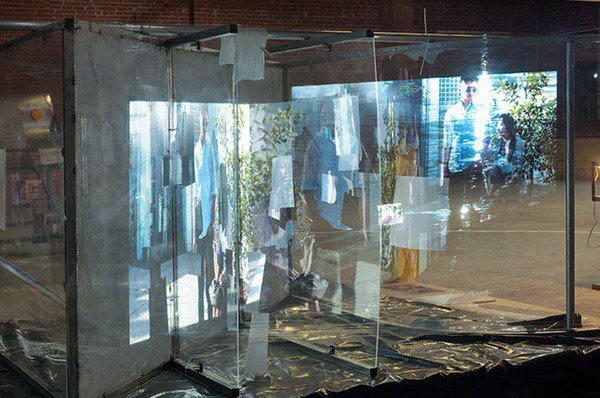 A collaboration between the ICA and Fondazione Sandretto Re Rebaudengo, Turin, Beware Wet Paint is a group show of individual paintings by artists for whom painting forms a single strand within a multidisciplinary practice.

The exhibition title comes from Richard Hamilton's recollection of Marcel Duchamp saying the words slowly with additional emphasis on the word 'beware', underlining the disruptive potential of what might otherwise be considered a traditional art form. The title also alludes to the notion of painting having been placed in the hands of those who might be said to be 'practicing without a license', a term once applied by Richard Prince to his own re-photography and more recently proposed by Christopher Wool at a recent Guggenheim talk in relation to painting.

As critic and curator Jan Verwoert asks, 'Why Are Conceptual Artists Painting Again?'. The retort being, 'Because They Think It's a Good Idea'. Later in the year, an adaptation to Beware Wet Paint travels to La Fondazione Sandretto Re Rebaudengo, Turin (29 October 2014 – 1 February 2015).
Related Events

In this first UK institutional exhibition of Neïl Beloufa’s work, the ICA show a selection of his latest works on film alongside recent sculptural works across the Lower Gallery and Theatre. These explore the representation of digital information systems and the often conflicting desires for openly available information within mass media. They are exhibited in specifically designed architectural installations where certain aspects of the images are able to be manipulated and fragmented throughout layers of screens within space.

Within the Lower Gallery, audiences will be met by a series of new sculptures and fragmented and live video works. Beloufa seeks to further break the conventional relationship with the screen, reorienting the way the audience relates to the imaginary constructs of a digital realm and the real world. The installation premiers two new films: Data for Desire (2014) seeks to explore and predict via mathematical systems the personality traits and actions of a group of people within a constructed environment, and VENGEANCE (2014) documents the artist’s engagement with a group of youths who directed and developed the film's narrative. Both of these new works construct situations and scenarios to make powerful statements about the complexities of human interaction and how we choose to interpret the world.

In the theatre Beloufa presents the film La domination du monde (World Domination, 2012), which was originally made for his exhibition at the Palais du Tokyo. This features alongside Home is Whenever I'm with You (2014) a new film co-commissioned by the ICA, London and The Banff Centre, Canada. The film illustrates how we choose to communicate via social media and engage with information and new forms of moving imagery since the advent of the internet and its relationship with the viewer.

French-Algerian artist Neïl Beloufa was born in 1985 in Paris. He has had recent solo exhibitions at the Mendes Wood Gallery, Sao Paolo (2014); Fondation d’Entreprise Ricard, Paris (2014); the Hammer museum, Los Angeles (2013); and Kunstraum Innsbruck, Innsbruck, Austria (2012); His videos have been screened at the Toronto International Film Festival (2011); the International Film Festival Rotterdam, the Netherlands (2009, 2012, 2014); and the London Film Festival (2009, 2010, 2011), and he was awarded grand prizes at the 54th and 57th Oberhausen Kurzfilmtage in Oberhausen, Germany. Beloufa has received many other honours, most recently the Audi Talent Award, Paris (2011) and the Meurice Prize for contemporary art (2013).