Mid-Sentence. Unlike traditional sculpture, Nina Canell's works are rarely static but consist of processes, situations or events. In this exhibition, they trigger associations and encourage us to think of a place where something can be shared, altered or set off in an unexpected direction. 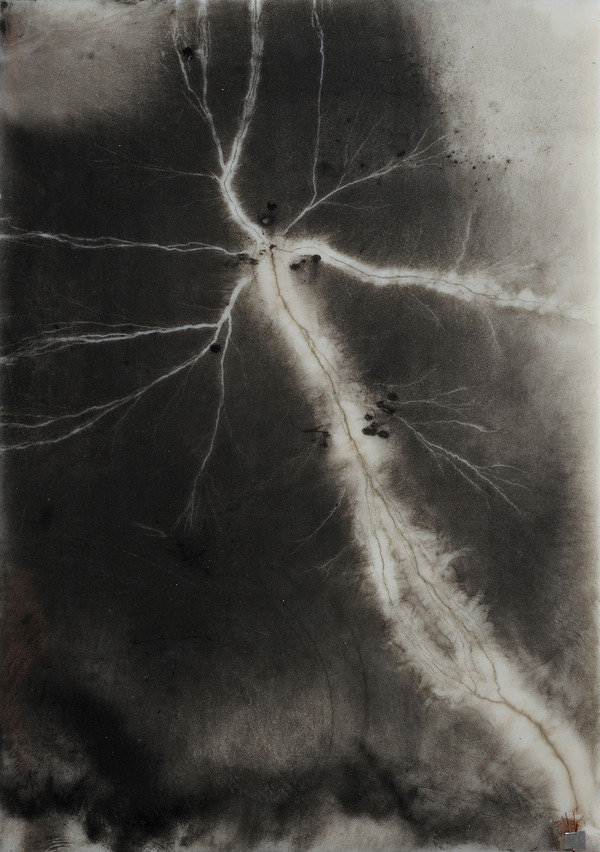 Mid-Sentence at Moderna Museet is Nina Canell’s first solo exhibition in Sweden. She has previously exhibited at a number of prominent international museums and institutions. Canell’s works generally consist of materials that are normally used for specific purposes – such as nails, electricity, air, water, chewing gum and sound. In this exhibition, they trigger associations and encourage us to think of a place where something can be shared, altered or set off in an unexpected direction.

Unlike traditional sculpture, Nina Canell’s (b. 1979) works are rarely static but consist of processes, situations or events. Accentuations of energy and movement recur frequently in her art. The work Three Long Milliseconds is a good example. From a height, a piece of natural rubber migrates towards the floor in a motion so slow that it is barely visible to the eye. The sooty trail on a small stick in Halfway Between Opposite Ends could be seen as its polar opposite. This work was created by passing 4,000 volts through the wood.

“At a glance, Nina Canell's works may appear abstract and connected to something material, but they infallibly suggest associations that stretch far beyond concrete reality. This exhibition reveals themes such as distance, closeness, thoughts, dreams and human relations. Her works are often like good literature, the combination of materials generates a vocabulary that summons up imaginary images,” says Fredrik Liew, curator.

Canell has chosen to call the exhibition at Moderna Museet Mid-Sentence, and says that“this can be interpreted as a point, not necessarily halfway, but as a freestanding coordinate”. It can be understood as something without a known origin, where the meaning or ending is as yet indefinite. Or, to put it differently, as a situation where anything is still possible. In this respect, we can discern an echo from pre-modern science, with a window open towards alternative routes to knowledge. One example is the Russian chemist Dmitri Mendeleev (1834-1907), who is famous for having formulated the periodic system according to atomic weight, a sudden insight which he claims came to him after falling asleep at his desk. Nina Canell and her collaborator Robin Watkins have captured 3,800 ml of air from Mendeleev’s study, which is now encapsulated in a glass container in the exhibition.

Of Air, as the work is called, represents one strand in the exhibition, which deals with hidden channels and how they manifest themselves in objects. This can also be observed in the new sculpture group Brief Syllables, which consists of unearthed and dissected electricity and communication cables. Unbroken, cables form the infrastructure for the wireless, online, constantly illuminated society we live in. Isolated, as fragments without a context, they seem absurdly bulky, dysfunctional, like prehistoric relics. Their cross sections appear to form a void or a dissolution. As the artist writes: “Cables are the opposite of sentimental. The current is only capable of carrying the current. Cable stumps are cross-sections of a vocabulary of interruptions. A cut-off form. Ending mid-sentence.”