'Places, strange and quiet ' presents more than 20 photographs by Wim Wenders from the past 30 years. Also on view a solo show by Morten Schelde. 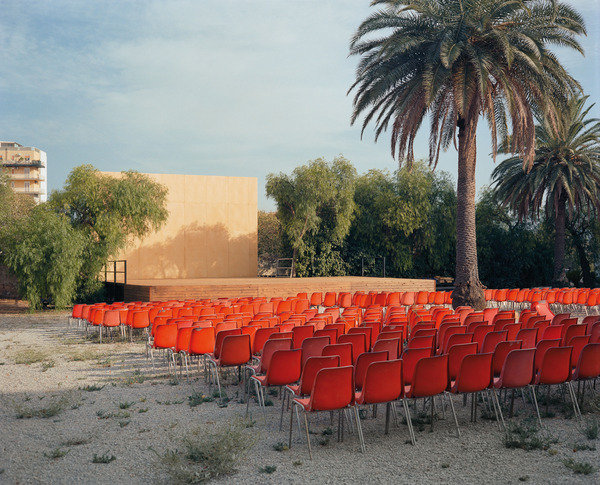 Wim Wenders has long since made his mark as a film-maker and visual artist. With Places, strange and quiet Wenders has assembled a fascinating and unusual series of large-format photographs shot all around the world. From Italy, Japan and Germany to Armenia and the USA, from iconic images of facades and buildings, known and unknown, to panoramic depictions of cities and landscapes, the exhibition will present the grand spectrum of Wenders’ work.

The pictures have typically been taken in connection with Wenders’ many travels to participate in film festivals, research and film shootings. They run as an independent track through his artistic career, and show his ability to bring out and underscore the neglected, the spectacular and the unsaid.

The exhibition presents more than 20 photographs by the famous film director and artist from the past 30 years. The exhibition at GL STRAND will conclude the exhibition’s major tour, which has gone the rounds of leading exhibition venues and museums all over the world.

Wenders has himself said of the journeys and his photographs: “When you travel a lot, and when you love just wandering around and getting lost, you can end up in the oddest places. I’m enormously attracted by many different places. As soon as I look at a map, with the names of mountains, villages, rivers, lakes or similar formations, I get excited as long as I don’t know them and have never been there... I think I’ve enhanced my sensitivity to the things that are out there. Everyone turns right, because that’s where the interesting things are, but I turn left. where there isn’t anything! And quite rightly: soon I’m standing in front of my kind of place. I don’t know if it’s a kind of built-in radar that often directs me to the places that are strangely quiet or oddly calm.”

The pictures demonstrate Wenders’ ability to bring out the unique character of the individual landscapes by focusing on what the rest of us do not see: a strange convergence of circumstances, an involuntarily humorous clash, and above all mankind’s influence on a landscape that continues to develop and change.

For some years now GL STRAND has had a special focus on the interaction of art and film. Under the heading “Art Moves” GL STRAND has turned the spotlight on the interplay of the arts and how crossaesthetic projects are able to include and challenge a new, different and wider art public.

During the period of 27 September – 25 November 2014 in which we present the exhibition Wim Wenders – Places, strange and quiet the Art Cinema is presenting the following film program.

Further to this, Wim Wenders has exclusively selected two films to be presented in the Art Cinema during his exhibition. They both shed light on other interesting photographers.

PICTURES OF A KINGDOM, 1994, 86 MIN. BY RALF ZÖLLER.
The German film director Ralf Zöller’s film portrait in black and white tells the story of the Slovenian photographer Evgen Bavcar and his photographic work. What is unusual is the fact that Bavcar was blinded in accidents in his childhood. Bavcar considers himself as more than a photographer. He also describes himself as an aesthete, philosopher and writer.

JAMES NACHTWEY – WAR PHOTOGRAPHER, 2001, 96 MIN. BY CHRISTIAN FREI.
James Nachtwey is considered to be the best war photographer in history. The German film director Christian Frei’s Oscar nominated film tells the story about his life as a photographer in the midst of many war battle fields.
NB! The film is not allowed for children under the age of 14.