Retrospective. Realized in the galleries by a team of performers who continuously recycle and transform French artist's solo work, conceived between 1994 and 2010, the exhibition opens up expanded opportunities for interaction within the museum. 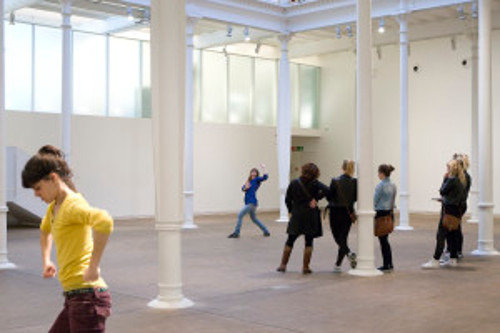 MoMA PS1 presents Retrospective, the inaugural American museum survey of French artist and choreographer Xavier Le Roy (b. 1963). Realized in the galleries by a team of performers who continuously recycle and transform Le Roy’s solo work, conceived between 1994 and 2010, the exhibition opens up expanded opportunities for interaction within the museum.
In his reconfiguration of the conventionally linear form of the retrospective as an accumulative mid-career survey, Le Roy brings his past works to life by consolidating and reimagining them into a new whole . In the process the exhibition unfolds across several different time axes that introduce temporal complexity to the galleries. T he result is a groundbreaking hybrid of choreography and vi sual art that transforms the traditional exhibition format into a creative medium.

"In Retrospective, Le Roy uses the tools he has as a choreographer to create possibilities for new experiences in the galleries. The exhibition is the natural evolution of our extensive initiatives bringing live art to the forefront of MoMA PS1’s diverse programming, "notes Jenny Schlenzka, Associate Curator, MoMA PS1.

Unlike other exhibitions that exist regardless of an audience, Retrospective is activated by its visitors. Upon entering the galleries, the performers greet the newcomer with a choreographed sequence. After reciting the year of origin of the solo works they are about to perform, the performers proceed to their respective positions. The first position reference s iconic moments in Le Roy’s own body of work. It is static, simulating the still temporal mode of sculpture or painting. The second position is more dynamic, the performer enacts short sequences and repeats them in a fashion comparable to a looped video. The final two positions, reflecting the form of narrative, are the most generative as Le Roy relinquishes his role of author to the performers. The performers then both show and tell Le Roy’s artistic development through communicating their own personal biographies to viewers. The different generations and backgrounds of these mainly New York-based performers contribute to further reimagining Le Roy’s oeuvre. By following a narrative from beginning to end and experiencing dance on an intimate scale, the a udience is offered the opportunity to dive deeper into the material.

The complex choreographic system underlying the exhibition reveals itself gradually. Upon entry, visitors are often astonished at being directly addressed by strangers in an otherwise empty gallery. They are then free to wander, deciding how much time and attention they would like to give the works on display. Through the exhibition the visitor is presented with multiple conceptions of time: the period during which Le Roy conceived the referenced solo works (1994-2010), the duration of the individual gallery visits, the performers’ daily labor time, and lastly the transformation and development the exhibition undergoes over the course of its two month run. It is within these complex temp oralities that the work offers its greatest potential. Instead of fostering the sensation of pure presentness, valued by so much of performance art today, Retrospective creates situations that allow viewers to consider how we use, consume, and produce different modalities of time.

After an early career as a scientist with a doctorate in microbiology, Le Roy transitioned to dance and choreography. From the beginning, he approached his work like a researcher, focusing on the relationships between product and process and his own involvement in them. This methodology places him among a generation of artists who came of age in the 1990s. Influenced by conceptual art and institutional critique, they radically questioned the fundamental conditions of their own practices. Through solo works such as Self Unfinished (1998) and Product of Circumstances (1999) Le Roy opened new perspectives in the field of choreographic art while simultaneously drawing attention from the visual art world. More recently he has exhibited his work increasingly in an art context, including group exhibitions, On Line: Drawing Through the 20th Century at The Museum of Modern Art, New York (2011); Production, created with Mårten Spångberg for Move: Choreographing You, Hayward Gallery, London (2011); and Untitled for the exhibition 12 Rooms, co-curated by Hans Ulrich Obrist and Klaus Biesenbach, multiple locations (2012). Retrospective is his first solo exhibition in the United States.

LIVE PROGRAM
The exhibition is accompanied by a live program presented as part of Sunday Sessions. Self Unfinished (1998) and Product of Circumstances (1999), both referenced in Retrospective, will be presented in their entirety giving visitors the opportunity to delve further into two of Le Roy’s most iconic works.

PUBLICATION
The exhibition is accompanied by a publication, Retrospective by Xavier Le Roy, featuring a series of conversations, guided interviews, score like reports, and essays. Edited by the performance scholar, Bojana Cvej ić, the book explores what the exhibition, Retrospective, does to and for choreography, the medium of exhibition, contemporary art, the spectatorial gaze, and social and public space. Voices of artists, dramaturges, performers, curators, critics, art histo rians, philosophers, and others reflect on the scope and variety of questions and positions triggered within and through the exhibition. Published by les presses duréel, the book will be available for purchase through ARTBOOK @ MoMA PS1.

ABOUT THE ARTIST
Before starting to create work as an artist in 1991 Xavier Le Roy worked as a scientist. He holds a doctorate in molecular biology from the University of Montpellier, France. From 1996 to 2003, he was artist in residence at the Podewil in Berlin. Between 2007 and 2008 he was an Associated Artist at Centre Chorégraphique National de Montpellier, France and an Artist in Residence fellow at the MIT Program in Art Culture and Technology (Cambridge, MA) in 2010. Through his solo works such as Self Unfinished (1998), Product of Circumstances (1999), and Le Sacre du Printemps (2007), among others, he has opened new perspectives in the field of choreographic art and radicalized academic discourse about the body.

The presentation at MoMA PS1 is made possible by MoMA's Wallis Annenberg Fund for Innovation in Contemporary Art through the Annenberg Foundation.
Additional support is provided by the MoMA PS1 Annual Exhibition Fund, and the French Institute Alliance Française (FIAF)