A collaborative Sound and Light Environment by composer La Monte Young and visual artist Marian Zazeela, a time installation measured by a setting of continuous frequencies in sound and light. Both artists are presenting works utilizing concepts of structural symmetry. 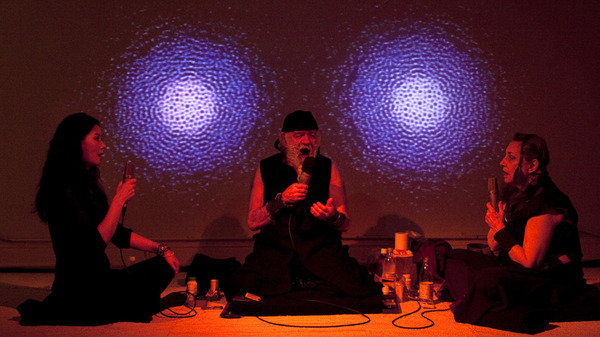 Dream House, a collaborative Sound and Light Environment by composer La Monte Young and visual artist Marian Zazeela, is presented in an extended exhibition at MELA Foundation, 275 Church Street, 3rd Floor. The environment is open Thursdays, Fridays, Saturdays, and Sundays from 2:00 PM to Midnight. Suggested contribution is $9.00. The long-term exhibition opened in Fall 1993 and will continue for this season through June 7, 2015, reopening again in September 2015.

Young and Zazeela characterize the Sound and Light Environment as "a time installation measured by a setting of continuous frequencies in sound and light." In the light environment Marian Zazeela presents four works, two environmental: Imagic Light and Magenta Day, Magenta Night, in installations specifically designed for the site; and two sculptural: the neon work, Dream House Variation I, and the wall sculpture, Ruine Window 1992 from her series, Still Light. In the environment Imagic Light, Zazeela projects pairs of colored lights on mobile forms to create seemingly three-dimensional colored shadows in a luminous field.

In the concurrent sound environment, La Monte Young presents The Base 9:7:4 Symmetry in Prime Time When Centered above and below The Lowest Term Primes in The Range 288 to 224 with The Addition of 279 and 261 in Which The Half of The Symmetric Division Mapped above and Including 288 Consists of The Powers of 2 Multiplied by The Primes within The Ranges of 144 to 128, 72 to 64 and 36 to 32 Which Are Symmetrical to Those Primes in Lowest Terms in The Half of The Symmetric Division Mapped below and Including 224 within The Ranges 126 to 112, 63 to 56 and 31.5 to 28 with The Addition of 119, a periodic composite sound waveform environment created from sine wave components generated digitally in real time on a custom-designed Rayna interval synthesizer.

Both artists are presenting works utilizing concepts of structural symmetry. Zazeela's mobile forms are arrayed in symmetrical patterns with lights placed in precisely symmetrical positions creating symmetrical colored shadows; the wall-mounted light sculpture and the neon are both symmetrical forms. Young's sound environment is composed of frequencies tuned to the harmonic series between 288 and 224, utilizing numbers with factors of only 9, or those primes or octave transpositions of smaller primes that fall within this range. The interval 288/256 reduces to a 9/8 interval as does the interval 252/224. Thirty-two frequencies satisfy the above definition, of which seventeen fall within the range of the upper, and fourteen fall within the range of the lower of these two symmetrical 9/8 intervals. Young has arranged these thirty-one frequencies in a unique constellation, symmetrical above and below the thirty-second frequency, the center harmonic 254 (the prime 127 x 2).

Young has stated that: "This is my newest and most radical sound environment; the Rayna synthesizer has made it possible to realize intervals that are derived from such high primes that, not only is it unlikely that anyone has ever worked with these intervals before, it is also highly unlikely that anyone has ever heard them or perhaps even imagined the feelings they create."

Young and Zazeela write: The July 1969 Sound and Light Environment at Galerie Heiner Friedrich, Munich, was our first public short-term Dream House. Under a long-term commission from the Dia Art Foundation (1979-85) we collaborated on a Dream House presentation at 6 Harrison Street, New York, set in a six-story building with a nine-story tower featuring multiple inter-related sound and light environments, exhibitions, performances, research facilities and archives. This was perhaps our most creative installation because for the first time we actually had substantial space available to realize our ideas. Dream House in Polling, Bavaria, opened in 2000 and is intended to exist as long as possible. It has become very highly evolved, presenting a wide range of Dream House elements, while the MELA Foundation Dream House Sound and Light Environment at 275 Church Street, New York, now in its twenty-first year, our longest installation to date. The various incarnations of our site-specific sound and light environment installations around the world, such as the 2010 installation at Regenbogenstadl in celebration of the 1000 year anniversary of the village of Polling, with two symmetrically placed pairs of mobiles in a configuration of The Magenta Lights and a sound environment of The Opening Chord in The Magenta Lights entrance gallery, The Magic Chord in the far video-screening gallery, and the acoustical mix in the center Still Light gallery to create The Magic Opening Chord, demonstrate the eternal evolution of the Dream House, a work “with a life and tradition of its own,” continuing into time “with a capacity to propel itself by its own momentum.”

In Minimalism:Origins (Indiana University Press, 1993), Edward Strickland wrote of their collaborative environments: "Intense light [is] aimed through [color] filters at quasicalligraphic aluminum shapes hung by ultrafine filaments. The effect is a unique and extraordinary transvaluation of perception: the mobiles seem to hover unanchored, while the shadows they cast in various hues attain an apparent solidity against the light-dissolved walls equal to their literally palpable but apparently disembodied sources. Like Young's music, to which it serves as an almost uncanny complement, Zazeela's work is predicated upon the extended duration necessary to experience the nuances which are its essence." The one-year sound and light environment collaboration, The Romantic Symmetry (over a 60 cycle base) in Prime Time from 112 to 144 with 119 / Time Light Symmetry (Dia Art Foundation, 22nd Street, NYC 1989), was described by Village Voice critic Kyle Gann as "some of the strangest and most forward-looking art New York has to offer."

The 1990 Paris Donguy Gallery Dream House environment now in the permanent collection of the Museum of Contemporary Art (MAC) Lyon was featured in the 2004-05 Sons et Lumiéres at Centre Pompidou and the Lyon Biennial 2005. Artforum drew connections between the New York and Lyon installations: “For the majority of compelling pieces here were the older ones, among them a few whose very appearance dramatized that vertiginous sense arising when objects from different eras come into incongruously close contact. (“Time does not pass,” Bourriaud writes of the effect, “it ‘percolates’”). In this department first honors must be awarded to La Monte Young and Marian Zazeela’s Dream House, 1993―. At its location in the Tribeca section of New York City, this roomful of infinitely repeating cycles of sound and light frequencies is a veritable wormhole in the urban fabric. (Outside it is 2006; inside it seems perpetually 1985, the year Young and Zazeela’s MELA Foundation opened its doors. It has since maintained an artist’s-loft sensibility once indigenous to the area.) Relocated to the cavernous industrial space of La Sucrière, however, the piece created other wrinkles in time, seeming at once placed at the cultural roots of European rave and trance culture—indeed, Lyon artistic director Thierry Raspail told me that Young obtained the very latest subwoofers for the occasion (the deep pulses raising the roof and making the floor feel ready to cave in)—and also utterly futuristic. Indifferent to Young’s deafening drones was the medieval architecture along the Saône river, visible through the installation’s tinted windows.”

Die Tageszeitung wrote about their 1992 DAAD Ruine der Künste, Berlin environment: "A longer stay in the Dream House is necessary to experience the full effect. The mind is calmed by the environment in a meditative way, and subtle sound and light effects that are veiled at first sight then come to the fore." Of the current environment, Sandy McCroskey wrote in 1/1 "Zazeela's light sculptures have invariably, teasingly refused to surrender their entire secret to photographic reproduction, so much do they depend on the retinal impact of activated photons in real time and so much do they exploit, in ways analogous to Young's techniques, the creation of visual combination tones and an accumulation of after-images."

In Architectural Design (Wiley, Vol. 78 No.3, May-June 2008), Ted Krueger described his experience with the interaction of the illuminated mobiles and the sound environment in the Dream House: “The spirals’ ultra-slow spin is induced by air currents from a viewer’s movements or thermal differences in the room. This creates a slowly changing composition of shadows and objects in varying intensities of contrasting hues. … [Henry] Flynt notes that the rare drift into compositional alignment by these dynamically independent objects implies a time scale that can encompass an infinite series of permutations. The group on the north glides momentarily into an approximate bilateral symmetry, and I check the alignment of the group on the other side. Given the scale of the room, the compositions on both sides cannot be compared in a single view, and as I look to the other side I sweep my head through a melody. The interplay between movement and stasis, of sound and light, directly integrates these works. Each becomes the context for the other.

Charles Curtis wrote in “Incomprehensible Space” (OASE #78, Journal for Architecture, 2009): “Dream House renders sound as that which it truly is, audible space…That sound can stand in a kind of complementarity between all of its parts without sacrificing the meaningfulness of even the smallest of those parts is the revelation of Dream House.” NFT (Not For Tourists), the insider’s guide to New York City 2011, declared the Dream House, “one of New York City’s greatest treasures,” “a Tribeca Landmark” and “one of the coolest long-running sound and light installations in the world.”

Nick Stillman wrote: "The Dream House can inspire sincere self-reflection -- of how people physically move, of how little there is of stillness, of how we've become trained to seek and to reward movement and action. To embrace the Dream House is to become entranced and lost in time. And with no permanent closing date established for Young and Zazeela's collaborative installation, this could be the dream that never ends." (The Brooklyn Rail, June 2003)

MELA's programs are made possible with public funds from the New York State Council on the Arts with the support of Governor Andrew Cuomo and the New York State Legislature and by generous contributions from foundations, individuals, and MELA Members.