The exhibition features works by artists Esvin Alarcon Lam, Elena Damiani, Marcius Galan, and Jorge Pedro Nunez. These finalists were selected after a two-step assessment process over the past six months. 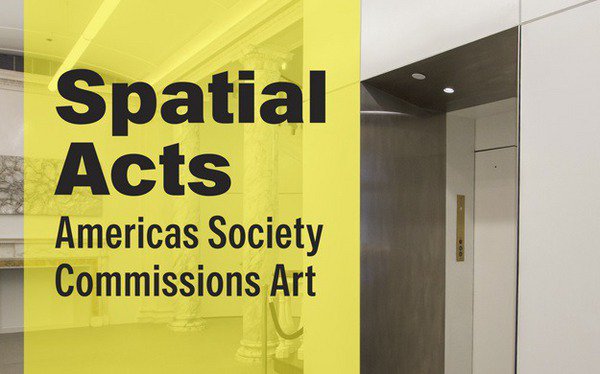 New York, September 11, 2014 —Americas Society will commission a permanent site-specific artwork to become the centerpiece of the David Rockefeller Atrium at its landmark building in New York City. The space was recently redesigned by Mexican architect Enrique Norten and his associates at TEN Arquitectos.

The Americas Society commission will be awarded to one among four outstanding emerging artists from Latin America whose work will be featured in the exhibition Spatial Acts: Americas Society Commissions Art, on view at the Society’s gallery from October 7 through December 13, 2014.

The art commission is the final stage of an initiative to reinvigorate the lobby of Americas Society’s building on 680 Park Avenue. The new space, unveiled two years ago as the David Rockefeller Atrium, pays tribute to the founder and honorary chairman of Americas Society and Council of the Americas—a man whose vision of exchanging ideas and enhancing understanding of the Western Hemisphere to find solutions to the region’s many challenges continues to drive the institutions he created almost half a century ago.

Americas Society’s headquarters at 680 Park Avenue were designed by McKim, Mead & White in 1909, and in 1966, the architectural firm Walker O. Cain & Associates directed restoration of the interior in the style of the original building. 680 Park Avenue was originally the residence of Percy Rivington Pyne, a prominent New York financier, from 1910 to 1946. It then served as the Soviet Mission to the United Nations until 1965. In that year, Margaret Rockefeller Strong, the Marquesa de Cuevas, purchased the building to save it from demolition and, in 1966, donated it to Americas Society, then known as the Center for Inter-American Relations. The building was designated a New York City landmark in 1970 and is listed in the National Register of Historical Places.

"The David Rockefeller Atrium was designed to link the new with the traditional. The new space, intertwined with the magnificent, traditional architecture of 680 Park Avenue, brings those who enter the Americas Society into the hemisphere of today," says Enrique Norten.

"The new atrium reflects the reinvigoration of Americas Society/Council of the Americas as the leading global institutions dedicated to Latin America and the hemisphere," says the organizations’ President and CEO Susan Segal. "By selecting an emerging Latin American artist to create a permanent installation for the entrance of our headquarters, we pay tribute to our tradition of being the first to present the work of what have become some of the hemisphere’s most important artists."

Spatial Acts features works by artists Esvin Alarcón Lam (Guatemala), Elena Damiani (Peru), Marcius Galan (Brazil), and Jorge Pedro Núñez (Venezuela). These finalists were selected after a two-step assessment process over the past six months. A nominating committee composed of Americas Society board and staff members, art professionals, and connoisseurs nominated 17 emerging artists from the Western Hemisphere, who by invitation submitted dossiers that included their preliminary proposals for the site-specific artwork. A separate selection committee of world renowned artists, curators, and collectors, as well as Americas Society board members and staff, evaluated the submissions based on criteria such as site-suitability, aesthetics, and alignment with the organization’s mission and trajectory.

"The commissioned piece will occupy an adjacent spot to the entrance of the Americas Society Art Gallery, whose history includes the first U.S. exhibitions of many artists from around the region such as Carlos Cruz-Diez, Gego, Michael Snow, and more recently Pedro Reyes, Dias & Riedweg, and Milagros de la Torre, among others. The artwork will serve as a testament to the tradition of our Visual Arts program and its commitment to fostering creativity and experimentation for the engagement of diverse audiences," says Americas Society Curator and Visual Arts Director Gabriela Rangel.

Elena Damiani (b. 1979, Lima) lives and works between Copenhagen and Lima. She studied Architecture at the Universidad Peruana de Ciencias Aplicadas and subsequently transferred to the Escuela Superior de Bellas Artes Corriente Alterna where she graduated in Fine Arts in 2005. She received her MFA from Goldsmiths College, University of London, 2010. Since 2003 she has had solo shows in Lima, London, Brussels, Madrid and Paris, and her work has been included in several international group exhibitions such as Idea of Fracture at Francesca Minini, Milan, 2014; Weather Permitting, 9th Bienal do Mercosul, Porto Alegre, 2013; Ciclorama at the Museo Tamayo, Mexico City, 2013; and the ICI touring exhibition Project 35 Volume 2, 2012-2014.

Marcius Galan (Brazilian, b. 1972, Indianapolis, US) lives in São Paulo. He graduated in Art Education at Fundação Armando Alvares Penteado in 1997. In 2003, he received a scholarship to the Cité des Arts in Paris, and in 2004 participated at the Art Institute of Chicago residency program through the exchange program from Instituto Iberê Camargo. In 2012 he won the PIPA prize/ Museu de Arte Moderna do Rio de Janeiro and a residency at Gasworks,London. His solo shows include Geometric Progression, White Cube Gallery, London, 2013; Diagrama, NC-Arte, Bogotá, 2013; Imóvel/Instável, Galeria Luisa Strina, São Paulo, 2011; Common Area, Galeria Luisa Strina, São Paulo, 2008; and Informal Geometry, Pedro Cera Gallery, Lisbon, 2008. He has participated in artistic projects in Europe and in North and South America.

The Americas Society commission awardee will be announced in late fall 2014 and the artwork will be fully executed and unveiled by fall 2015.

The Fall 2014 Visual Arts Program is supported, in part, by public funds from the New York City Department of Cultural Affairs, in partnership with the City Council, in addition to the individuals who made the David Rockefeller Atrium possible.

Americas Society is the premier organization dedicated to education, debate and dialogue in the Americas. Established by David Rockefeller in 1965, our mission is to foster an understanding of the contemporary political, social and economic issues confronting Latin America, the Caribbean, and Canada, and to increase public awareness and appreciation of the diverse cultural heritage of the Americas and the importance of the inter-American relationship. Americas Society Visual Arts program boasts the longest-standing private space in the U.S. dedicated to exhibiting and promoting art from Latin America, the Caribbean, and Canada; it has achieved a unique and renowned leadership position in the field, producing both historical and contemporary exhibitions.