At the center of the exhibition will be a series of Delocazione, Italian for de-location. The largest of these depict the impression of the burnt remains of a library while others represent windows, veils, and picture frames. 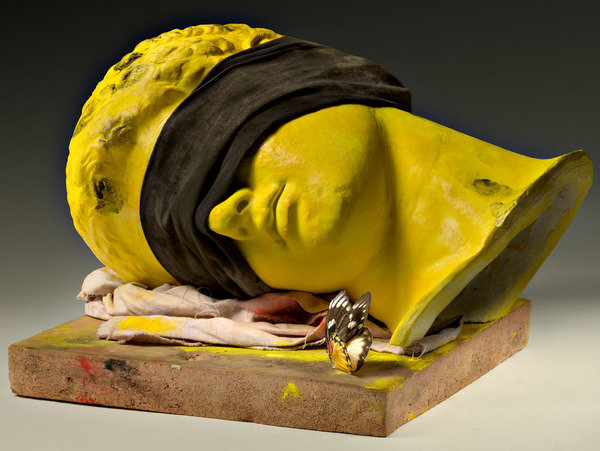 Bortolami is very pleased to announce a solo exhibition with the eminent and iconoclastic Italian artist Claudio Parmiggiani. His first exhibition in the United States since 1986, this show will bring together new and historical works across a variety of media that exemplify Parmiggiani’s fundamental concerns with memory, absence, fragmentation, solitude, silence and uncertainty.

Parmiggiani’s sculptural installations and interventions are simple gestures with profound resonance; he has been associated with both the Arte Povera and Conceptual Art movements, although he resists firm connection to either. Among the works in the exhibition will be a sixteenth-century bronze church bell hung from the ceiling by its tongue (as if choked, unable to produce sound); a series of sculptural assemblages from the 1970s consisting of antique plaster heads coupled with books, butterflies and birds nests; and 365 loaves of bread cast in iron and scattered across the floor. Entitled Chi mangia questo pane vivrà in eterno (Giovanni 6,58) (whoever eats this bread will live forever), the loaves not only symbolize essential nourishment but also invoke the dichotomy of the ephemeral and the eternal.

At the center of the exhibition will be a series of Delocazione, Italian for de-location. The largest of these depict the impression of the burnt remains of a library while others represent windows, veils, and picture frames. A central thematic and visual motif of his oeuvre, Parmiggiani chanced upon this working method in 1970, when at the Galleria Civica di Modena, he chose to exhibit in a room that normally serves as a storage unit. Objects had been left leaning against the walls and when he removed them he discovered their imprints in dust. He then decided to immortalize these silhouettes using smoke. In order to create his Delocazione, Parmiggiani builds an installation and sets it on fire with a combustion of tires. When the objects are removed, what remains are their negative outlines in soot thus revealing their trace and memory. Georges Didi-Huberman, in his important book on the work of Parmiggiani, Génie du non-lieu, describes these works in relationship to the breath:
“The kind of places that Parmiggiani creates in the series of works entitled Delocazione start with the work of the breath: it is a heavy smoke which exhales and deposits its soot, its ashes, its dust combustion, creating all forms to be seen. The result is a huge grisaille, a place for the asceticism of color, absence of objects, the unpredictable movement of volutes, the kingdom of shadows, the silence of an obsidian still life. The air becomes the essential medium of this work, it feels like a breath exhaled from the walls themselves. It becomes the molding tray of any image. Impossible, therefore, not to question this breath — that destroys the familiar space as much as it produces the place of the work — in terms of a memory where the history of painting meets the ghosts of Hiroshima. This moving air, densified, tactile, exhales time: remnants, haunting memories. The result is a new kind of uncanny. And it is in the dust that we have to find it.”