The exhibition is an ambitious and completely new reconfiguration of the installation Priority Innfield. An exploration of the impact of technology on communication, language and the construction of identity to new extremes. 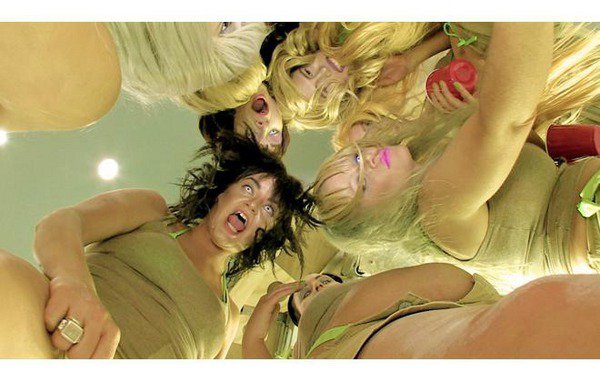 Zabludowicz Collection is pleased to announce the first UK solo exhibition by Lizzie Fitch/Ryan Trecartin, two artists whose collaborative practice is one of the most significant in contemporary art today. The exhibition is an ambitious and completely new reconfiguration of the installation Priority Innfield. Commissioned for The Encyclopedic Palace at the 55th Venice Biennale, and supported by the Collection, Priority Innfield was for many the highlight of the Biennale. The Zabludowicz Collection exhibition marks the start of twelve months of special activity celebrating 20 years of the Collection.

For the Zabludowicz Collection, Fitch and Trecartin will push their remarkable exploration of the impact of technology on communication, language and the construction of identity to new extremes. The whole gallery will be turned into a unified space through the application of an internal skin of paint and carpet. Visitors will enter a sealed environment, suggestive of shifted states of experience and perception.

Based upon the artist’s own finely-honed scripts and realised in meticulously created visual worlds, the video works of Ryan Trecartin are also fluid and open – a composite of contributions from a whole cast of collaborators. Fitch and Trecartin work together to create the sculptural installations in which the movies are presented, and the forms of sculpture that exist inside the movies themselves such as the sets and wardrobe. The sculptural installations invoke the mise-en-scène of everyday life, allowing the work to intertwine with memory and lived experience. Viewers are invited to enter this intensely disorientating yet disturbingly familiar space, with Fitch and Trecartin seeing the audience’s physical engagement as a crucial extension of the life of the work.

Four ‘movies’ – a term deliberately used by Trecartin – form the core elements of the project; Junior War, CENTER JENNY, Item Falls and Comma Boat (all 2013). These in turn occupy four sculptural theatres; Villa, Fence, Way, Pole. A fifth theatre, titled Tilt, functions as an observational theatre, activated by its proximity to the other theatres comprising the installation. A crucial audio element played in each of the theatres will be re-mastered by Trecartin for its presentation in London.

The sculptural theatres are reminiscent of vacant suburban environments such as an empty bedroom or stadium bleachers, combined with details such as a chain-link fence or a pile of sleeping bags. Each space functions as a threshold into Fitch and Trecartin’s universe.

The tension between history and evolution is a theme that permeates the four movies. Junior War comprises edited footage Trecartin shot of his peers during high school in Ohio in the late 90s. It shows the familiar dark energy of adolescent excess, and also a bygone era before social media ushered in a culture of continually documenting and sharing one’s life. The movie sets the tone for Trecartin’s evolving role as both participant and observer of our society and culture.

CENTER JENNY is set in a post-human future where a new type of people are studying their ancestors through a gaming system. We find ourselves inside a dystopian University, with an army of pupils all named ‘Jenny’ who must negotiate a terrain of competition and cruelty in order to ascend to the next caste-like ‘level’.

Item Falls, filmed at Fitch and Trecartin’s home in the Los Angeles neighbourhood of Los Feliz, shows multiple performers seemingly trapped in a perpetual audition while being assailed by animation effects. The actors’ ability to evolve across different stages determines their identity and social standing. Throughout the filming process Trecartin remained in character as an anthropomorphized version of the very process of directing – the capturing, witnessing and organization of information into a mediated state. Footage of the artist as a hostile and unstable film director makes up a final movie, the three-channel work Comma Boat.

Rather than an ironic or simplistic parody of our mediated culture, Trecartin implicates himself fully inside of its workings. From this cacophony he manages to edit language, performances, virtual surfaces and three-dimensional forms into inventive and emotionally affecting spaces that reflect something of the chaos of existence.

The exhibition will be accompanied by a major new publication, and a programme of live events.