Works from the collection. On view women artists positions of the past decades. The exhibition title quotes the sensationally successful doo-wop song of 1954 by the Chords, which has undergone many reinterpretations since that time. 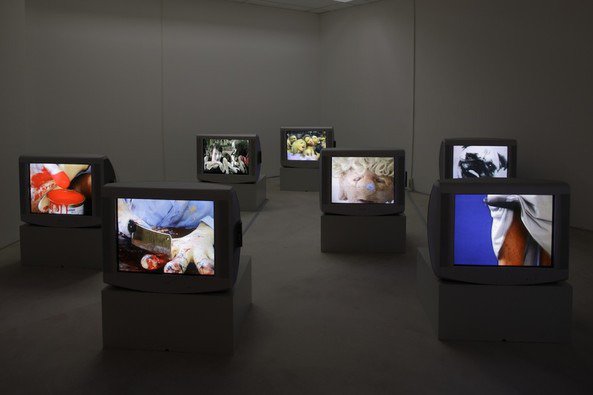 Since the 1990s, works by the major German women sculptors and concept artists of the present, for example Katharina Fritsch, Isa Genzken and Rosemarie Trockel, have been acquired for the collection, along with those of their colleagues abroad, including Vija Celmins, Marlene Dumas, Cady Noland, Pipilotti Rist and Elaine Sturtevant. The influence of these women artists on the development of the visual arts has been and is fundamental. With their radical and uncompromising approaches, they have shaped styles and, to this day, served the following generations as important examples. With such distinctive artistic positions as those of Charlotte Posenenske, Louise Lawler, Lee Lozano and Joe Baer, the MMK collection retraces the history of contemporary art back to the early 1960s. In the area of photography as well, one of the focusses of the museum’s collection, such prominent female protagonists as Hilla Becher, Anna Blume and Candida Höfer, as well as the documentarists Barbara Klemm, Anja Niedringhaus and Abisag Tüllmann are all represented.

Major works by Vanessa Beecroft, Rineke Dijkstra, Teresa Margolles, Sarah Morris, Taryn Simon and others mark significant expansions of the collection, which more recently has been enhanced with workgroups by women presently in the limelight of the international art world, for example Andrea Büttner, Jewyo Rhij, Dayanita Singh and Dolores Zinny. From the beginning, the MMK has also devoted itself to the Frankfurt art scene, and here as well the museum’s holdings are enriched by such individualist and radical perspectives as that of Anne Imhof, Franziska Kneidl and Adrian Williams.

It is with the diversity and strength radiated by the works of these women artists that the MMK would like to celebrate its new presence in the centre of Frankfurt between the station and financial districts. The selection will encompass various artistic techniques and conceptual approaches and present a wide range of issues and perspectives. In sculptures and installations, paintings and drawings, films and performances, the featured artists question the representation and societal connotation of the female body, concern themselves with social and global matters, investigate forms of narration and abstraction, and analyze strategies for the appropriation of space. Their works are distinguished by individual perceptions and personal experiences; they demonstrate subversiveness and the courage to be open. In the exhibition parkour designed by the architects KuehnMalvezzi, unifying and disparate elements will join to form a comprehensive overall picture.

The exhibition title “Boom She Boom” quotes the sensationally successful doo-wop song of 1954 by the Chords, which has undergone many reinterpretations since that time. More than anything a declaration of love to a woman, “boom she” makes onomatopoetic reference to the dropping of a bomb and thus to the climax reached by the Cold War in the year the song was first produced. In the context of the exhibition concept, a further level of meaning is added to the hedonist and fatalist connotations of the title, a level on which the demands and realities of the presence of women artists in the museum world is made emphatically manifest.

The founding of the MMK 2 branch is being realized through the initiative of Tishman Speyer in a joint venture with the Commerz Real AG and in cooperation with the departments of planning and culture of the city of Frankfurt and the MMK. It is being made possible with the generous financial support of the founding partners Stefan Quandt, the Ernst Max von Grunelius-Stiftung, the Helaba Landesbank Hessen-Thüringen and the DekaBank Deutsche Girozentrale, four long-standing cooperation partners of the MMK.

The inaugural exhibition “Boom She Boom” at the MMK 2 will be carried out under the patronage of DekaBank and Helaba.

Image: Sturtevant, The Dark Threat of Absence Fragmented and Sliced, 2002©