A Gothic Masterpiece. This exhibition offers the rare opportunity to view over forty folios from the disbound manuscript, the work of seven unknown artists who were clearly masters in their day. 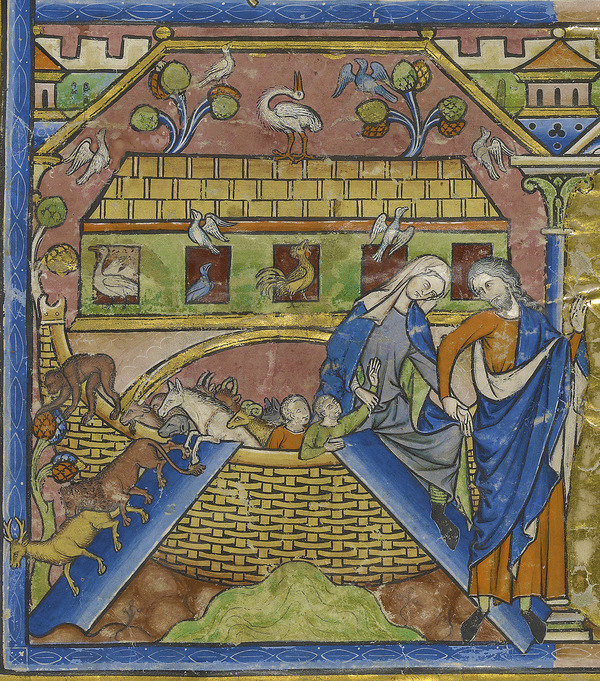 The Crusader Bible is one of the most extraordinary illuminated manuscripts ever created, renowned for its unrivaled and boldly colored illustrations and for its fascinating history. The work brings Old Testament stories to life in bright images replete with medieval castles, towns, and battling knights in armor, all set in thirteenth-century France. On view beginning October 17, this exhibition offers visitors the rare opportunity to view over forty folios from the disbound manuscript, the work of seven unknown artists who were clearly masters in their day. The exhibition runs through January 4, 2015.

The provenance of the Crusader Bible is as intriguing as its artistry, and includes a trail running from France to Italy, Poland, Persia, Egypt, England, and finally, New York. Additionally, a selection of period artifacts and armor, on special loan from the Metropolitan Museum of Art, will offer visitors tangible evidence of the objects depicted so dramatically in the book.

”The illuminations in the Crusader Bible are so bold and innovative that it is easy to forget the manuscript was created over seven centuries ago,” said Peggy Fogelman, acting director of the Morgan Library & Museum. “The exhibition is truly a special occasion; the Morgan has never before displayed so many leaves from this book at once. Visitors are guided through an unfolding narrative, reflecting the world of the Crusades as well as the manuscripts’ rich provenance and international travels.”

Patronage, Content, and Iconography for a Crusading King
Within the context of other artistic commissions as well as the crusading activities of King Louis IX of France, a body of circumstantial evidence points to his patronage of the Crusader Bible. Stylistic and iconographic parallels occur in the decorative program of the Gothic Sainte- Chapelle, which Louis built to house the relics of Christ’s Passion. The biblical kings are especially emphasized in both the imagery of the Crusader Bible and at the Sainte-Chapelle; they are also intentionally shown in crusader armor. Moreover, the size and quality of the bible point to high patronage, for it would have required considerable resources in the thirteenth century to plan and execute such a luxurious manuscript. Notably, as King Louis IX was born in 1214, this exhibition coincides with the celebration of the 800th anniversary of his birth.

The manuscript’s illuminations represent one of the greatest visualizations of Old Testament events ever made. Some of the stories depicted are familiar such as the epic battle of David and Goliath that appears on folio 28v. However, others, less well known, rarely appear in medieval manuscripts. As an example, the story of the Levite and his wife unfolds on folios 16r and 16v, depicting the gruesome events of rape, body dismemberment, and the subsequent outbreak of Civil War. In order to make its lessons relevant to contemporary readers, the creators of the Crusader Bible set Old Testament stories in medieval environments. For example, depictions of architecture evoke the castles and houses of thirteenth-century French towns, and battle scenes are illustrated with thirteenth-century armor, weapons, and battle insignia. The manuscript does not illustrate the entire Old Testament, but only select portions of Genesis, Exodus, Joshua, Judges, Ruth, and Samuel. Its forty-six folios are decorated with approximately 350 episodes, and about forty percent of the pages contain scenes from the life of David. While he along with other notables in the history of Israel—Abraham, Joseph, Moses, Joshua, Samson, Samuel, Saul, and Jonathan—figure prominently, their stories are not set in the Holy Land, but, rather medieval France.

The miniatures are notable for their monumental quality, execution, and narrative detail. The story-telling skills of the artists surpass those found in any other manuscript of the time, and the lively battle scenes and accurate renderings of medieval armor betray first-hand experience. Originally there were no captions to the miniatures, so narration was clarified by the use of architectural settings, costume, and gesture. The seven artists responsible for the work remain a mystery.

The Crusader Context
Crusader paraphernalia, including a thirteenth- century French sword, a prick spur, a war hat, and a shirt of mail will be displayed alongside some of the most vividly graphic battle scenes from the manuscript, thanks to key loans from the Metropolitan Museum of Art. These objects not only bring to life the reality experienced by thirteenth-century warriors, but affirm accuracy of the imagery in the Bible. For example, one of the miniatures depicts an enormous catapult, pulled taut, about to send a boulder at a group of opposing soldiers. The exhibition includes such a large stone projectile excavated at Montfort Castle, a site that Louis IX and his family likely visited during his stay in nearby Acre from May 1250 to April 1254.

Remarkable Provenance
If indeed, as seems likely, King Louis IX of France commissioned the Crusader Bible, he may have used the book as a propaganda piece for his crusading activities. Whether the manuscript traveled with him to the Holy Land is unclear, but during the centuries since its creation it has journeyed far and wide on its own.

Along the way, inscriptions were added to the book in Latin, Persian, and Judeo-Persian, indicative of changing owners. The Latin captions are the earliest, dating to the early fourteenth century. They were possibly made by a scribe trained in Bologna nearly three centuries before the Bible passed to Cardinal Bernard Maciejowski, the Bishop of Cracow. The Persian captions come next. They were added shortly after 1608, when the manuscript was presented by the cardinal as a diplomatic gift to the Persian ruler Shah 'Abbas the Great in Isfahan. The Judeo- Persian inscriptions are last, and were probably made in 1722 or shortly after, as that year Isfahan was sacked by the Afghans. Perhaps at that time the book was looted by an Afghan soldier and possibly exchanged with an Iranian Jew. With these inscriptions, the keepers of the manuscript used their languages to assert their ownership of the book and interpret its scenes and their significance within their own cultures.

The manuscript was subsequently owned by John d’Athanasi, a Greek living in Cairo who secured Egyptian antiquities for English collectors. In 1833 he put it up for sale at Sotheby’s. The manuscript was bought by London dealers, who in turn sold it to Sir Thomas Phillipps (1792– 1872). In 1916, Belle da Costa Greene, acting on behalf of J.P. Morgan, Jr., visited Phillipps’ heir and grandson, promising to buy the manuscript. The Crusader Bible remains in the collection of the Morgan Library & Museum to this day.

Online Exhibition
To complement the show, an online exhibition is available for view on the Morgan’s website at www.themorgan.org/Crusader-Bible. In addition to the folios displayed at the Morgan during the exhibition, the entire Crusader Bible can be seen online, allowing visitors to zoom in and learn more about this fantastic manuscript and its rich content. English translations of the Latin, Persian, and Judeo-Persian inscriptions are also available in this online exhibition.

For Family Sunday Story Time in Mr. Morgan’s Library
Join us for Sunday story time! In this drop-in program, knights in armor, fearless horses, princesses, and kings will carry families back to medieval times, and introduce them to the Morgan’s glorious collection of medieval manuscripts. Appropriate for ages 2 and up.
Free with museum admission. Free to Cool Culture members.
Every Sunday from October 12-December 28, 3-4 PM

Lecture European Arms and Armory of the Crusades
Pierre Terjanian
The Crusader Bible provides wonderful representations of medieval warriors in combat. Pierre Terjanian, Arthur Ochs Sulzberger Curator in Charge, Department of Arms and Armor, The Metropolitan Museum of Art, will explore the arms and armor of the Crusades by looking at both preserved artifacts and painted and sculpted representations from the period. Tickets: $15; $10 for Members; Free for students with valid ID The exhibition will be on view at 5:30 PM for program attendees. Tuesday, October 28, 6:30 PM

The Morgan Library & Museum
The Morgan Library & Museum began as the private library of financier Pierpont Morgan, one of the preeminent collectors and cultural benefactors in the United States. Today, more than a century after its founding in 1906, the Morgan serves as a museum, independent research library, music venue, architectural landmark, and historic site. In October 2010, the Morgan completed the first-ever restoration of its original McKim building, Pierpont Morgan’s private library, and the core of the institution. In tandem with the 2006 expansion project by architect Renzo Piano, the Morgan now provides visitors unprecedented access to its world-renowned collections of drawings, literary and historical manuscripts, musical scores, medieval and Renaissance manuscripts, printed books, photography, and ancient Near Eastern seals and tablets.