To commemorate its 30th anniversary, the Fondation presents two projects. Musings on a Glass Box, by Diller Scofidio + Renfro, is a new site specific installation. The painter Guillermo Kuitca illustrates the history of the Fondation and its relationships between artists and artworks. 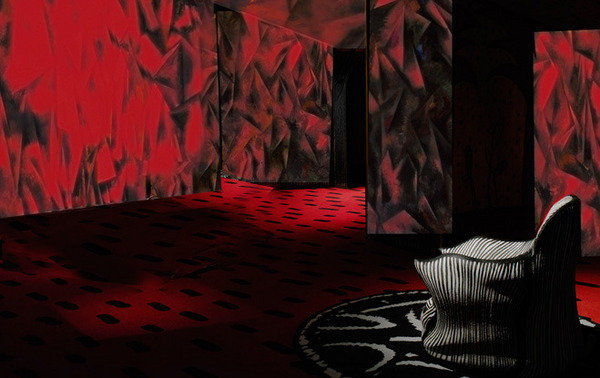 On October 20, 1984, in Jouy-en-Josas, near Versailles, Cartier inaugurated the Fondation Cartier pour l’art contemporain, a pioneering gesture in support of living art. Ten years later, in May 1994, the Fondation Cartier moved to Paris, into the architecture of glass and steel that had been created for it by Jean Nouvel.

Thirty years later, the Fondation Cartier pour l’art contemporain remains true to the values on which it has based its action and which affirm its identity. It promotes discovery, by revealing young artists to the public or by unveiling the secret side of world-renowned artists. It promotes creation through the commissioning and production of works. By opening up to the most diverse realms of creation and knowledge, it stimulates curiosity and discovery through its exhibitions.

For one year, from May 2014 to March 2015, the Fondation Cartier invites you to share in its celebration of thirty years of free and generous patronage, based on unique commitment, lived experiences, and continuous dialog with artists from around the world. The exhibition Vivid Memories (May 10 › September 21, 2014), accompanied by concerts and events, presents some of the most emblematic works of the Fondation Cartier collection, all related to its history. Works to discover and rediscover. For five months, the exhibition Vivid Memories will be constantly transformed, making it possible to see a significant part of the Fondation Cartier collection: thirty years of creation and freedom.

From October 25, 2014 to February 22, 2015, the Fondation Cartier pour l’art contemporain will continue to commemorate its 30th anniversary with Musings on a Glass Box, a new installation created especially for the occasion by the internationally acclaimed interdisciplinary design studio Diller Scofidio + Renfro.

The Fondation Cartier building designed by Jean Nouvel will be used as raw material for their work, a first in the history of the institution. Musings on a Glass Box is a complex work occupying the entire ground floor of the Fondation Cartier, where a disturbance in the ceiling will trigger a surprising reaction. The result is an immersive environment, including an integral acoustic component by American composer David Lang and sound designer Jody Elff, that works with the building’s architecture to raise questions about transparency, perception, and one’s relation to space.

Musings on a Glass Box
"Jean Nouvel’s distinctive glass exhibition spaces in the Fondation Cartier have been a provocation to artists and curators for two decades, upending the conventions of the white box gallery and pushing the limits of architecture. The large, transparent walls of the building were at the forefront of glass technology in the ‘90s, aspiring to one of Modernism’s highest goals: to dematerialize the wall and seamlessly connect interior to exterior.
Musings on a Glass Box empties the ground floor galleries in order to put them on display. Their visual and acoustic qualities are heightened through a few strategically placed interventions in the building’s plumbing, electrical, and facade systems. Using a cliché of time lapsed and the appearance of neglect, the project begins with a single, mischievous leak from the ceiling. A response ensues with the aid of a bucket, a chorus, sensors, robotics, remote communications, video, and real-time sound processing. The two ground floor galleries interconnect in a feedback loop. Small gestures in the large gallery are amplified in the smaller one, making the familiar seem uncanny and turning the banal into the grotesque."
Diller Scofidio + Renfro

The Argentinean painter Guillermo Kuitca presents an installation that illustrates the history of the Fondation Cartier pour l’art contemporain and its unique way of establishing relationships between artists and artworks, inciting encounters of many kinds, and making connections from one project to the next over the years. Occupying the entire lower level of the Fondation Cartier, this work is entitled Inhabitants, borrowing from the film of the same name by Armenian filmmaker Artavazd Pelechian. Through this work created especially for the occasion, Guillermo Kuitca plunges visitors into a pictorial and sound environment, building an intricate network between his own art and that of David Lynch, Vija Celmins, Patti Smith and Artavazd Pelechian.

The idea for Inhabitants came from David Lynch’s life-sized recreation of a living room, inspired by one of his own small drawings. For Guillermo Kuitca, whose work is filled with references to theatrical interiors, seeing David Lynch’s 2007 exhibition The Air is on Fire at the Fondation Cartier, where the living room was shown for the first time, was an important experience that struck a profound chord. Guillermo Kuitca further explores this encounter by inviting visitors to rediscover a concert given by Lynch and Patti Smith at the Fondation Cartier on October 28, 2011 as part of the Mathematics, A Beautiful Elsewhere exhibition. For Guillermo Kuitca, this event embodied the concept of reinterpretation that underlies his entire project, and he incorporated the concert’s sound recording into his installation. During this unique performance of music and poetry that brought the two artists together on stage for the first time, Patti Smith adapted a text written by Lynch that told the story of an antelope who wanders through a city and observes its people. The phrase "I saw an antelope" returns again and again, like a litany. It provides an echo to Artavazd Pelechian’s film Inhabitants, an ode to nature that depicts images of animals frantically trying to escape from an invisible threat.

Guillermo Kuitca’s installation Inhabitants constantly plays on viewers’ sensations and creates optical illusions. It also invites visitors to reflect upon his oeuvre as a whole, characterized by references to maps and the intersection between places and things, as well as allusions to physical, mental and emotional territories in which the human figure is conspicuously absent. Inhabitants is inspired by the same spirit. Stimulating dialogue and making surprising multilayered connections between the works, artists and ideas presented, Inhabitants also reflects the unique manner in which the Fondation Cartier pour l’art contemporain has operated for 30 years.