The 9th edition of the fair brings together 30 galleries during contemporary art week in Paris. A selection of about 10 projects by emerging artists is also exhibited on the platform. 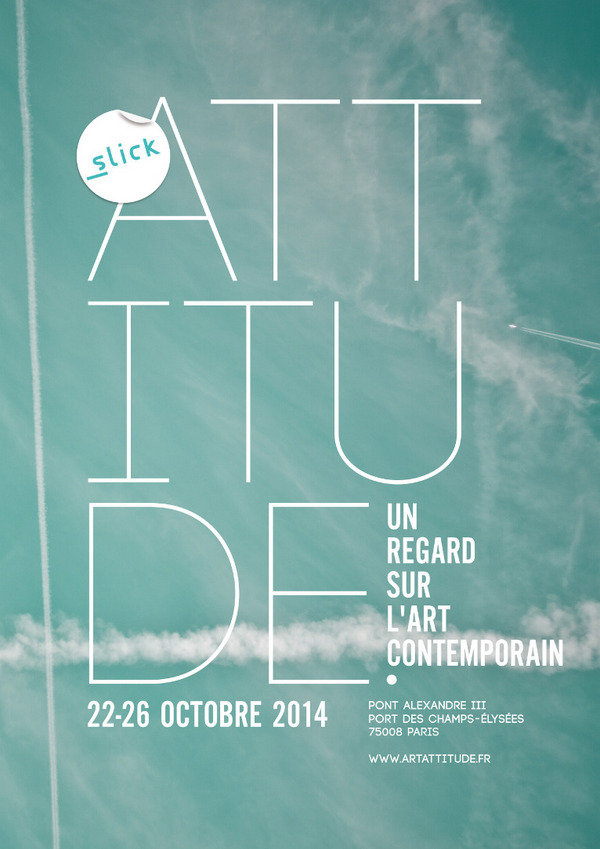 SLICK Attitude is the 9th edition of the SLICK fair. This year, this meeting space will bring together thirty galleries during contemporary art week in Paris. On the banks of the river Seine, just a few steps away from the Grand Palais where the FIAC will be hosted, these galleries will present their artists in generous spaces (list of galleries on page 4). A selection of about ten projects by emerging artists will also be exhibited on the Platform.

Over 13,000 visitors are expected, including collectors, entrepreneurs, business leaders, institutional repre sentatives, journalists and artists. All will converge at this special event to discover hundreds of artists, exhibited in a space designed for exciting discoveries:

THE PLATFORM
The Platform is an exhibition within the fair. New works can be discovered here, ranging from installations and sculptures, to video and photographic displays – all originally produced for this fair and exhibited in a specially-designed space. Since 2011, SLICK has presented ambitious projects, produced by artists and their galleries.

THE ARTE & BEAUX ARTS MAGAZINE PRIZE
In order to recognize the work of one of the artists presented on the Platform, Arte and Beaux Arts Magazine will reward one winning artists with a special prize (including a 5,000 euro grant and media exposure). The prize-awarding ceremony will take place at SLICK Attitude on October 23 at 12pm. The Jury composition, including personalities involved in the French creative world, will be announced end of September

THE COLLECTORS: A PRIVLEDGED RELATIONSHIP
Since it’s beginnings, SLICK has positioned itself as an alternative to traditional contemporary art fairs by creating an event that is on a human scale and that is based on two main pillars: art and people. Since the relationship between collectors, fairs and the art market is at the heart of SLICK’s reflections, SLICK Attitude builds on this legacy by being a place for discovering and meeting artists, in a space that stimulates discussions and networking:
- Each morning, from 10am to 12pm, the fair will open its spaces exclusively to VIP guests in order to give them time and space for appreciating the works and discovering new artists. Breakfast will be served.
- A Lounge Bar is being proposed by Red Design. The Scandinavian spirit of the 1950s meets contemporary Paris in a great spot for good times and stimulating meetings.
- Contemporary art experts from the Barter company will proposed thematic, guided tours.
- Partnerships between collector groups and companies are in place, so that their members and clients can be properly welcomed at the fair

SLICK Attitude HORS LES MURS / BEYOND THE FAIR
For those who wish to continue their visit through radio waves, Radio Nova will be broadcasting its special shows on Contemporary Art from SLICK Attitude, during the contemporary art week. Starting on October 22, the fair will be also be accessible online – with virtual visits and in partnership with Sisso company