Four Roads. The exhibition presents four central, large-scale installations from different phases of his oeuvre, and a concentrated group of objects and sculptures complements the retrospective. 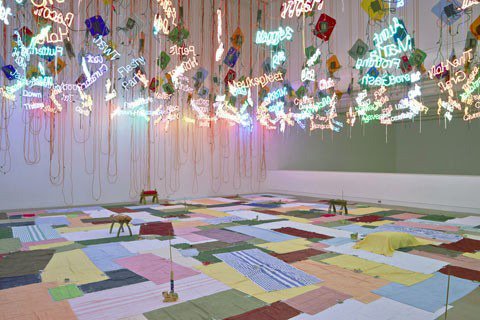 The Kunsthalle Bremen is presenting the first major exhibition in Europe of the American artist Jason Rhoades (1965–2006, Los Angeles), one of the most important artists of his generation. It is the only presentation in Germany of an international touring exhibition.

Rhoades's international breakthrough came in the early 1990s with spectacular and sprawling installations constructed from a vast range of materials and everyday objects ranging from neon, plastic buckets, power tools, figurines, sound and even a V8 engine. He was an exceptional and highly influential figure in the art world at the turn of the millennium. As a determined critic of American and European consumer culture and explorer of pop-cultural myths, Rhoades had a major impact in America as well as in Europe.

The exhibition Jason Rhoades, Four Roads at the Kunsthalle Bremen is the first retrospective of the artist's work since his untimely death eight years ago. It presents four central, large-scale installations from different phases of his oeuvre, which in turn embody four essential aspects of his work: Garage Renovation New York (CHERRY Makita), 1993, The Creation Myth, 1998, Sutter's Mill, 2000 and My Madinah: In pursuit of my ermitage…, 2004/2013. A concentrated group of objects and sculptures complements the four installations.

The epic, monumental, seemingly chaotic and yet deeply systematic works brought together in the exhibition powerfully represent the artist's vision of the world, which was conceived in universalistic terms. Rhoades devoted himself to the exploration of the big issues in life, without avoiding any moral, religious or sexual taboos. At the same time, his installations are engaging, provocative and humorous. His work still remains elemental and highly relevant today.