In keeping with the leitmotif of the steirischer herbst festival, the exhibition examines the loss of solidarity and territorial clashes -both from an individual and collective angle 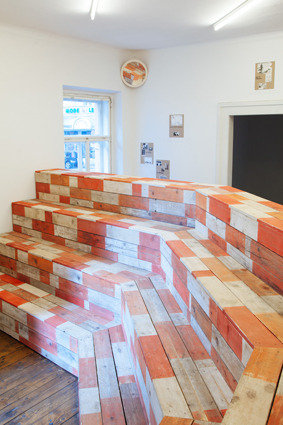 With: Ovidiu Anton (AT), Mark Boulos (NL/US), Armando Lulaj (AL), Tim Sharp (AT), Lerato Shadi (ZA/DE), Gaby Steiner (US/CH) & Gamlet Zinkovsky (UA). Curated by Anton Lederer (AT) & Margarethe Makovec (AT). More than 250 years ago, Jean-Jacques Rousseau described that fatal moment when the first man fenced in a piece of land so as to declare it his property. For Rousseau an impermissible act, as "the Earth [itself belongs] to nobody". But still the belief in property has started innumerable wars and crimes. In keeping with the leitmotif of the steirischer herbst festival, Rotor examines the loss of solidarity and territorial clashes -both from an individual and collective angle. On show are not only works that deal with the (self-elected) withdrawal of individuals or groups from our consumerist world. Also featured are works that talk about those regions of the world in which land grab and territorial exclusion are still common currency -reflecting a collective impotence in the face of existing, often postcolonial power relations founded on exploitation that allow the population no means of sharing in the wealth. Co-produced by steirischer herbst. (Image: installation in the entrance room by Ovidiu Anton, titled ''53,31m2 of Barriers'' 2014. In the back, part of series Awaiting the War by Gamlet Zinkovsky). Opening of the exhibition: on Saturday, September 27, 2014 at 10am.