Picasso & Jacqueline: The Evolution of Style presents the artist's devotion to Jacqueline Roque, his homage to Henri Matisse, and the inspiration he found in classical and modern painters. 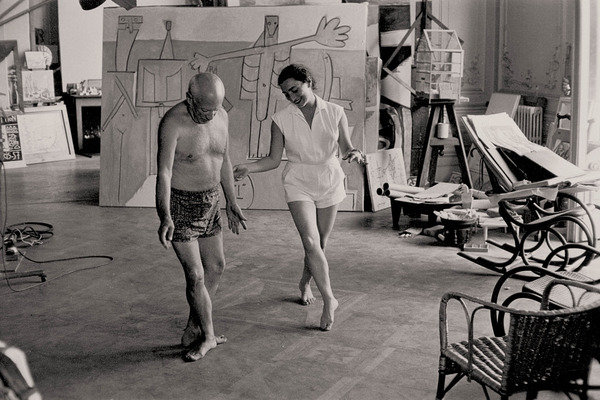 the Pace Gallery in New York presents Picasso & Jacqueline: The Evolution of Style, featuring nearly 140 works by Pablo Picasso created in the last two decades of his life while living with his muse, and later, wife, Jacqueline Roque. With many works from the Picasso family and Jacqueline Roque’s estate on view to the public for the first time, plus loans from private collections and major museums including The Metropolitan Museum of Art, The Museum of Modern Art, New York, and the Centre Pompidou, Paris, this exhibition is the first to examine Picasso’s late transformation in style, as seen exclusively through the portraits of Jacqueline, his last and perhaps greatest love. Picasso & Jacqueline features painting, sculpture, works on paper, and ceramics, all depicting Jacqueline in a myriad of ways—from odalisque to bride—that would immortalize her arresting beauty.

Picasso & Jacqueline: The Evolution of Style is presented at two Pace locations, the gallery in Midtown (32 E. 57th Street) and in Chelsea (534 West 25th Street). The exhibition begins in 1954 when the 73-year old Picasso started living with the 27-year old Jacqueline. That year also marked the death of Matisse, an early rival and later friend of Picasso, who had been the only living artist that Picasso considered his equal. In an unprecedented burst of creativity, Picasso put forth scores of paintings and drawings that showed odalisques as Matisse often did in his own art. This would begin a tremendously prolific period in which Picasso created a wide range of works spanning multiple mediums in an homage to Matisse following his death. It was also during this period he began to cast Jacqueline in his reworkings of French and Spanish masters like Velázquez, Delacroix, and Manet.

Accompanying the exhibition and complementing the works on view is a group of more than 50 photographs by David Douglas Duncan, one of the central documentary photographers of the 20th century and a confidant of Picasso. Having unfettered access to Picasso’s studios and homes, Duncan captured the artist at work and during private moments of his life with Jacqueline. The affection he felt for her is unmistakable both in photographs of the two, as well as in his portrayals of her, in which she is never disfigured like his earlier lovers. In many of the photographs she is seen wearing various costumes and accessories that Picasso incorporated into her portraits. Of Jacqueline, Duncan said, she “often appeared to be stepping out of one canvas into another of herself.”

Picasso & Jacqueline features eleven works from the artist’s Les Femmes d’Alger [The Women of Algiers] (1954-1955), an important series which was inspired by Eugène Delacroix’s 1834 painting of the same title and was also a tribute to Matisse in its use of abstraction and subject. Including five out of the fifteen oil paintings from the series, as well as an oil study, etchings, and an aquatint, this exhibition is among the most complete presentations of paintings and related works to the Les Femmes d’Alger series since the paintings were bought by the American collectors Victor and Sally Ganz in 1956.

With Les Femmes d’Alger Picasso set out on a course of reinterpreting great works by earlier masters, including his nod to Velázquez in Las Meninas (1957), and to Manet in Le Déjeuner sur l’Herbe (1959–1962), the latter represented in Picasso & Jacqueline by two oil paintings. Les Femmes d’Alger also predicted an era of works that were alternately fierce and tender, brutal and intimate. During this period Picasso evoked various phases of his own work, i.e., Fauvism, Cubism, Surrealism, as well as those of Matisse—the cut-outs and the odalisques with their heavily patterned Moorish backgrounds. In a matter of months, Picasso created a body of work that referenced the achievements of his career to that point, acknowledged his great respect for Matisse and French and Spanish masters, and pointed the way forward to an Expressionist style that served to influence later Neo-Expressionist artists.

In his essay which accompanies the exhibition, Jonathan Fineberg, the Edward William and Jane Mart Gutgsell Professor of Art History Emeritus at the University of Illinois at Urbana-Champaign, notes, “After The Women of Algiers, the empathy that emerges, and the new directness in his expression of his experience, is unprecedented in Picasso’s work. The drama of his previous relationships with women has mellowed and instead of finding another lover seven years after moving in with Jacqueline, as had been his pattern, Picasso married her in 1961 and then remained with her.”

The exhibition includes examples of particularly personal works such as Jacqueline Dressed as a Bride Full Face I (1961), which commemorates Picasso and Jacqueline’s wedding; and Jacqueline with Paloma and Catherine (1960), showing Jacqueline with her daughter from her first marriage, Catherine Hutin, and Paloma Picasso, the artist’s daughter with his companion of the 1940s and early 1950s, Françoise Gilot. Several variants of “Artist and his Model” and “Woman in the Studio” are also featured. A late work, from just four years before Picasso’s death, is the tender and nearly elegiac 1969 double portrait, Le Couple.

While both presentation spaces will feature portraits of Jacqueline, the majority of works at the 57th street gallery in Midtown will be works on paper, and the works on view at the 25th street Chelsea space will be paintings and sculpture, with examples in all media at both locations. The Chelsea space will also feature a room devoted to the etchings and paintings that Picasso made on the subject of Delacroix's Les Femmes d’Alger series.

Picasso & Jacqueline: The Evolution of Style is accompanied by a fully illustrated catalogue with essays by Professor Fineberg, on the evolution of Picasso’s style from 1954 to 1973; art historian and critic Barbara Rose, on Jacqueline as Picasso’s muse; and independent curator Daniel Leers, who writes a biographical history of Jacqueline and Picasso’s relationship. Rose notes in her essay, “As memory crowds out the present, Jacqueline becomes Picasso’s entire universe. She is everywhere, in his dreams, in his fantasies and in the representations of his ongoing personal theater. Jacqueline is the ultimate muse because he sees through her the muses of his own heroes El Greco, Velazquez, Delacroix, and Manet.”
* Barbara Rose, from her catalogue essay