Kinetic Action. The exhibition will be opened to the public, before the official exhibition opening, as a unique occasion to see the artist at work. The gallery will be transformed in a huge workshop before getting back to its initial aspect. 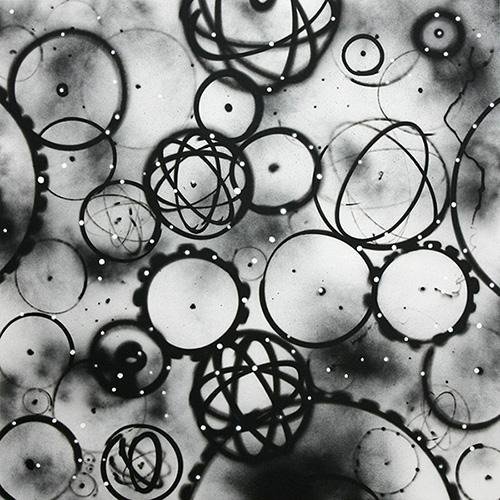 Born in 1955, FUTURA starts in the 70s on New york subway cars with artists such as ALI, QUIK, etc. In 1981, he also meets with Keith Harring and Jean-Michel Basquiat, especially for the group show New York/ New Wave. The following year, in 1982, his first solo show takes place at the Fun Gallery in New York. FUTURA is has early had museum exhibitions and since then he has greatly contributed to have street art in museums

FUTURA is known for being the for the first artist who painted an abstract “whole-car”. At first glance his style is graphic, then he develops it step by step into a universe made of geometric and dazzling colour forms. These round and supple forms, coloured, give form to a real cosmos. His spheres, as some planets, look like simplified satellites in a weightlessness made of coloured clouds. The absence of figuration and the atmosphere coming from his pieces place him as the heir of abstract expressionist such as the famous American Jackson Pollock. Often in large dimensions, his pieces seem to be an open-door to escape, encouraging people to have their own interpretation. FUTURA clearly stands out from the other street artist not only because of his unique style but also because of the special place he has on international Street Art scene: everywhere he is considered as a real legend.

More than 30 years after his first graffiti, FUTURA comes to China with a set of pieces painted exclusively for the exhibition. The exhibition will be organised around two important moments. First, the “work in progress” will be opened to the public, before the official exhibition opening and the hanging of the pieces on the walls. As a unique occasion to see the artist at work, the exhibition wants to enhance the interest of this creative moment that the artist exceptionally accepts to share. In this way, the gallery will be transformed in a huge workshop before getting back to its initial aspect.