This land is your land

The 90s in Portugal in the Encontros de Fotografia Collection. The exhibition shows a selection from several different photographic series that present different subjects related to the social and territorial reality of Portugal. 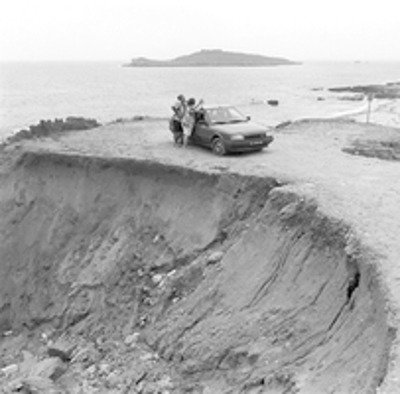 'This land is your land' is an exhibition that for the first time brings together a selection from several different photographic series carried out in Portugal throughout the 1990s. the images were initially produced in the context of commissions by the Encontros de Fotografia to about forty Portuguese and foreign photographers for them to tackle different subjects related to the social and territorial reality of Portugal. These projects – Vale Mondego [Mondego Valley] (1993), Itinerários de Fronteira [Border Itineraries] (1994), Terras do Norte [Northern Lands] (1995), Sul [South] (1996) and Linha de Fronteira [Border Lines] (1997) – have been successively presented in exhibitions and books in the annual publications by the Encontros de Fotografia.

In the line of other seminal projects in the History of Photography of the Twentieth Century, such as the Farm Security Administration (1935-1942), in the United States of America, the Survey on Regional Agriculture in Portugal (1955-1957) and, above all, the DATAR Mission Photographique (1983-1989) carried out in France, these photographic works, in their scope and diversity, form a complex and suggestive portrait of the state of the country in a decisive period of its recent history, about twenty-five years after the 25th of April 1974 coup d'état, a decade after Portugal joining the EEC and shortly before the inauguration of the Expo 98 World Fair. Between what we see and infer in the images and their inevitable confrontation with the contemporary situation, these photographs give rise to a historical analysis and critical perception of the socio-economic and political conditions and correlated effects on the daily reality of the lives of people and places.

The exhibition contains about 120 photographs by 15 photographers: António Júlio Duarte, Cristina Garcia Rodero, Christophe Bourguedieu, Daniel Schwartz, Debbie Flemming Caffery, Duarte Belo, Frédéric Bellay, Gabriele Basilico, Hugues de Wurstemberger, John Davies, José Manuel Rodrigues, Larry Fink, Mark Klett, Nuno Cera and Paulo Nozolino. The thematic tendencies include: the historical and symbolic memory of places; the transformations on the landscape and the increasingly precarious nature of rural life; the dynamics and the methods of occupying the territory; the confrontation between the old city and urban renewal; urban pressure and unbridled and unorganised growth of the cities; and the indications of social de-structuring and exclusion. Small formats and black and white photography predominate. However, the photographic imaginaries and genres are very different, ranging from the more objective documentary approaches anchored in sobriety and formal contention to the more explicitly subjective, lyrical and metaphorical attitudes.

The title This land is Your Land quotes the famous song written by Woody Guthrie in the nineteen-forties, during the after-effects of the Great Depression. A reference that helps us re-centre the vocation of the images, or, more specifically, the vocation of photography as a privileged means for the gauging of reality, as a medium aimed at appealing to memory within the current condition and to the understanding of the current situation within history.
Sérgio Mah