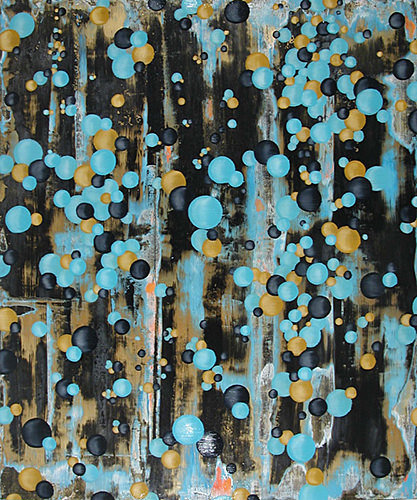 Brian Gross Fine Art is pleased to announce an exhibition of recent abstract paintings by San Diego artist Rex Yuasa, on November 1. On view will be eight mixed media paintings that explore our perception of the sublime through optical and dimensional illusions. Through multiple layers of prismatic color and glistening glazes, Yuasa creates mesmerizing arrays of complex harmonies. Nascent will be on view through December 20, 2014.

Working with non-traditional paints and materials such as fluorescent undercoats, metallic and pearlescent paints, and iridescent finishes, Yuasa creates vivid fusions of pigments and lustres. Layering acrylic, oil and alkyd paints, Yuasa develops crumbling and crackling surfaces that fade and flicker in the distance, while gleaming spherical globes swell and float through space. By placing energetic yellows over faint purples or glowing pinks over deep blues, Yuasa forms color interplays that establish immense dimensionality, transcending and elevating the canvas. These shimmering hues and hyper-stylized pigments converge and disperse creating an electrified expanse of activity.

Yuasa’s interest lies in the illusion of painting and its ability to embody the sublime. He states, “This notion of illusion manifests itself in many different ways, such as the idea of void as a non-signifiable space, the implication of order, structure and chaos, or the myth of the sublime and beauty.” Through his depiction of dimension, gravity, and volume, Yuasa reveals this void, a space without structure or narration, while simultaneously conveying movement, vibrancy, and mood.

Born in Tokyo, Yuasa received his B.F.A. in 1990 at San Diego State University, and his M.F.A. at California Institute of the Arts in 1992. He has exhibited in museums and galleries in both the United States and Japan, and his work is in numerous public and corporate collections including the Museum of Contemporary Art Tokyo, Japan; the Nerima City Art Museum, Tokyo, Japan; and the Tochigi Prefectural Museum of Fine Arts, Tochigi, Japan. The artist currently lives and works in San Diego, CA. This is Yu

Using layers of shimmering pigments suspended in urethane, Kotler paints with subtle value shifts and chromatic complexities that inspire internal contemplation. Forming delicate variations of light and color resonance within a reductive field, Kotler aims to quiet the mind and induce calm reflection. I Look for Light will be on view through December 20, 2014.

Rooted in color theory and psychology, Kotler’s radiant new series explores the visual phenomena of color and light through the layering of liquid pigment and captured illumination. Through a combination of blending and pouring of translucent glaze, Kotler accentuates the gesture and movement of the material, allowing the hues to shift from light to dark. Each additional layer intensifies the vibrancy of the colors below, amplifying the paintings’ capacity for luminosity and depth.

The manipulated urethane, infused with incandescent hues and metallic fragments, solidifies and freezes mid-motion, capturing a sea of stirring color and radiance. The result is a shimmering surface that shifts with changing light, position, and point of view. Kotler states, “Much like standing before a vast ocean or river, where water offers a sense of perspective, expansiveness and serenity; so too these paintings serve as a space for reflection.”

Kotler received her B.A. in 1993 from Barnard College of Columbia University and her M.F.A. from the San Francisco Art Institute in 2006. Her work has been shown at di Rosa in Napa, The Berkeley Art Center, Palm Springs Art Museum, SFMOMA Artists Gallery, and the UCSF Women’s Health Center. Her work is represented by galleries across the US and collected internationally. This is her second solo exhibition with Brian Gross Fine Art.