Certain Ideas. The exhibition provides an overview of more than a half a century of this artist's ongoing productivity. It illustrates the great multidimensionality that is the hallmark of Baruchello's work. Driven by his natural scientific inclinations, he searches for points of contact at the interface of art and man, life and matter. 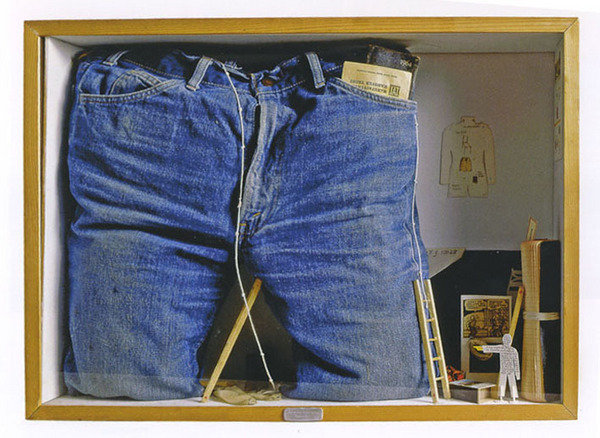 The ZKM | Museum of Contemporary Art frequently holds presentation s of artists who have been ignored or forgotten by the mainstream and art market in loose series. In many cas es, these artists have provided important impulses in contemporary art. I n this con text, t he work of Italian multi - media artist Gianfranco Baruchello will be presented in a showcase from November 0 1 , 2014, and will run till March 29 , 2015 . The exhib i- tion is co - curated by Andreas Beitin a nd Peter Weibel . The exh i- bition, jointly organized with the Deichtorhallen Hamburg / Sammlung Falckenberg , not only offers an overview of over half a c entury of art production , but also the sheer versatility of B a- ruchello’s work , an artist who over several decades produced a substantial o euvre of pictures , sculptures , object cabinets , c o l- la ges , t ex ts as well as films.

Gianfranco Baruchello ( born in 1924 in Livorno), was a member of the European a vant - garde during the 1960s . Driven by his natural scientific inclinations , he sought points of unity at the interface of art and man, life and matter . In Baruchello’s work such moments of f usion occur in a b road range of media, coming to expression no less in his founding a rural commune inspired by Joseph Beuys’ idea of “social plastic”

Much like Marcel Duchamp, with whom he was a close friend B a- ruchello was drawn ear ly on to the use of found forms and colo rs, the objets trouvé. Here, he went beyond Duchamp, not only connecting , bu t also creating abstract works from found objects , the fusion of the autonomous parts of which , in turn, g ave rise to extraordinary forms . He connected the strategies of Abstract Expressionis m and Pop Art – about which he became fascinated during his travels through America (1964) – with his own composi tions, thereby creating a markedly individual pictorial language : on canvasses with white grounding, he created an entire world of different figures and symbols , also called “c haracters ” , which he connected to a network resem bling a neurona l s ystem.

Alongside his work with language expressed in the form of puns, rhyme experiments and the shaping of individual and special publications ( e . g . Mi viene in mente , 1966), Baruchello then found his way to the medium of film . He produced his first Super8 film Il grado zero del paessagio in 1963. In 1964, h e produced his first 16mm f ilm Verifica incerta , asse m- bled from ‘found ́ scenes . W orking with video camera became increa s- ingly important for him o ver time . Above all, the processing of the m e- dium and media content shifted to the foreground from around 1970 onwards – as for example the work Foto piccolissime representing the arbitrary and massiv e ly reduced photographs of the German television program.

The founding of his own artists association , the Agricola Cornelia S.p.A., i n 1973 , was only one of the logical step s of Baruchello ’s ongoing ec o- logical concerns following his participation in various internatio nal ar t- ists ’ groups (E.A.T., Artiflex). With the aim of finally unify ing art and life, and of culti vating land, he created a synergetic dovetailing of art, agr i- culture and animal husbandry by founding an artists’ farm, and thus took seve ral greater steps than many other artists of his time whose intentions, though similar, remained in the sphere of theory.