The second exhibition of the cycle "Collection on Display" is about excess in terms of form and motif, addresses painting and drawing in a broad sense. Since the 1960s, the authenticity of Dorothy Iannone's work has contributed to openness about sexuality and the strengthening of female autonomy. 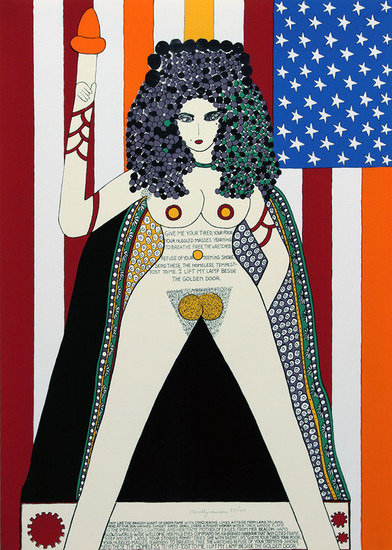 Dorothy Iannone
Censorship And The Irrepressible Drive Toward Love And Divinity

Since the early 1960s, Dorothy Iannone (b. 1933 in Boston, lives and works in Berlin) has been actively exploring ways of representing unconditional love. Her oeuvre encompasses paintings, drawings, collages, video sculptures, audio pieces, objects, and artist’s books. A narrative element grounded in literature, history and mythology, as well as in personal experiences, feelings and relationships, runs through these works.
This, her first major solo exhibition in Switzerland, retrospectively sheds light on Dorothy Iannone’s work, starting with her artist’s book The Story Of Bern , which she created in 1969 in response to the censorship of her artworks. Since the 1960s, the authenticity and originality of the artist’s work has contributed to openness about sexuality and the strengthening of female autonomy. When bringing her works to the public, she manifests keen understanding in handling subject matter that remains often uncomfortable and controversial, even today.

The Migros Museum für Gegenwartskunst presents a retrospective selection from fifty years of Dorothy Iannone’s oeuvre, a body of work that may be considered an ongoing multifaceted artistic quest into the ecstatic experience of love and its companion idea, unconditional love. Although Iannone’s visualization of sexuality was congruent with the zeitgeist of social change in the 1960s and 1970s, her images conflicted with prevailing concepts of morality. With her art, Iannone eludes social, normative and artistic restrictions and any attempt at definitive attribution. Her imagery has affinities with Pop Art, Art Brut and the contemporary genre of the graphic novel. Especially striking are schematic genitals visible on stylized bodies – frequently in combination with explicit texts, as in the works Let Me Squeeze Your Fat Cunt (1970/71) and I Begin To Feel Free (1970), two in a series of large-format paintings depicting some of the many variations of love play.
The starting point and backbone for the Zurich show is Iannone’s book Censorship And The Irrepressible Drive Toward Love And Divinity (first edition: 1982), in which Iannone recounts her years of experiences with censorship. The book is being published in a new form, augmented by two essays, in conjunction with the exhibition. Iannone starts by relating a key event that occurred when airport customs officers in New York confiscated Henry Miller’s books, which she was bringing back from a trip to Paris. With the renowned American Civil Liberties Union (ACLU) representing her, she successfully contested that seizure in 1961, paving the way for Henry Miller’s books to be legally imported into the USA. Iannone also reports on censorship of her own works at a number of exhibitions, crucially at the group exhibition Freunde ( Friends ; 1969) at Kunsthalle Bern. Swiss artists Daniel Spoerri, André Thomkins, Karl Gerstner and Dieter Roth had invited their artist friends to contribute works to the show. Iannone was one of the invited artists; however, she was urged, even by some of her colleagues, to preemptively self-censor her works. Iannone refused, and shortly before the opening her drawings were summarily removed. The next day Roth, in solidarity, removed all of the works in his section of the exhibition (works by Roth, Iannone and Emmett Williams). The whole story is told in her 1969 artist’s book The Story Of Bern , and the entire series of original drawings for the book is being shown in this exhibition.

As the title Censorship And The Irrepressible Drive Toward Love And Divinity indicates, the mythical dimension of Iannone’s body of work is highly significant. Iannone develops her own cosmos of images that revolves around the philosophical concept of Eros. Implicit in this concept is the idea that human beings are deeply moved by a yearning for union. Desire is therefore conceived as a supremely natural force whose wellspring is love, ecstasy and the dissolution of ego – a human striving toward physical-spiritual unity.

In addition to the presentation at the Migros Museum für Gegenwartskunst, Iannone’s oeuvre was the subject of a 2014 retrospective at the Berlinische Galerie, Museum of Modern Art, Berlin. Her works have also been comprehensively shown in recent years at the Camden Arts Centre, London (2013) and at the New Museum, New York (2009).

Collection on Display presents selected works from the collection of the Migros Museum für Gegenwartskunst.

The second exhibition of the current cycle, which is about excess in terms of form and motif, addresses painting and drawing in a broad sense. This part is not only about works that contribute to the writing of painting’s history, but also those that take a humorous look at the history of painting and deal with the role of the artist in an ironic or self-deprecating manner.
The centerpiece of the exhibition consists of works shown as part of a collection exhibition for the first time: The Laundry Room (2007–2014) by American artist Richard Jackson and Variation über ein Thema von Kasimir Malewitsch – Variation on a Theme of Kazimir Malevich (2011) by Polish artist Robert Kusmirowski. These two larger installations are supplemented by works from John Armleder, A.R. Penck, Markus Raetz, Gerhard Richter, Pamela Rosenkranz, Niele Toroni and Christopher Wool, which address painting's heritage and connect with the discourse on the effect of painting.