A three-person exhibit of abstract paintings by Ford Crull, Peggy Cyphers and Debra Drexler. Landscapes, figures and forms emerge and dissolve; sending messages from the unconscious, of spirituality and healing. 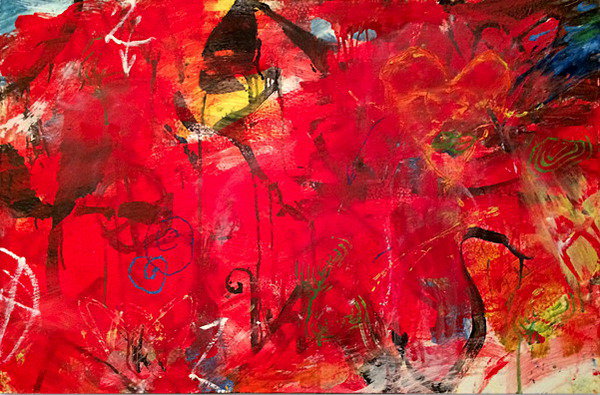 Van Der Plas Gallery is pleased to announce Red, Yellow and Orange: a three-person exhibit of abstract paintings by Ford Crull, Peggy Cyphers and Debra Drexler. Landscapes, figures and forms emerge and dissolve; sending messages from the unconscious, of spirituality and healing.

American painting has always had a long-standing preoccupation with the sublime, defining the American character based on its relationship to the country’s wild, beautiful landscape. In New York today, there is a Renaissance of abstract painting, as painters reinterpret and reinvent the paradigms that have shaped the field. The work of Crull, Cyphers and Drexler represents the best of contemporary abstraction: which is skilled and confident while demonstrating courage and invention. The contemporary sublime puts us in touch with what is elementally human, by erasing personal boundaries and supplanting surety with uncertainty and awe. The work of Crull, Cyphers and Drexler assert the primacy of painting by offering an unabashedly transcendent experience through the medium of paint. Archetypes of shadow and light reveal themselves, red, yellow and orange reflected in the water of life.

Ford Crull continues to explore the expressive power of personal and cultural symbols in a series of densely painted and vividly colored compositions. “Ambiguity of the image forces the viewer into a more intensive study of the work, so that the deeper layers of reality are unveiled...This is the real pleasure of my painting: to present a tableau of associations, an unceasing unfolding of meanings, to offer a glimpse of a more universal state of consciousness, unbound by the limitations of time and convention.”.

Ford Crull was raised in Seattle, where he graduated from the University of Washington. His work is in the collections of the Metropolitan Museum of Art, the National Gallery, Dayton Art Institute, and the Brooklyn Museum. His paintings were included in the important 1989 Moscow exhibition, “Painting After the Death of Painting,” curated by Donald Kuspit. Recent exhibitions have included shows in Shanghai, London, Milan, and Seattle.