The Gardens of Sardinia, Cyprus and Jerusalem is a project by the Italian artist Paolo Chiasera. Charlotte Moth presents a new film The story of a different thought that explores the secrets and shortcomings of an architectural Gesamtkunstwerk. 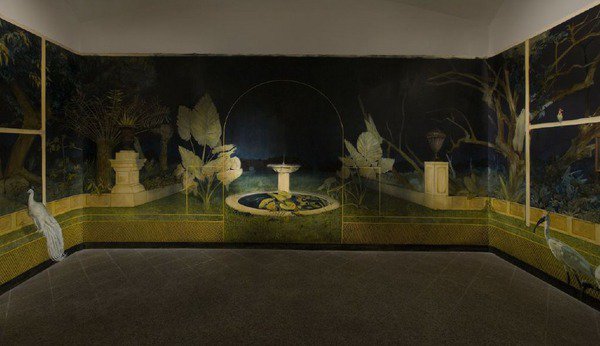 The Gardens of Sardinia, Cyprus and Jerusalem is a project by the Italian artist Paolo Chiasera realized both at MAN Museum of Nuoro in Sardinia (Italy) and De Vleeshal centre for visual arts in Middelburg (Netherlands).
d Style”, refers to a stylistic development in Roman art, characterized by the emphasis on power of imagination. This imaginary represents the ideal space for experimentation and the definition of artistic production following new modes of exhibition.

With The Gardens of Sardinia, Cyprus and Jerusalem, Secondo Stile enters the museum for the first time. In this context Paolo Chiasera reflects on the recurrence of the life cycle, symbolized in palaeolithic and neolithic culture, which is permeated by a religion closely connected with the cult of the Mother Goddess, nature and her manifestations in earth and water. Through reflections on the cyclic nature of life and human history, cultural heritage in different historic periods and territorial contexts, Chiasera has arrived at a singular interpretation of the permanent collections of the museum of MAN and De Vleeshal, in a vision that weaves together archaeology and the contemporary world.

Starting from the emotions stirred by a visit to the gardens of the 18th-century Villa d’Orri in Sarroch, Sardinia and the atmosphere of the Augustan Villa of Livia in Rome, Paolo Chiasera evokes a nocturnal garden on canvas, in the space of which, together with the co-curator Micaela Deiana, he proposes a selection of works from the collection of De Vleeshal.

In the gothic space of De Vleeshal the Garden of Sardinia, Cyprus and Jerusalem will incorporate the ceramic installation The ground of the Sea (2009) by Katinka Bock, which analyses how elements of a space may display the traces of time. This work from the collection of De Vleeshal creates a relationship between the space’s interior and exterior landscapes, and relates to the longstanding Dutch tradition of landscape painting. The sculpture Illuminati (2009) by Riccardo Previdi, is a self-supporting structure made up of polished and varnished aluminum tubes. Like the scattered sticks of the game “Mikado,” the tubes draw and reflect lines of color on the regimented black and white pattern of the flooring, blending together the characteristics of the architectural environment. The third work from the collection, also specifically related to the exhibition space of De Vleeshal is the documentation of Innere Stimme by Olaf Nicolai, a continuous performance that took place at De Vleeshal in 2010. It is based on Robert Schumann’s Humoreske Opus 20 for piano, a composition written for unaccompanied piano, where the middle staff cannot be sung, but the melody will influence the interpretation of the piece. The audience of the music, unable to see the score, can only imagine the influence of the “Inner Voice”. The dialogue between the three works and The Gardens of Sardinia, Cyprus and Jerusalem will be accompanied by photographic documentation of the solo-exhibitions of Bock, Previdi and Nicolai at De Vleeshal, paying homage to the artistic direction of De Vleeshal’s former director Lorenzo Benedetti.

Charlotte Moth
The story of a different thought

Marl – a Ruhr city as an urban utopia? Inspired by the now legendary 1950s urban planning project in Marl, British artist Charlotte Mothʼs new film The story of a different thought (2014) explores the secrets and shortcomings of an architectural Gesamtkunstwerk and the many stories entwined within this “modernism indebted” building complex. The film was made as part of the Production Grant given by the Kunstproduzenten, Cologne, marking the first of its grants to a young, German or international artist in the field of electronic and digital media.

Institutional partners 2013/2014 are the Dutch art foundation De Vleeshal, Middelburg, and the Glaskasten Marl Sculpture Museum. In 1957, a competition was held to overhaul the city centre in Marl, North Rhine-Westphalia, a once prosperous Ruhr city. The Rotterdam architectural office Van den Broek and Bakema won the competition, beating out prestigious colleagues such as Alvar Aalto, Arne Jacobsen, Hans Scharoun and Rudolf Schwarz with a radical, now seemingly utopian design. They proposed a highly experimental and risky project that integrated both the latest technologies and materials, reflecting on the economic growth of the city in many ways: a building complex was realised with a floating roof structure, and towers with office floors suspended externally from the top down.

The story of a different thought is a collage of photographic, cinematic, archival and scientific materials that conjure associations with various documentary, artistic or poetic roots, interlinked with universal principles of “flotation and suspension”. The development of conversations with architect Rebecca Loewen of DIN projects in Winnipeg, Canada and Texan writer and poet Joshua Edwards form important tangents in the thinking process surrounding the discoveries and mysteries of Marl as a site.