Her point of departure is the everyday: she paints scaffolding, timberwork, and bricks, alluding to documentary photographs of building sites she's found in family photo albums. 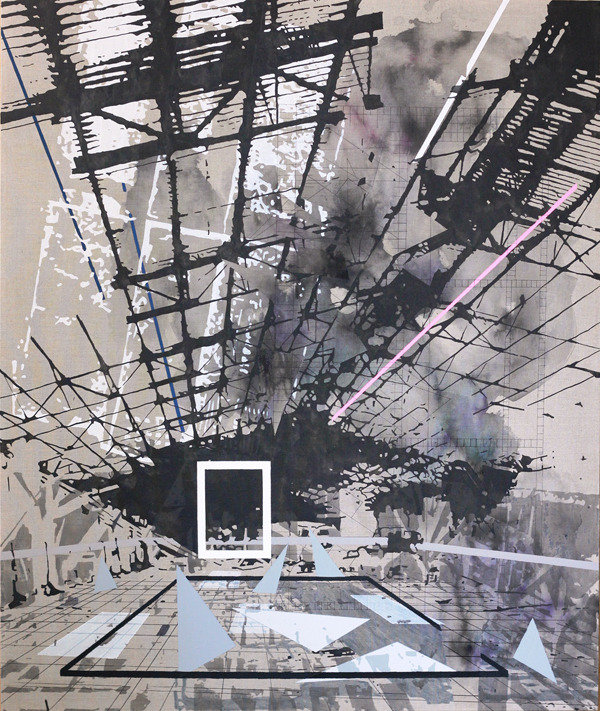 The fourth artist presented as part of the Draught exhibition project dedicated to young(er) artists and fresh ideas is Suzana Brborović.

Suzana Brborović (b. 1988) is an insightful young artist, winning two prestigious awards while still just a student: the ESSL Award for young artists from Central and South-East Europe in 2011 and the Student Prešeren Award in 2012.

In 2013, Brborović graduated from the Academy of Fine Arts and Design in Ljubljana; this year she begins a two-year postgraduate program at the Academy of Visual Art in Leipzig, where she now lives and works. Her work is included in the collections of the Essl Museum and the Božidar Jakac Gallery. Over the past three years her art has also been featured in several solo and group shows. Her more prominent solo showings include Saturation Limit at the Alkatraz Gallery, Distortion at the Meduza Gallery, and Reflected Shift at the Bežigrad Gallery 1. This year she also took part in the group show Contemporary Slovenian Painting (First Generations in the 3rd Millennium).

Brborović's point of departure is the everyday: she paints scaffolding, timberwork, and bricks, alluding to documentary photographs of building sites she's found in family photo albums. As a member of a generation that was early on introduced to the rude reality of the economic crisis she's well aware of what it means to be an artist today, and understands the importance of a range of critical social issues and the problems inherent in modern urbanization.

The works at the Triple Section exhibition connect urban situations in Brborović's two cities of residence. Though the works form parts of different series, the works on show here tell a tale of industrial areas and housing developments built during the socialist era. The two towns (Leipzig and Kranj) share a similar past and are currently facing the same problems arising from today's neoliberal politics: like new, high-end residential buildings standing unoccupied owing to high prices and instead being left to fall into neglect and disrepair.

The paintings Parsing of the Object (2013) and Structural Saturation (2014) make reference to industrial plants and housing developments built for working-class residents. The painting Olbrichtstrasse, made in Leipzig, takes inspiration primarily from old industrial areas that fell into decline during the shift in political regimes characterized by privatization and changing demographics. The collapse of a large part of industry in Leipzig in the 1990s proved disastrous for the city and its residents, with the consequences still evident to this day. Olbrichtstrasse deals with two components: construction and ruins. In all three paintings the initial grid composition is complemented with found material, in turn constituting a basis for further creative investigations.