Light Carries Information. The artist presents new works were carefully selected from a series of photographs taken of 2006 Land Art installation on Antarctica's Ross Ice Shelf. The film, Stellar Axis: Antarctica, will play throughout the opening. 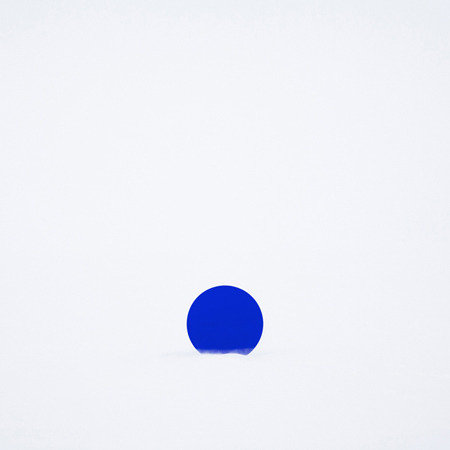 With the help of NSF astronomer Simon Balm, Albuquerque created a star map of the 99 brightest stars and their constellations visible at the South Pole during the four-week stay, creating a reverse sky onto the ice. She deployed 99 ultramarine blue fiberglass spheres of varying diameters positioned on the ice, from ten inches to four feet, to represent the relative magnitude of the stars. The project imaginatively links the stars through both poles as a shaft of light aligned with the rotational axis of the Earth, creating a double helix that is a metaphor for the conveyance of information—a kind of stellar DNA.

Stellar Axis was the first large-scale artwork created in Antarctica. Considered a milestone of contemporary Land Art, the installation was regarded as both a stunning and ecologically sensitive intervention on the continent. The project received international acclaim. A full exhibition of the photographs, film, objects and archive materials related to this project are on view at the Nevada Museum of Art until January 4, 2015, and the USC Fisher Museum of Art will host Albuquerque in 2016 for an exhibition featuring performance, film, writing and photographs relating to the project.

The film, Stellar Axis: Antarctica, will play throughout the opening. The roughly eight-minute film, shot by Lionel Cousin and directed by Jon Beasley, acts as a visual vehicle that transports the viewer to Antarctica and situates Albuquerque’s artwork in this mysterious landscape. Accompanied by an original score by Beasley, the film captures the essence of this important artwork that is at once haunting and solemn.