Matsushima-Paris-Santiago. For this exhibition the artist presents a series of photographs and drawings around the motif of a star which appeared in his work in 2013. After the circle and the square which characterise the artist's graphic vocabulary. 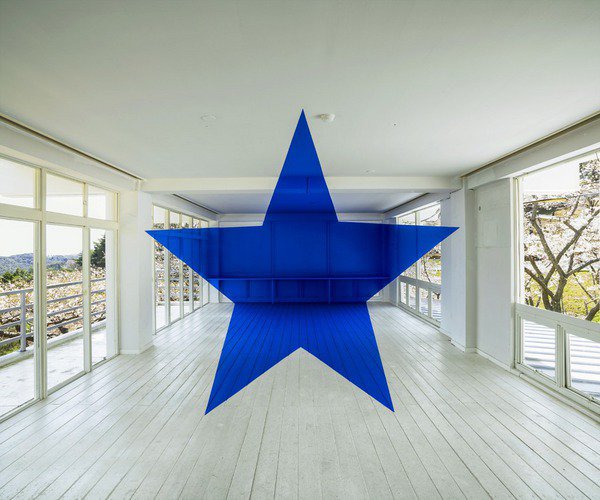 For this new personal exhibition of Georges Rousse, the Gallery Catherine Putman has chosen a series of photographs and drawings around the motif of a star which appeared in his work in 2013. After the circle and the square which characterise the artist’s graphic vocabulary, the geometrical form of a five-branch star is a new proposition within the field of drawing in space created by its anamorphoses. Beyond the obvious complex plastic features typical of this form realised by the artist in the depth of the space, a star has of course strong and pluralistic symbolic meanings, of which the first possible one is that of light, the central question in the work of Georges Rousse.

The exhibition presents therefore, through a selection of watercolours and photographs, three very different accomplishments.

«Matsushima», 2013: is the first time that a star appears in an installation of Georges Rousse. The Loin café, the place of exchanges and mediation, created in 2007 on the hill in the region of Fukushima in Japan, finds itself abandoned following the tsunami in 2011. Georges Rousse knows well Japan, in particular after having worked in Kobé following the earthquake of 1995. Again, it is the Japanese who ask him to come work in a place marked by a seismic scar and condemned to demolition. It is the haikus which inspire him a drawing of a star; those small, extremely brief poems speak to him since they re- fer to his own work: the simplicity of their form aims to express evanescence of things. Two stars, one positive and the other negative, appear in the space open to nature. The realisation of the installation had begun under the last snow of April, to be accomplished by the final shooting the day of the cherry blossom (the essential reference of haikus to the seasons is there): the star symbolizing a desire of survival of a place devastated by natural catastrophes.

«Samaritaine», 2013: in the famous Parisian department store, now closed, the superb watercolours reveal to us several projects imagined by Georges Rousse who plays with the interior architecture typical of the 1900 department stores, projecting for example the anamorphoses taken in a low angle shot on the balustrades of several floors of the shopping arcades. Foreshadowed by two luminous watercolours, the installation finally realised is an anamorphosis of a star within one of the polychromic domes of the buil- ding. The choice of the gold leaf, guided by fabulous light that this material releases, also brings to us the past magnificence of this place of Parisian luxury, today abandoned and waiting for its rehabilitation. Far from meditation and harmony with nature seeked for in the Japanese installation, the star appears here as a symbol of the past hour of glory and the announcement of renewal.

«Santiago», 2013: at the occasion of the major retrospective at MAC in Santiago, reali- sed in collaboration with the ITAU Foundation in Chile, Georges Rousse created an ex- clusive installation in the main hall of the Contemporary Art Museum. This time it is not only through painting but also through elaboration of a complex architectural construction that the artist makes a star appear. He had a replica of the architect’s house of Valparaiso constructed, which is situated at the seaside of Ritoque (the region visited in the 70s by the Chilean artists, with a view of creating a living place in synergy with poetry, painting and literature...). Georges Rousse troubles the neoclassical architecture of the museum by the introduction of this contemporary construction. The graphic purity of its lines and the black and white contrast with the technical complexity of this “archi-sculpture”: black architecture within which he sculpted a star, itself painted in white, always according to the rule of anamorphosis.

The watercolours, sometimes close to an architectural drawing, picture well the work of elaboration and search of depth of this installation: these drawings also reveal to us other projects imagined by the artist for this place: « Sueño » reminds us that the drawing re- mains for Georges Rousse the free field for his dreams and his projections, without tech- nical and material constraints which then impose themselves during the realisation of his work.

The Gallery will present as well its latest publications, the photographs of recent installa- tions reflecting his work across the world. At Phnom Penh in Cambodia at the occasion of the Photo Phnom Penh in 2012; in Marseille in 2013, the year of Marseille Provence European Capital of Culture, at the abandoned former sanitary post; at Seoul, the same year, at Seoul Art Center where a large exhibition had been devoted to him, and finally in Bordeaux, at the submarine base, where the exhibition «Georges Rousse: Espace(s) - Métamorphoses poétiques» takes place until the 14th December 2014.