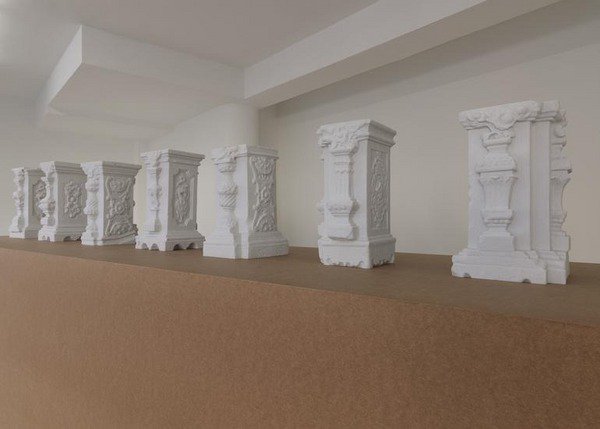 James Cohan Gallery is pleased to present a group exhibition entitled By Proxy, opening on November 20th, 2014 and running through January 17th, 2015.

Marcel Duchamp called it "aesthetic osmosis," the process by which an artist transfers responsibility to a viewer, empowering them to complete the work out in the world. This idea, of art as shared enterprise, is the theme of this exhibition. Here, the word proxy encompasses the tools and techniques that complete artworks away from the artist’s hand. This exhibition is concerned with those tools and techniques, the effects they can have, and the instances when an idea calls for more than just the artist to take form.

Production, outsourcing, interactivity and appropriation have become increasingly mainstream modes of artistic expression over the past 100 years. The shared enterprise, in which the artist somehow cedes responsibility for the final work, now takes many forms: from fabrication and machines to chance, games, relational practice and the increasingly fertile landscape of the internet. By Proxy includes Marcel Duchamp’s assisted readymade With Hidden Noise, a ball of string with an unknown object rattling inside it; embroidery works by Alighiero Boetti; three drawings from John Cage’s 1990 series River Rocks and Smoke, in which chance operations are performed by smoke settling in the fibers of the paper; Oliver Laric’s Yuanmingyuan Columns, a new work created with 3D scans of Chinese cultural artifacts ensconced in Bergen, Norway; Yoko Ono’s seminal chess set and war allegory Play it By Trust; and a work from Xu Zhen’s recent Eternity series, which juxtaposes the East and West by mounting headless replicas of key Hellenistic and Buddhist sculptures neck to neck.