Migration of Signs. The exhibition highlights mixed-media works on paper created by Hassan in the last four years. These compositions serve as allegories of the Arab Spring, transnational migration, and Nubian folklife. 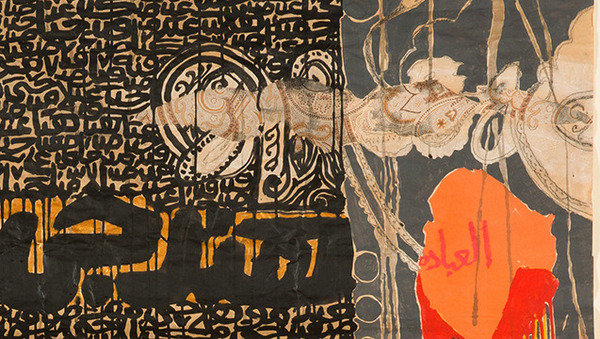 The Williams College Museum of Art (WCMA) presents Fathi Hassan: Migration of Signs on view November 22 through April 26, 2015. For thirty years, Egyptian-born Nubian artist Fathi Hassan has created mixed-media works that explore the ambiguity of language. His best-known paintings, drawings, and installations are comprised of intentionally indecipherable Arabic calligraphy. These text-based works embody the alienation of being faced with language-and by extension a culture-that cannot be read, interpreted, or decoded.

The exhibition highlights mixed-media works on paper created by Hassan in the last four years. These compositions serve as allegories of the Arab Spring, transnational migration, and Nubian folklife. They also reflect the artist's continual use of visual signs to capture contingent, unspeakable, and intangible sensory experiences. In them, we find the central message of his art: the meanings and interpretations of symbolic signs are not fixed; they shift over time and as they migrate from one context to another.

'The exhibition gives WCMA's audiences the chance to reflect on migration, an issue of great significance to Fathi Hassan,' says Maurita Poole, exhibition curator and Mellon Curatorial Fellow for Diversity in the Arts. Fifty years ago 100,000 Nubians were displaced by the construction of the Aswan High Dam in Egypt. 'Early in his career, Hassan used Arabic calligraphy to give form to Nubian loss and displacement,' explains Poole, 'The works in the exhibition, however, emphasize the disruption experienced in North Africa and the Middle East since the Arab Spring and reflect the artist's continual interest in providing a nuanced depiction of Nubian culture and history. The works are beautifully constructed pieces that are meant to stimulate thought about migration, memory, and representation.'

Maurita Poole will teach a Williams course entitled, Contemporary Art of the African Diaspora. Using original works from Fathi Hassan: Migration of Signs and WCMA's collection students will consider areas of convergence and divergence in the practices of artists from the Atlantic and Islamic worlds.

About the Artist
Fathi Hassan was born was born in Cairo in 1957 to Sudanese and Egyptian parents. He won a grant to study set design at the Naples Art School in Italy. Since graduating in 1984, he has lived in Le Marche, Italy. Over the past 30 years he has participated in numerous solo and group shows in Italy (including the 1988 Venice Biennale), Belgium, Denmark, Egypt, and New York. Recent solo exhibitions include Fathi Hassan, Leighton House Museum (2010); Nigger, Palazzo del Duca, Senigallia (2010); Tasaheel, Centro d'Arte L'idioma, Ascoli Piceno (2010); Kenuz, Domus Artis, Naples (2009); the Dakar Biennial (2008); a solo show at the Museo Nazionale Villa Pisani, Venice (2008); the group shows Arabicity at the Bluecoat Arts Centre, Liverpool, and Beirut Exhibition Center, Lebanon (2010); Text Messages at the October Gallery, London (2006); and an installation at The Smithsonian National Museum of African Art, Washington DC (2002). His work is in the permanent collection of the Victoria & Albert Museum and the British Museum, London and The Smithsonian National Museum of African Art, Washington DC.