Forbidden rooms sees the artist tackling the concepts of censorship, guilt and longing. The works on display comment on our societal responses to transgressions of common norms, whether political, religious or ideological. 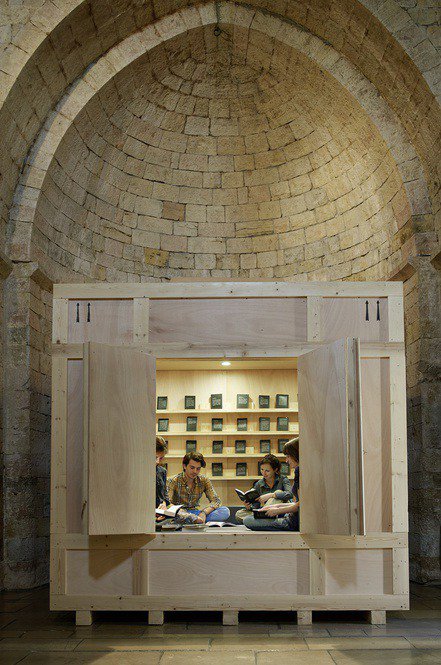 Annet Gelink Gallery proudly presents Forbidden rooms, Alicia Framis (Spain, 1967). Known for her often performative and participatory works that play on the notion of disrupting and enlarging the absurdities of mundane and everyday injustices, Framis' work can be placed in that of a long line of female artists who deal specifically with the intersection between the private or subconscious and the public realm.

Forbidden rooms sees Framis tackling the concepts of censorship, guilt and longing. The works on display comment on our societal responses to transgressions of common norms, whether political, religious or ideological, and ask us to consider the 'normality' of such responses.

On display in the main space is the work Confessionarium (2014), a transparent confession booth that allows its entrants to be seen by the outside world. Leaving the machinations of the Catholic church uncloaked, Framis raises the issue of the hypocrissy prevalent in the church. The work also emphasises the need for transparency in a society that is repeatedly critiziced for its secrecy and unwillingness to take responsibility for its faults and mistakes.

Also on view in the main space, the work Forbidden Book Room (2014) takes on the aesthetics of a shipping crate to form a closed room with over a hundred books that have been forbidden at particular moments in time or in particular countries. Visitors are encouraged to take some time to read these forbidden works in the quiet and private confines of the room. By displaying such seemingly innocuous titles as Beatrix Potter's The tale of Peter The Rabbit next to more outrightly challenging books like Karl Marx's The Communist Manifesto, Framis underpins the problematic nature of the act of censoring. By encouraging the visitors acts of quiet 'disobedience', Framis brings to light the flexibility and resourcefulness of the mind's ability to go beyond what is accepted and allowed, whilst showing the often absurd results of its actions in the inverse direction.

Continuing on from this theme, Framis' Departures (2014) drawings present departure boards with fanciful flights to literary and fictional destinations, including Valhalla and Gotham City. Evoking the tense, nervous and escapist energy of an airport departure hall, the flights are seen as either boarding, on time, cancelled or delayed. Through the drawings Framis lays bare how everyday practicalities both fuel and inhibit our longing to loose ourselves in alternate worlds.

With Forbidden rooms Framis forces us to contemplate different realities, by breaking open the spaces we keep concealed through (self-) censorship and the demands of day-to-day life. Moreover, Forbidden rooms sees Framis evolving as an artists, offering more of herself in the works and concepts on display than she has previously done.

She represented the Netherlands in the Dutch Pavillon at 50th Venice Biennial (2003).