The exhibition in the framework of the Next Level Conference presents characteristic examples for the development of flight simulators beginning in the 1980s. 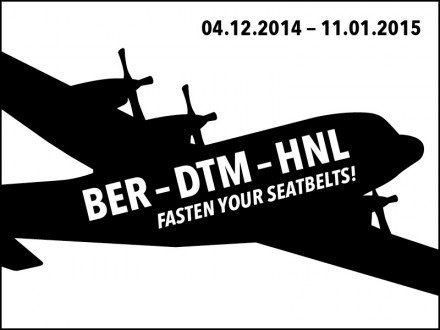 HMKVʼs exhibition in the framework of the Next Level Conference presents characteristic examples for the development of flight simulators beginning in the 1980s. This selection will be augmented by a variety of different artistic positions that address the ideas of simulation, play, and flight. The flight simulations presented here frame - as 'serious games' - a point of departure for an investigation into contemporary works of art that explore the “dream (and realities) of flying” in political, philosophical, or aesthetic ways.

The exhibition title suggests a travel route from Berlin‘s uncompleted airport (BER) via Dortmund (DTM) to Honolulu (HNL). HNL derives from the video game Microsoft FSX. The original version of this flight simulator was enhanced with add-ons that allow players to fly over Hawaii. For this purpose, Dillingham Airport, which is a mere landing strip in the standard version, was expanded into a full-fledged airfield with extremely realistic scenery. The scenic flight starting from here is suited for beginners; it takes less than ten minutes and can be flown in the exhibition by two people playing together or against each other.

All the games can be played in the exhibition.