In "ADinfinitum" Wang Qings ong's colossal and daring photo-murals encompass the entire 3rd floor of the museum. "Geometric Abstraction Since 1950": MACBA's collection of multinational artists is transported to the galleries on the second level. The 11 th annual Breakfast in the Park showcases FIU's monumental Sculpture Park on December 7 with the artist Daniel Arsham. 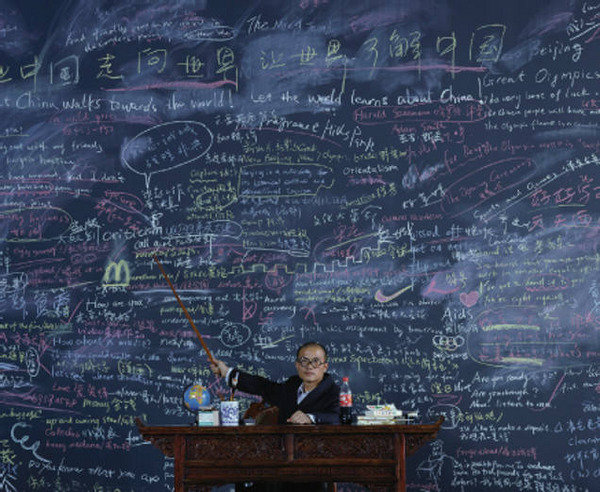 The Patricia and Phillip Frost Art Museum ushers in Art Basel season 2014 with two powerful shows opening November 8 . From China, Wang Qingsong ’s ADinfinitum , and from Argentina Global Exchange : Geometric Abstraction Since 1950 (from the collection of the Museum of Contemporary Art in Buenos Aires , MACBA ). Both exhibitions open Saturday, November 8 with a reception 5 -­‐ 8pm . Wang Qingsong will present a lecture at 4pm.

This strong pairing sets the season into motion with a blaze of elaborate color and spectacle: Wang Qings ong’s colossal and daring photo -­‐ murals encompass the entire third floor of the museum . MACBA’ s stellar collection of multinational artists is transported to the Frost’s three galleries on the second level . During Art Basel week , the 11 th annual Breakfast in the Park showcases FIU’s monumental Sculpture Park on Sunday, December 7 with Am erican contemporary artist Daniel Arsham as this year’s guest speaker.

Recognized worldwide as one of China’s most in novative artists, Wang Qingsong is based in Beijing and was born in 1966 at the start of the Cultural Revolution. The artist has been invited to Miami for the opening reception and will speak at 4:00 p.m. on Saturday, November 8.

ADinfinitum fea tures giant photographic masterpieces the artist stages in huge spaces such as movie studios and warehouses . These works depict the drastic ch anges occurring in China, and the challenges brought about by this accelerated transition. They chronicle th e dif ficulties that such rapid societal change has presented to the Chinese people. The artwork can require months of logistical preparation and staging , and recruitment of dozens and sometimes hundreds of models for epic photo -­‐ shoot s ( many are done in one day and with no digital manipulation).

The exhibition is site -­‐ specific, feat uring 12 of Wang’s large -­‐ scale works (some from the Miami collections of Ella Cisneros, Anthony Japour and Craig Robins). Spanning all three galleries of the Frost ’s th ird floor (a rarity for the museum ), the show encompasses 2,500 square feet. A first for Wang’s solo shows, each gallery is dedicated to a particular theme of his work . The artist’s deep nostalgia for Chinese tradition permeates one gallery dedicated to this core subject matter . One of the artworks in this exhibition, Crazy Reader s , has never been shown in the United States . “Known for wandering the streets of China armed with a camera, Wang states that he uses his photo -­‐ murals to witness and emulate the hopes and frustrations of the Chinese people,” said Curator Lidu Yi, professor and art historian at Florida International University. “ ADinfinitum brings the story of China past and present to a new Western audience fascinated by his country’s cultural and artistic dramas.”

P art of the Frost’s longstanding collaborative partnership with the Museum of Contemporary Art in Buenos Aires (MACBA), t his exhibition features 30 works spanning 1950 -­‐ 2014 . T he commanding roster of artists showcases MACBA’s emphasi s on crosscurrents of inf luence in geometric abstraction between artists worldwide . The scope of A Global Exchange sets it apart as one of the only group shows to present the interchange among geometric artists on such a global scale and comprehensive timeline.

“ As of Mid -­‐ C entury, artists from disparate countries experienced newly gained freedom to travel, meet and learn from each other ,” adds Houston . “ Rapid dissemination and absorption of new ideas about modern painting were transmitted and spread internationally. Not just about the formal and technical concerns, but also about the progressive ideals revolving around the movement, the promises of new technologies , and its new egalitarian and optimistic perspectives after World War II, planting the seeds for future generations of artists . There’s a selfless quality about geometric art that creates a dialog ue beyond individual artists ’ private emotions. As Richard Anuszkiewicz famously proclaimed in the 1960s : ‘ What you see is what you get.’”

This updated Miami version of MACBA’s original thrust to explore geometric abstraction adds new focus on modern -­‐ day artists spearheading new variations of Colo r Theory and Op art, plus new acquisitions and historical works not shown before from artists suc h as Henryk Stazewski . The show traces the trajectories of the movement’s ideals all the way up to the new millennium, with Cristina Ghetti’s 2014 Vibrancy and Joy (zig painting).

There ar e classic examples of 1960s Op a rt . T he 50 th anniversa ry of the Op movement is in 2015, it debuted with MOMA’s seminal 1965 show “The Responsive Eye , ” making this exhibition at the Frost a well -­‐ timed kick -­‐ off to this anniversary . H alf of the artists in this show participated in the g roundbreaking MOMA exhibi t . Rarely seen examples of perceptual art, alongside a broad sweep ranging all geometric art perspectives through six decades , are also showcased.

T he exhibition invites visitors to ask how geometric abstraction developed over time and distance , how this form has conveyed larger philosophical and political ideals, and how geometric artists changed the traditional relationship between artist and viewer. “ A G lobal E xchange is more than just the idea behind the name of this exhibition,” said Aldo R ubino, MACBA’s executive director. “It is the philosophy and spirit at the heart of MACBA’s mission. Geometric a rt has become our sole focus at MACBA because it is an art form present in every element of life. Its relation to other sciences like mathe matic s and physics allows for more open and embracing qualities . It is inclusive -­‐ never exclusive."

Each year, in celebration of Art Basel Miami Beach and to showcase the Frost’s renowned outdoor Sculpture Park, the museum hosts Breakfast in the Park and invites a noted sculptor to speak. The event draws hundreds of art enthusiasts, patrons, collectors, gallery owners and artists from around the world (many of whom are visiting Miami for Art Basel). Guests enjoy a complimentary outdoor breakfast, plus informal lectures and guided tours of the Sculpture Park and the exhibitions in side the museum.