The works in this exhibition explore the space of fantasy as an ongoing process of transmutative imaginings. In this space, the viewer is carried on a journey to other fantastical worlds of endless becoming. This process enables a liberation from static, finite ideals and generates possibilities for new connections to emerge, allowing the viewer to make links with their own imaginary repertoires. 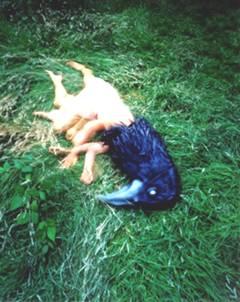 The works in this exhibition explore the space of fantasy as an ongoing process of transmutative imaginings. In this space, the viewer is carried on a journey to other fantastical worlds of endless becoming. This process enables a liberation from static, finite ideals and generates possibilities for new connections to emerge, allowing the viewer to make links with their own imaginary repertoires. These transformative processes of fantasy are evidenced within the actual materiality of the works themselves as forms and figures merge and transmute in delightful, playful constellations that move us beyond our specific self-identities. The affects and intensities of these works act as mediators that allow the spectator to engage in an endless process of transmogrification. This process, where one thing becomes another in an ongoing mutation of identity, is simultaneously disturbing, enlivening, joyous and dark.

Eline McGeorge's computer-animated drawings take a single still drawing on paper or on the computer as a starting-point to produce a sequence of layered drawings that mutate on-screen in the style of free-association - engendering imaginary narratives and worlds in the process.

In Pearl C. Hsiung's video-work, everyday activities such as walking and eating set off a chain of metonymic substitutions that move from the ordinary into a transformative space of dynamic possibility. In this process, the image moves into a virtual dimension that is funny, physical and jives to a pounding beat.

The female protagonists in Lisa Fielding-Smith's videos perform versions of female fantasy and desire, using minimal props and costumes to create theatrical situations that engender a sense of anticipation and suspense for the viewer. In the performance of these simulations of identity, a sense of risk is posed.

In Annie Whiles' embroidered insignia fabricated from felt, satin and canvas and pasted onto the wall, a series of heraldic portraits revolve around the central image of a crow. Each portrait's coiffure, stitched and made from real hair, is shown in a process of transmutation that furls beyond the frame of each face, thereby imparting narrative flow into the stasis of the heraldic shield.

Julia Warr's paintings imbue the abstraction of the grid with the iconography of the female image. The grid-like structures fragment the female icons into parts that can be assembled in infinite variations.

In Glauce Cerveira's painting a dense colour field made from tiny beads manifests a mysterious mask-like figure that floats across the surface. The ground of the image is differentiated from the mask by the use of subtle hues that shimmer and shift in tone as the viewer moves in front of the work.

Lynne Marsh's recent video work consists of imaginary happenings. By introducing performative elements into real and fictional spaces, she juxtaposes the social, the environmental and the personal in a playful examination of female identity. The video for the exhibition will present a woman hanging upside down from the ceiling of a ballroom, spinning in a shimmering sequined costume, reflecting the pattern of light around the space. For this exhibition, the artist was supported by Arts Council England and University of Hertfordshire.

In Sarah Woodfineâ€™s drawings, cut-out elements can only be completely read when viewed at a specific angle. Figure and landscape merge and appear as the eye moves around the artwork.