From Chardin to Cindy Sherman, 200 major works focus on the image and status of the Artist in society. Paintings, sculptures, drawings, installationsâ€š covering over two centuries, from Watteau and Chardin to Boltanski and Cindy Sehrman, via Tiepolo, Goya, Daumier, Courbet, Seurat, Ensor, Rouault, Leger, Klee, Chagall, Picasso, ... The circuit includes nine audiovisual stations showing extracts from old films (Les Enfants du paradis by Marcel Carne, Freaks by Ted Browning...) and videos by contemporary artists. In the same spirit as Jean Starobinski's 1970 book, 'Portrait of the Artist as a Clown', this exhibition deals with the way artists, after a certain period, portrayed themselves through the clown figure, a phenomenon which reflects their changing social status 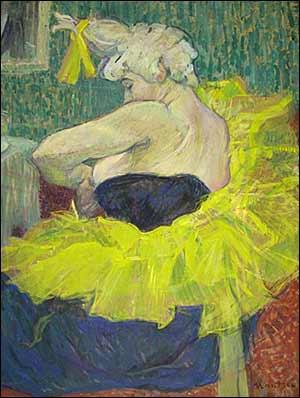 Portrait of the Artist as a Clown

From the outset, it should be clear that this exhibition does not focus on the circus in the arts or even directly on the history of the circus. In the same spirit as Jean Starobinski's 1970 book, Portrait of the Artist as a Clown (Skira, ''Les Sentiers de la crÃ©ation'' collection, republished by Gallimard in 2004), it deals with the way artists, after a certain period, portrayed themselves through the clown figure, a phenomenon which reflects their changing social status.

Around 1780, the image that artists had of themselves and that society beamed back at them began slowly but inexorably to change. They ceased to be regarded, and to regard themselves, as the equals of the Greats of this world and began to see themselves as marginal beings; outcasts and consequently, metaphorically, as buffoons or clowns, and this was the image they projected. Hence an upsurge in their interest for the circus a popular form of entertainment that was developing at the time. Concurrently, the solemn, ceremonial self-portraits of the classical age were superseded by ''ironic'' self-portraits in which artists gave their features a caricatured, grimacing twist.

The exhibition is thus divided into nine sections:

Il Mondo novo, the new world, is that of fairground shows in northern Italy at the end of the 18th century. The showmen travelled from town to town operating their optic boxes and crowds flocked to peer at their weird sights and watch the clowns.

About the same time, the interest that artists took in physiognomy (Lavater), the expressions and postures which would soon be described by psychiatry and neurology (Charcot), gave fresh impetus to portraiture.
2. Parade

''Every parade is a parody. Every parade is a lost paradise. A parade, which dramatises but tries to stop â€š the meaning of the Spanish word parar â€šthe decay of the society it portrays is a self-portrait, in a derisive, noisy mode, of a world it thinks it is celebrating but which has already disappeared.''
3. Ecce Homo

From the clown disfigured from childhood, of whom Victor Hugo painted an unforgettable portrait in The Man who Laughs, to Professor Rath dressed up as a pathetic stooge in Josef von Sternberg's film The Blue Angel, the figure of the tragic clown has haunted many works since the 19th century. The artist who identifies with him becomes a modern Christ, a ''descendant'' of the mocked figure that Pontius Pilate exhibited to the crowd.
4. '' Portrait of the Artist''

Although artists have been known to portray themselves in a derisive or grotesque way since ancient times, it was not until the 18th century that this self deprecating mode began to develop. It triumphed with Romanticism: henceforward artists saw themselves as marginal beings, outcasts, sonderlinge, social misfits, vagabonds, showmen.
5. ''End Game''

The marginalisation of the artist's status aroused a feeling of dereliction. Misunderstood by the public, sometimes ''damned'', the artist became a wandering figure, kept on the fringes of society, like the circus which puts up its big top in the suburbs and wastelands. This section groups images of circus people, on their own, with their families or in groups.
6. Turbulence and Chaos

Fairs and circuses began to attract artists â€š painters, poets, writers and musicians â€š who saw in them a source of dreams and fresh inspiration, subjects which would break with academic conventions and aesthetics.
7. Monsters and Marvels

As it is a closed, circular world, peopled with strange, extraordinary creatures, the circus is an excellent example of the scala naturae, the great scale of beings stretching from the bestial depths of curiosity cabinets to the heavens above. Animals are part of this evolutionary parade of living creatures with the power to amaze and terrify.
8. Heavenly Bodies

This section focuses on the acrobats, jugglers, trapeze artists, tightrope walkers and dancers, monkey and lion tamers, under the invocation of Nietzsche's fable: ''Man is a rope stretched between the animal and the Superman- a rope over an abyss. ...'' (Thus Spake Zarathustra)
9. Harlequin

Harlequin was originally a diabolical character, the ferryman between the kingdom of the dead and the world of the living. It was not until the Middle Ages that he became cheery fellow, and later incarnated one of the main figures in the commedia dell'arte.

The exhibition ends with the movements of Jonathan Borofsky's clown automaton.

Chairman of the Steering Committee
Pierre ThÃ©berge, Director of the National Gallery of Canada, Ottawa