For the exhibition 'Off The Rack' Nairy Baghramian presents sculptures and installations includes photographic pieces. Laure Prouvost presents her installation video Swallow with whom she has won the Turner Prize in 2013. She deploys the art historical theme of the bathers as an expression of the human relationship. 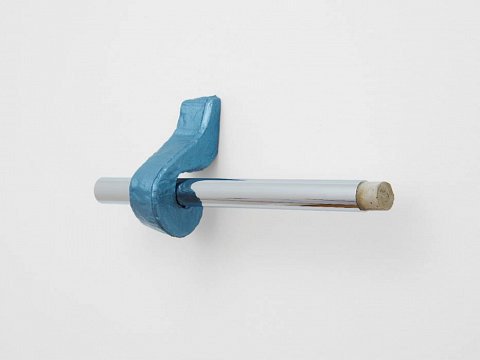 Nairy Baghramian
Off The Rack

The exhibition Off The Rack at Neuer Berliner Kunstverein is the first solo presentation in a Berlin institution by the artist Nairy Baghramian (b. 1971 in Isfahan / Iran, living and working in Berlin since 1984). Apart from sculptures and installations her work includes photographic pieces, by means of which also space and conditions of an exhibition are investigated. Classical museum elements, such as pedestals and showcases, are questioned here, and modes of representation, such as the invitation card, become a conceptual part of the exhibition. With a subtle and formally precise approach to space and form, Nairy Baghramian examines the institutional context and reassesses existing rules and structures. At the same time she reflects the status of the artwork within the social context, as well as the role of the artists and curators. With a special focus on materiality she often makes her objects and sculptures appear unstable, her sculptures with their reduced geometric forms revealing references to Minimal Art and her organic fragmentary structures quoting the modernist repertoire of forms from architecture and design.

In the exhibition at Neuer Berliner Kunstverein, Nairy Baghramian presents the work Von der Stange (Handlauf) / Off The Rack (Handrail) (2014), an extension of an edition, which, in 2012, she developed for Gesellschaft für Moderne Kunst at Museum Ludwig Cologne. With an art piece that encompasses one of the two exhibition spaces – a chromed brass tube assembled from single sections, held by painted, pick-like cast aluminum elements – Baghramian addresses the phenomenon of the edition. Editions consist of a number of objects produced by artists specifically for sale in an institution – in particular in art societies. Starting from her own work, she questions the concepts of originality and work of editions and investigates their character as a work of art. Also on show is the piece Beliebte Stellen (Privileged Points) (2011), originally developed for the Stedelijk Museum. Painted metal rods, bent into an open round, are marking places that refer to specific hanging traditions in the institutional exhibition space and thus analyze the practice of presenting works of art. Baghramian here plays with the diverse temporary and changing meanings that are assigned to specific locations and functions.

Publication
The exhibition is accompanied by a publication in the series „n.b.k. Ausstellungen“, published by Verlag der Buchhandlung Walther König, Cologne.

The exhibition at Neuer Berliner Kunstverein is the first solo presentation in a German institution by artist Laure Prouvost (b. 1978 in Lille, France, living in London). Gathered from her experiences as a Frenchwoman living in London, the Turner Prize winner 2013 examines in videos and installations forms of miscommunication - phonetic variations, slips of the tongue, translation errors – unlocking their potential by juxtaposing image and text. In the video piece Swallow (2013), structured by the recurring motif of a wide-open, sharply inhaling mouth, pictures of female nude bathers, palm leaves, a female nipple next to an open fig and crushed raspberries are alternating against the background of a pond. Prouvost uses rhythmic sequences in different tempos, varying sharpness and blurring, text images and a dominant soundtrack, in order to create a form of Arcadia in Swallow. She deploys the art historical theme of the bathers as an expression of the human relationship to one’s own naturalness and translates it into a contemporary, visually stunning and sensual collage. Apart from Swallow, the exhibition at Neuer Berliner Kunstverein shows the video Burrow Me (2009).