"The Thing and the Thing-In-Itself" presents works that act out the limits of human understanding, and leave viewers with provocative questions; by: Marcel Duchamp, Joseph Kosuth, Rene Magritte, Piero Manzoni... Michael Wang exhibits the series Rivals, the works bisect the space, creating a material horizon. 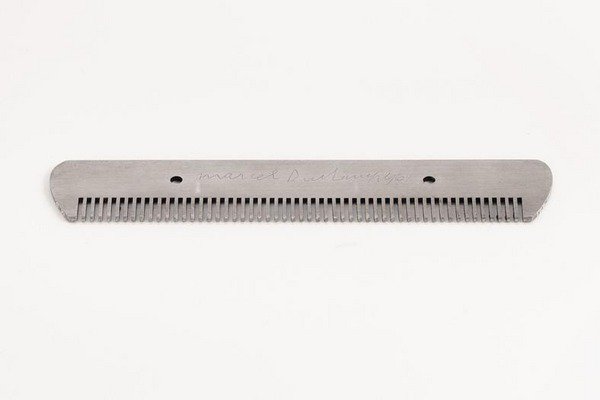 curated by Robert Hobbs
The Thing and the Thing-In-Itself

Andrea Rosen Gallery is delighted to announce The Thing and the Thing-in-Itself, an exhibition comprising a tightly focused group of 20th-century masterworks curated by noted art historian Robert Hobbs. Bringing together a compelling group of significant works, one by each of seven key 20th-century artists – Marcel Duchamp, Joseph Kosuth, René Magritte, Piero Manzoni, Yoko Ono, Ad Reinhardt, and Robert Smithson – this exhibition offers viewers the opportunity to look at familiar artists in a new way and with much greater depth, both in relationship to each other and in regards to their individual practices.

Curator Statement
The Thing and the Thing-in-Itself focuses on the limits of human understanding that Immanuel Kant contemplated in The Critique of Pure Reason (1st ed. 1781). This philosopher speculated that humans only know things in the world through space and time, as well as the causes they attribute to these objects and events. Instead of accurately replicating the world, people’s understanding of it is dependent on their restricted ability to grasp it. In other words, they construct the world they experience, making sensory information idiosyncratic and/or socially oriented rather than accurate, and people’s perception of their world an ongoing film or performance. It helps to consider Kant’s term “thing-in-itself” as shorthand for the strict limits to the ongoing theater of everyday life humans produce, direct, and cast, so that they themselves can then serve as its main players.

This exhibition utilizes Kant’s approach to reconsider how certain twentieth-century artists engaged the frontiers of human understanding in works that pit people’s sight and insight against the limits of what they are able to comprehend, i.e. the things they believe themselves to be seeing as opposed to “things-in-themselves” (Kant’s code word for humans’ inability to move beyond their own constructed views). Instead of presenting an art endeavoring to reveal its contents to viewers with the least amount of interference, The Thing and the Thing-in-Itself features works that act out the limits of human understanding as they create mysteries, pose conundrums, and leave viewers with provocative questions.

Starting in the second decade of the 20th-century with Duchamp’s Readymades, art’s status as an object became a subject of inquiry, with questions about differences between ordinary things and art. The Thing and the Thing-in-Itself consequently begins with Duchamp’s assisted readymade, Comb (Peigne), a steel grooming tool for dogs, inscribed with the words “3 ou 4 gouttes de hauteur n’ont rien a faire avec la sauvagerie; M.D. Feb. 17 1916 11 a.m.” (“Three or Four Drops of Height [or Haughtiness] Have Noting to Do with Savagery.”). The exhibition then surveys the following six notable steps in the history of the art/thing challenge. René Magritte’s La Clairvoyance of 1936 depicts a self-portrait of the artist in the process of metamorphosing his model, an egg, into a bird in flight on his canvas, thereby setting in place a tongue-in-cheek differential between representational painting and life. The early majestic black Reinhardt canvas from 1954 challenges the limits of sensory perception, with its grid poised on the divide between visibility and invisibility. Manzoni’s Merda d’artista (Artist’s Shit) (1961), a tin of artist’s feces, ironically undermines the artist’s traditional role as creator, the value placed on art’s materiality, and the traditional view of it as a container of enlightening contents. Kosuth’s Glass Words Material Described (1965) consists of exactly these four words painted on four transparent sheets of glass to undermine art’s putative transparency and accessibility. Ono’s 1966 live video feed of the sky above the gallery contrasts literalism with traditional expectations of transcendence. And Smithson’s Non-site: Line of Wreckage (Bayonne, New Jersey) of 1968 undermines the art object’s sovereignty as it creates an interplay between the metal bin containing landfill with a map and photographs of the site in Bayonne, making this work a dislocated boundary marker.

Andrea Rosen Gallery is pleased to present Michael Wang’s exhibition Rivals at Gallery 2 in cooperation with Foxy Production. Upon entering the gallery, viewers will find five certificates, acting as a kind of performance documentation for the works in the exhibition all from the artist’s series Rivals. Taking the form of white, metal shelves containing well-known consumer goods from multinational corporations, the works bisect the space, creating a material horizon.

Each shelf, made from powder-coated aluminum, houses objects appropriated from the product portfolios of rival firms. The sale of the artwork funds an equal investment in each rival firm as the artist is paid for the work in common stock to become a one millionth of one percent owner of both companies, thereby rendering him a fractional owner of what the artist considers a conceptual merger. The number of products included from each corporation corresponds to the number of shares that will be purchased with the sale of the artwork.

While Duchamp’s readymades of the early 20th century took the industrially-produced object out of circulation, by the end of the cen­­­tury the readymade as “commodity sculpture” had fully entered another system of circulation: the art market. Rivals joins these two systems of exchange, linking the value of the readymade to the valuation of the multinational corporations that produce and profit from such objects. For Wang, the readymade includes not only the object of mass consumption, but those systems of which it is a part: brand ownership, exchange value, and corporate finance.

Rivals acts within these expanded parameters of the readymade. The works appropriate corporate value (of a piece with the global financial system) as an artistic medium. The works manipulate the underlying structures of capitalist growth. Competition is the engine of capitalism and asymmetry drives competition between rival firms. Through a neutered gesture, Rivals introduces a formal symmetry into the structure of competition. An investment in rival corporations sets in motion the apparatus of corporate finance, but the balance of the act—an equal investment in both corporations—cancels out its competitive effects.

The works in Rivals take the movement of capital itself as a site of artistic intervention. The collector, artist, and gallery collaborate to enact a performance of exchange, orchestrated around and by the work. The repercussions of the action extend into the networks of capital within which the work is enmeshed. If one of the uses or responsibilities of an artwork is its ability to apprehend the present while simultaneously existing within it, Wang’s work can be seen to motivate an evaluation of the most powerful systems structuring cultural production.