Impromptu. The exhibition features 3 large-scale landscapes and a series of gunpowder paintings inspired by Argentinian animal life, tango, and Southern European religious paintings; as well as a ceramic installation using locally made terracotta. Will take place an ephemeral "explosion event". 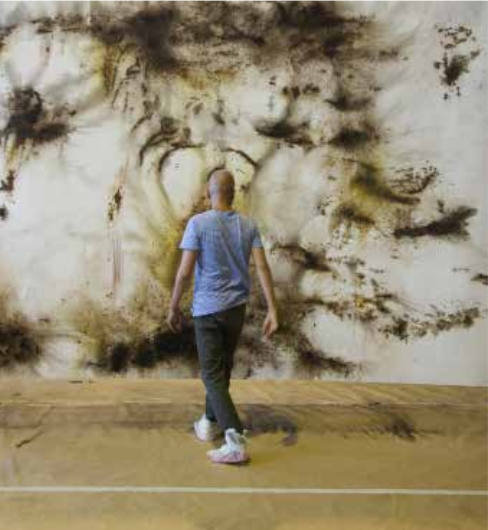 Fundación Proa is pleased to present Impromptu, the first solo exhibition of contemporary artist Cai Guo-Qiang in Argentina. Born in Quanzhou, China in 1957, Cai moved to Japan in 1986 and has lived in New York since 1995. He is considered one of the most significant artists active today; his versatile and creative approach to materials is as impressive as the magnitude and scale of his works. Cai Guo-Qiang's first visit to Argentina is the result of an invitation from Proa to hold a solo exhibition along with an ephemeral "explosion event" that will take place on the river adjacent to the foundation's premises.

The artist's chosen title for the exhibition—Impromptu—reflects an approach akin to the musical and choreographic creativity he witnessed in tango and other manifestations of Argentinian culture. The exhibition features three large-scale landscapes inspired by his visit to Northern Argentina (Misiones and Salta) rendered in gunpowder; a series of gunpowder paintings inspired by Argentinian animal life, tango, and Southern European religious paintings; as well as a ceramic installation using locally made terracotta that is suspended between Proa's café and bookstore.

One of the galleries presents a video installation featuring Cai's signature "explosion events," providing an overview that reflects his approach that aims to establish an exchange between viewers and the larger universe around them. The exhibition is complemented by a new video produced in Argentina documenting the process of making the exhibition at Proa, and the preparations for his upcoming "explosion event" in January.

Several components of the exhibition were produced in public view with the assistance of students from Universidad Nacional de las Artes (UNA) and from the Instituto Municipal de Cerámica de Avellaneda. This open artistic approach engages chance and the participation of local volunteers as a key component of the final result. In a way, the process itself becomes an intercultural dialogue and an "event" directed by a master of ceremonies, one with an Impromptu nature due to the unpredictability of the elements at play.

In conjunction with the exhibition, the artist will present an ephemeral "explosion event" titled Life is a milonga: Tango Fireworks for Argentina on Saturday, January 24, 2015. His artistic proposal integrates fireworks, music, dance, and audience participation, in a journey that traces the development of tango and the history of the country over the course of the 20th century.

The exhibition is a production of Fundación Proa; it is funded in full by Tenaris – Organización Techint.
Accenture is the exhibition's technology partner and the Grupo Clarín its partner for press and outreach.