Centre de recherche: 15th part of its cycle A Moveable Feast. Koether produced a painting installation that relates to the history of her work in the space and its different incarnations. 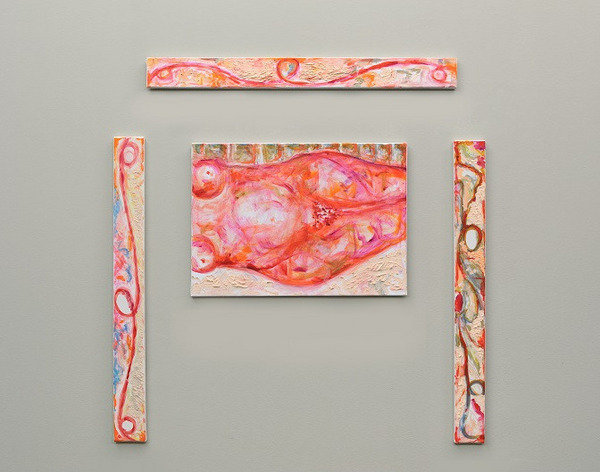 Campoli Presti is pleased to announce the 15th part of its cycle A Moveable Feast with the presentation of a new work by Jutta Koether, entitled Centre de recherche.

Thinking of the cycle A Moveable Feast as an occasion to share the current state of the gallery artists' practice, Koether produced a painting installation that relates to the history of her work in the space, its different incarnations, as well as it indicates the potential development of an idea. The installation is considered as an offering, a particular moment in time of the work, in between something done and something to come.

The work can be understood within the frame of an ongoing investigation on a style that she explored during the ´80s, revisiting the whole notion of painting as an actual body. The nude that is portrayed in the painting is an excerpt of a late work by Lucian Freud. In Koether's work the impasto is placed outside of the body instead of being used in function of the body. The female torso assumes the highly artificial shape of a balloon and works in contrast to the flesh and its materiality, which has taken an external position. It is an exploration of another type of painting that engages in a raw interaction between an opaque and a thin material.

This procedure is guided by Koether's recent interrogation of the role of the plastically crafted medallion in Botticelli's Portrait of a Man with a Medal of Cosimo di Medici (c. 1474) and how much this alien material presence questions the symbolic value of painting. Just as Boticelli shows off an image of the most powerful man at the time, Freud exposes the authority of the thick painted bodies that have become one of the most valuable artistic commodities, contrasting the interior experience of the studio and the hyperexposure of its value in a particular materiality.

Koether's plank paintings, first used for the performance series ‘Grand Openings: ‘Return of the Blogs’ at MoMA in 2011, are potential structures whose position is continuously negotiated. The planks took the shape of a garland holding the space in her 2011 exhibition Mad Garland at the gallery. For A Moveable Feast, the garlands are adjusted and moved around for the occasion to work as a support system, a framing device that protects the painting from falling apart. Evoking the idea of an arcade into Koether's next body of work, the garland becomes a portal, an announcement of future lines of research to arrive.


Jutta Koether lives and works in New York and Berlin. Her work forms part of the permanent collections of MoMA, New York; the Musée d'art moderne de la ville de Paris; Museum of Contemporary Art (MOCA) in Los Angeles; Nationalgalerie in Berlin and Kunsthalle Bern. Her work will be included in the Shanghai Biennial this November. Koether has had solo exhibitions at DCA – Dundee Contemporary Arts (2013) and Arnolfini, Bristol, Moderna Museet in Stockholm (2011), Bergen Kunsthall in Norway (2008), Kunsthalle Bern in Switzerland (2007) and Koelnischer Kunstverein in Cologne (2006). She was included in the Whitney Biennial in 2012 and 2006 and in the 2012 Sao Paulo Biennial. Jutta Koether is currently a professor at the Hochschule für Bildende Künste in Hamburg.