The Future is now!

The exhibition presents Over forty video works and media installations tell the story of the Korean New Media Art scene, from the early works by Nam June Paik, to the experiments carried out in the 1980s, by way of the digital revolution and the cultural changes triggered by the Internet and the social networks. 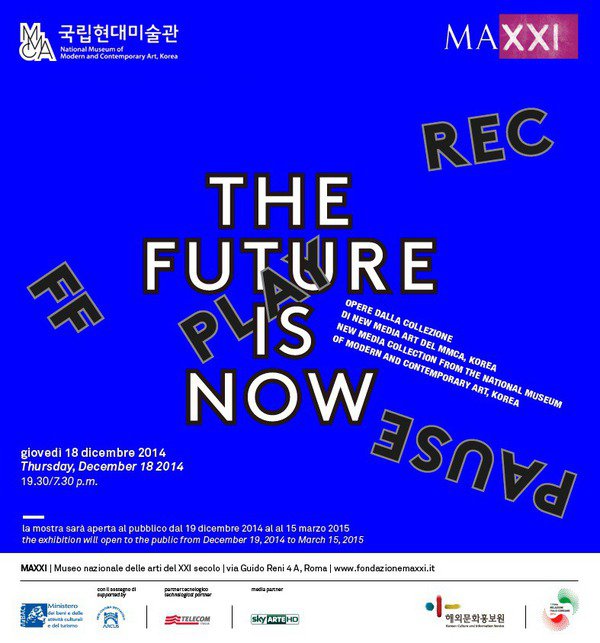 Over forty video works and media installations tell the story of the Korean New Media Art scene, from the early works by Nam June Paik, to the experiments carried out in the 1980s, by way of the digital revolution and the cultural changes triggered by the Internet and the social networks. THE FUTURE IS NOW! is organized by MMCA National Museum of Modern and Contemporary Art, Korea and jointly produced with MAXXI. The works of 41 works by 33 artists from Korea are on view from December 19, 2014 to March 15, 2015.

THE FUTURE IS NOW! presents MMCA’s New Media Art collection with the aim of reflecting on the “futures” by analyzing New Media Art ever since it was founded in 1987 to the present day. The exhibition does not just include works from the museum collections, but also a vast range of audiovisual materials.

It may seem paradoxical, but if you dream of the future, you need to focus completely on the present, because the future all depends on today’s choices, decisions and actions. This is the meaning of the title of the exhibition taken from the famous words the artist Nam June Paik used to describe his idea of the future.
We know that the first works of New Media Art produced at a time when there was little understanding of this new form of expression are the foundation for the works produced today, a fact that shows once more to what extent today’s actions lay the foundations for our future.

The exhibition hosted in the Sala Gian Ferrari and the Sala Carlo Scarpa is organized in four chronological sections:
1/ Pioneers of New Media Art in Korea,
2/ Combining Art and Technology: Age of Challenges and Experiments,
3/ Emergence of the Internet and Expansion of New Media Art and
4/ Culture Creatives in Digital Age.

The title of the exhibition is derived from PAIK Namjune’s definition of future. PAIK Namjune is an artist whose life seems to proceed along with his work. As an artist who lived the present moment in the truest sense, Paik’s definition is full of significance. It is a paradox that when we dream about the future, we must focus entirely on the present, since the choices and actions of the present moment determine our future.
The National Museum of Modern and Contemporary Art, Korea (MMCA) presents The Future is Now!, featuring its collection of new media artworks. The aim is to reflect on the “futures” that the museum has envisaged for new media art since its foundation in 1987 in Gwacheon. The museum has passionately promoted PAIK Namjune’s art in Korea, stimulating interest in new media art by organizing exhibitions that introduced international artistic trends to the Korean public.
The museum has also regularly presented experimental new media art in New Visions New Voices, a series of exhibitions that focus on the work of younger artists. The museum has acquired a total of 123 new media artworks to date. After merging with Art Bank in 2012, the museum has increased its efforts in the research and the acquisition of new media art. In November 2012, the museum received a valuable donation of archival materials on PARK Hyunki, a leading figure in the early days of new media art in Korea, and the museum is now working on the organization and the study of this material.

This exhibition covers the early works of new media art created in the 1960s, a time in which there was little understanding of this new art form. These works are the foundation of today’s new media art. Our actions today build our future. If we want a bright future, we must live, feel, think of, and act in the present moment to the fullest.
THE FUTURE IS NOW!

PIONEERS OF NEW MEDIA ART IN KOREA
The first section of the exhibition presents some of the most important works from the museum’s New Media collection, including works by Korean pioneers of the genre, such as KWAK Duckjun, PARK Hyunki and PAIK Namjune. These works, arranged chronologically illustrate the development of new media art in Korea. Video art was initially introduced to Korea in the mid-1960s with PAIK Namjune’s pioneering works (Magnet TV, Zen for TV, and Highway Hacker). At the time, although he immediately gained recognition abroad, PAIK Namjune’s works had only been exhibited sporadically in Korea. This section includes works by PAIK Namjune and other Korean artists that were working abroad, including Self-Portrait 78 and Event 8230 by KWAK Duckjun, MMCA’s Artist of the Year 2003. It also features early works by artists based in Korea who were seeking to develop their unique artistic vision, such as PARK Hyunki’s Untitled (1979) and Untitled (1991).

COMBINING ART AND TECHNOLOGY: AGE OF CHALLENGES AND EXPERIMENTS
In the 1980s, after PAIK Namjune’s three satellite projects in 1984, 1986, and 1988, and The more, the better (Dadaikseon) at MMCA in 1988, video technology and video art began to appear on a larger scale in Korea. Other MMCA events that prominently featured video art include the exhibition for the celebration of the 1993 Daejeon Expo and the Whitney Biennale. All of these events inspired Korean artists to actively embrace new media as an artistic discipline, culminating in the 1992 New Visions New Voices exhibition, in which a group of artists born in the 1960s unveiled new works, resulting from their intensive experimentation in combining art and technology. Those artists, including KONG Sunghun, YOOK Taejin and KIM Haemin, were part of the “video generation”: a generation of artists that grew up with TV and Hollywood movies, developing a new sensitivity to video.

EMERGENCE OF THE INTERNET AND EXPANSION OF NEW MEDIA ART
With the advent of the new millennium, the digital revolution provided much more access to the internet, transforming the processes of contemporary art. By enabling the limitless reproduction of objects, the digital revolution lead to the emergence of new concepts related to the production and reproduction of artworks. The vastly expanded connective reach through cyberspace accelerated globalisation and the traversing of existing physical boundaries. Artists born in the 1970s who started their careers in the late 1990s created works that reflected the new status of art in a society where in which internet, video, and other new media became deeply integrated in our everyday life. Video art, which once existed only in association with performance or installation art, has now evolved into an independent art form reflecting artists’ unique perspectives on society, and as such, has become an essential pillar of visual culture. These artistic achievements can be seen in video works by KIM Sejin, IM Heungsoon, HAM Yangah and other artists.

CULTURE CREATIVES IN DIGITAL AGE
The supply of digital services and the spread of social networks have shaped a series of cultural and social changes in Korean society. Attempts to surpass neo-liberalism are being made through participatory and cooperative practices and the creation of local communities. When it comes to creating art, experiments with different fields, like design and engineering, have gradually increased, not only on an individual basis, but collectively. News from Nowhere is an artistic endeavour by the two artists MOON Kyungwon and JEON Joonho that forms an exclusive creative world with the cooperation of experts in various fields, such as an architect, a dancer, and a designer. BANG & LEE undertake a historical and artistic consideration on both the dangers and the possibilities of new media. The project created by Everyware presents a technology that can create a warm environment through the combination of analogue sensitivity and digital technology. The use of sound and performance beyond art is now an accepted and collaborative process. Rather than focusing on new media art as a new expressive media, experimentation has been conducted to understand and accept the possibilities, meanings and limits of new media in a wide cultural context.