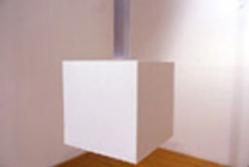 Flying Cube, a white cube floating in the center of the exhibition space, challenges gravity and activates the traditional gallery space. The floating cube responds to unique visitor interaction: although the audience plays the role of an active observer, the viewer's relationship to the physical space is called into question. Through design of furniture, leisure/work facilities and wall/space constructions, Hein interrupts and redefines the environment.

Jeppe Hein articulates a lively and often unexpected dialogue between his work, the viewer and the site of intervention. While his sculptures refer to Minimalism and question the authoritarian nature of the museum or gallery exhibition space, his method necessitates that the audience physically trigger the work. His work is thus at odds with the phenomenological interpretations of Minimalism, in which the viewer interacts only abstractly with the work. Hein delights in apparently serendipitous events, suspends common sense laws of cause and effect and conjures scenarios in which, responding to the viewer's presence, seemingly sentient behaviour is coaxed from inanimate objects.

This exhibition is curated by P.S.1 Curator Jimena Blazquez

The P.S.1 presentation of Roth Time comprises five of the artist's largest and most complex works exploring the subjects of time, decay, and the diary. In 1970 Roth began work on Gartenskulptur (Garden sculpture), a project that would continue even beyond his death. Continuously augmented and developed over a period of almost thirty years, Gartenskulptur is a meditation on collection, decay, and metamorphosis. The installation's first manifestation was a bust Roth formed from birdseed and chocolate that was placed on an outdoor platform for birds to pick apart. Over time Roth added to the sculpture, placing various small art pieces and pre-installation sketches and drawings of the work itself on and around the platform. Every incarnation of the piece incorporates materials found on site, and the waste that results from Gartenskulptur's exposure to the elements is recycled back into the work through a system of tunnels and preserving jars, allowing the work to grow with every installation. Installed with the assistance of BjÃ¶rn Roth, the artist's son and collaborator, Gartenskulptur shares its exhibition space with the workshop where its progress is monitored and developed.

In the same gallery is Fussboden (Floor, 1975â€“92), a wooden studio floor covered with pigment and glue. To create this piece, Roth literally removed the floor from his studio in Iceland and installed it directly in front of a gallery wall, as one would place a painting. This textured, ruptured canvas functions as a record of Roth's actions from 1975 to 1992 and asserts that a studio floor is just as much a work of art as the works produced upon its surface.

In 1973 Roth began a long-term project known as Flacher Abfall (Flat waste), for which he collected food packaging and other found scraps, subsequently encasing them in over 600 binders and filing them in bookshelves. This piece addresses Roth's artistic role as collector, cataloguer, and archivist. Preserving the refuse that he and others had left behind, Roth created both an autobiographical record and an environment in which the viewer is forced to confront the ephemeral nature of existence through exposure to the collection of garbage.

Reykjavik, Iceland, was an important place in the artist's professional and private life. Reykjavik Slides (1973â€“75 and 1990â€“93) comprises 30,000 photographic slides purporting to document every single building in the Icelandic capital. Solo Szenen (Solo scenes, 1997â€“98), also shot primarily in Reykjavik, is an installation composed of 131 video monitors and players stacked in a grid of three wooden shelves, each presenting continuous footage of the artist going about his daily routine. Solo Szenen, the culmination of a series of written, film, and video diaries that Roth began in the early 1980s, is his attempt at illustrating life as the accumulation of vast quantities of fragments of data.

Lin's floor slides from the wall and ceiling, creating an alternate way to experience the space. As in classical Chinese painting, the perspective of the cafÃ© is suspended, and the viewer can no longer determine where the floor ends and the wall begins. Transforming a communal space, creating an illusion of depth, and erasing spatial borders, Lin alters our perception of volume by producing an effect of infinitude. The quotidian becomes spectacle.

In a continuous investigation of ornamentation and its relationship to architecture, Lin creates architectural interventions using patterns from traditional textiles and decorative arts. Utilizing, among others, armchairs, beds, floors, walls and cushions to support his surfaces, which are decorated with a profusion of brightly colored patterns, Lin blurs all borders between surface and structure, function and ornamentation, architecture and interior design.

This exhibition is curated by P.S.1 Curator Jimena Blazquez.

P.S.1 Contemporary Art Center presents a large-scale project by Hedi Slimane. He was invited by P.S.1 Chief Curator Klaus Biesenbach to be in the artist residency program at Kunst-Werke Studio Program in Berlin from 2000-2002. At the heart of the project are photographs Slimane took of his environment, people, and various places he visited while living in Berlin.
These photographs were first made into a book, published by Karl Lagerfeld in his ''EDITION 7L,'' a series of books published with Steidl publications. This is the second book in Slimane's career. The first, ''Intermission,'' was published in 2002 by the Palazzo Pitti in Florence and the Palais de Tokyo in Paris.

For KW in Berlin, Slimane developed Berlin, an installation composed of hundreds of digitized photographs projected onto a large cube in the gallery space. For P.S.1 Berlin is installed in the Kunsthalle space on the second floor. The cube, which measures 11 feet tall by 15 feet wide, divides the space into four distinct viewing quadrants allowing the visitor to discretely experience each wall of projections.

Of his time in Berlin, Slimane notes, ''Berlin is an open space for me â€“ I don't feel like I need to make any effort when I am here. I take the overnight train from Paris, and I arrive really early in the morning, when the city is only slightly awake and silent. The train going from west to east creates a sort of urban intimacy [...]

P.S.1 Contemporary Art Center presents a cycle of new drawings based on an ongoing story New York-based artist Ernesto Caivano (b. 1972, Madrid, Spain) has been developing titled After the Woods.

In the narrative, the woods symbolize an alternative reality informed by folklore, fairytales and contemporary technology. The epic tale is centered on the reunion of a young man and woman after a separation of 1,000 years. During their time apart, the man becomes a knight and the woman transforms herself into a spaceship. While her metamorphosis represents the advancement of intelligence culminating in technological development, his transformation triggers the evolution and expansion of the natural landscape. All of the creatures, and the forest itself, grow and change with the pair, all learning how to reconcile their individual abilities to alter the environment. Each of his skillfully rendered drawings informs the others and all are subsumed by a coherent, total experience that is motivated by the imaginative narrative Caivano has constructed.

For P.S.1, Caivano debuts a ''selection'' of new drawings from the chapters of After the Woods: Love of Philapores; Traps, Screens and Offerings; and Last Escape. The drawings depict various scenes of the knight, the princess, the landscape and struggling birds named ''philapores'' on whose feathers information and code is transferred between the separated couple. Thus, in order to reunify with his lost wife, the knight is obsessed with acquiring these magical feathers. The birds, incapable of conventional flight but able to traverse through dense matter; struggle to release the feathers from the bags and to decipher the code they carry. The philapores are ultimately after the same end as the characters and the inhabitants of the woods: the control and dispersion of information and the way it affects the land.

The brief but extraordinary and intense career of Lee Lozano has been a subject of rediscovery in the art world over the past few years. Drawn from Life, the first major exhibition of Lozano's work since her death in 1999, focuses on her drawings and notebook pages, with a selection of related paintings, to reveal the complexity and depth of an artist whose body of work remains elusive.
With over 150 works, many never before exhibited, or very rarely seen, the show will present a portrait of Lozano through explicitly humorous drawings from the early 60s; tool paintings and drawings which led to volumetric and perforated canvases in the mid-60s; studies for the Wave Series, a group of eleven paintings made between 1967 and 1970 which engage Minimalism, Op/perceptual art, and installation; and her last works which are among the most important, heady conceptual investigations of the late 60s/early 70s. By 1971, Lozano had purposely abandoned her career, rejecting the art world with Dropout Piece. More than thirty years later, her life and work is a source of continuing fascination.

Please join us in celebrating the opening of all our new exhibitions and the P.S.1 International Studio Program Open House on Sunday, March 14, from noon until 6:00 p.m.

P.S.1 Contemporary Art Center
is located at 22-25 Jackson Ave at the intersection of 46th Ave in Long Island City, 11101 NY
Open from Noon to 6:00 p.m. Thursday through Monday. The museum is closed on Tuesdays and Wednesdays.