4A Centre for Contemporary Asian Art

In 2015 4A Centre for Contemporary Asian Art (4A) embarks on MASS GROUP INCIDENT, a five-month program of exhibitions, artists commissions, site-specific projects, performances, film screenings and public programs. MASS GROUP INCIDENT explores social engagement and collective action through the ever-shifting and complex position of the individual in relation to the group. 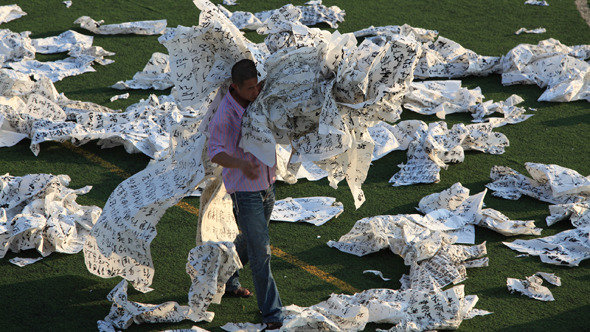 MASS GROUP INCIDENT is a major five-month project curated and produced by 4A Centre for Contemporary Asian Art. Between 17 January – 31 May 2015, a multi-stage program of exhibitions, site-specific projects, performances, film screenings and public programs will be presented at 4A’s galleries in Sydney’s Chinatown district and a number of off-site locations.

Bringing together artists from Australia, Asia and Europe, MASS GROUP INCIDENT explores ideas of social engagement and collective action through the ever-shifting and complex position of the individual in relation to the group. From the fervour of the dissenting drive in the struggle for a different world, through to the sober realities of expediency and complicity, contemporary ideas and expressions of collective action resonate across history and geographies in ways that have profound implications for our present and our futures.

In its spectrum of artist-driven ‘incidents’, MASS GROUP INCIDENT takes a measure of the masses within the works and practices of a varied group of artists tracing several arcs of activity and points of contact between individual and collective forces in Asia alongside the Australian context.

MASS GROUP INCIDENT is a deliberately provocative title that leaves itself open to a multiplicity of social actions – as well as inactions, interactions, transactions, counteractions, distractions, contractions and abstractions. As contemporary art practice increasingly takes interdisciplinary and ephemeral forms as a means of navigating individual experience that mirror or set themselves against very real social frictions, the relationships between artists and their audiences are no longer incidental to the actual, physical work of art. Within and without the contemporary art object, the cumulative broader societal effect of ‘mass group incidents’ in our region has a profound role to play in the decisions individuals and groups make, avoid or oppose in the daily act of living.

Actions for Tomorrow is the first solo exhibition in Australia of Yangjiang Group, the Chinese artist collective that use the medium of calligraphy as a conceptual springboard into a diverse range of installations and performances. Hailing from Yangjiang, a coastal city in Guangdong province, Yangjiang Group comprises of three key members – Zheng Guogu, Chen Zaiyan and Sun Qinglin – as well as a number of collaborators from their hometown.

In Actions for Tomorrow, Yangjiang Group will continue their investigation into the impact of social change on people and communities by addressing the relationship between calligraphy as high culture and it’s everyday use; from personal catchcries to marketing slogan; hand-scrawled gambling receipts to the written rules for sports and games. The exhibition focuses on two distinct bodies of work which will include wax-encased sculpture, kinetic elements, and a specially commissioned large-scale calligraphic mural spanning 10 metres of the gallery walls.

Yangjiang Group: Actions for Tomorrow is the first exhibition component of MASS GROUP INCIDENT.
4A and Yangjiang Group will host a Twilight Garden Party at the Chinese Garden of Friendship, Darling Harbour, to celebrate Chinese New Year.