The Duesseldorf Photo Weekend 2015 is a weekend of international exhibitions and events at which many Dusseldorf museums, cultural institutions and galleries participate with photographic exhibitions. 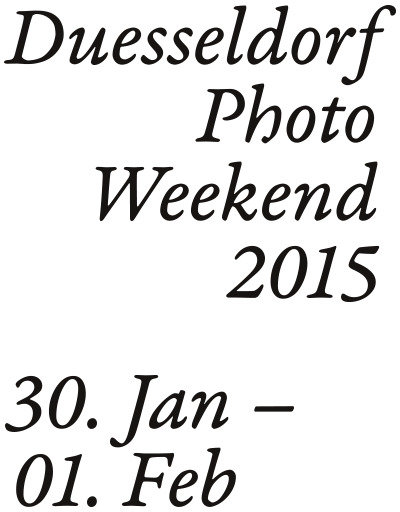 The Art of Photography: more than 40 exhibitions open on one weekend

With the Duesseldorf Photo Weekend 2015 the state capital underlines its reputation as an international metropolis for photography.

Opening with two parallel exhibitions at the NRW-Forum Launching the event will be the opening at the NRW-Forum on Thursday January 29 at 7pm of the two exhibitions “Human Nature” from the Art Collection of the Deutsche Börse AG, and “NeoRealismo The New Image in Italy 1932 - 1960” shows artistic positions that deal with the relationship between man and nature in a variety of landscapes. Themes include nature, far from civilization, and the changes induced by society. The exhibition “NeoRealismo The New Image in Italy 1932 - 1960” analyses the relationship between photography and other genres of the arts such as cinema and literature. The photography goes beyond the myth of ‘Bella Italia” and impressively shows a realistic, sparse and often hard Italy, which, nonetheless, appears to radiate vitality and beauty.

Adding to the eclectic mix of the Duesseldorf Photo Weekend 2015 are, amongst others, the artists’ portraits of the German photographer Maren Heyne whose work as part of the AFORK (Archive of Artistic Photography of the Rhineland’s Arts Scene) collection is being shown at Museum Kunstpalast. In a second exhibition the museum is showing works by the artist Vera Lutter who lives in New York and prefers to work with the camera obscura. The Julia Stoschek Collection is contributing with the present exhibition “Number Nine: Elizabeth Price”. The British artist and 2012 Turner prize winner is well known for her work with the digital moving image.

The Galleries: Vintage Prints of Mick Jagger
The galleries form an important part of the arts scene in Düsseldorf and so, they are strongly represented during the Duesseldorf Photo Weekend 2015. For example, the young gallerist Philine Cremer presents the Chinese artist Maleonn (Ma Liang) who, influenced by film and theatre, creates lyrical scenes of the imagination. The Gallery Beck and Eggeling is showing “Not a House” with photographs by Joachim Brohm, whose work, according to Artforum’s J. Hoffmann & C. V. Miller “demonstrate that there are other kinds of straight photography in Germany besides the ‘Becher School’.” The gallery Burkhard Eikelmann invites visitors to varied exhibition encompassing vintage prints of Mick Jagger; work from the young Düsseldorf Art Akademie student Arjan Stockhausen; the fashion photographer Dylan Don, as well as work by Rudy Burckhardts and Peter Grubor. New talents are especially supported and presented by the galleries, such as the artist Anna Vogel, masters graduate of Andreas Gursky, who is with her new work entitled “Strategies for Satellites” by Gallery Conrads.

Portfolio Review: Support for Young Artists
The exhibition programme is complemented by a series of events such as the Portfolio Review that takes place at the NRW-Forum on Saturday January 31 from midday until 7pm. The aim of the project is to provide a forum where national and international, young, talented photographers can present their work to an international jury and so create a platform where vibrant dialogue amongst ambitious artists, publishers, gallery owners, curators and established photographers is supported.