Tears of a Tree, three monumental collage paintings fill each of the gallery floors of the museum. The exhibition also includes a grouping of new sculptures titled The Loop of Deep Waters. 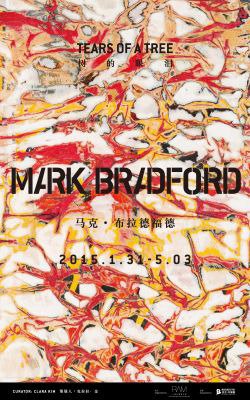 The Rockbund Art Museum is pleased to present the first major museum exhibition in Asia of the celebrated Los Angeles-based artist Mark Bradford. Commissioned specifically for this presentation, three monumental collage paintings will fill each of the gallery floors of the museum. These exuberant new works titled The Tears of a Tree, Falling Horses and Lazy Mountain are inspired by the artist’s visits to Shanghai and what he found to be the dynamic melding of disparate cultures, economies and functions in the city—the sprawl, heavy industry, old port city, the French Quarter, and the glamour of the nouveau riche.

Coming across old colonial era maps of Shanghai at a local market, the artist became interested the partitioning of the city during the international zone period; the changes to the Chinese address system under the imposed Japanese system; as well as the pre-industrialization landscape of the city—in other words, the mapping and remapping of the city, and the molding and remolding of the physical landscape over many decades. The paintings are informed by this context, and the massive change in the urban landscape that he witnessed in the two visits he made over the last five years.

Each of the 12-meter long paintings, created by the nuanced layering and removal of paper, will be installed in RAM’s galleries which will be stripped down in its architecture, exposing the windows of the building normally covered up to create an enclosed white cube. This simple gesture, conceived by the artist as part of the installation, will not only bring daylight into the space but will create a physical and symbolic connect into the city, bridging Bradford’s art with RAM’s early 20th century building and the waterfront of the Bund—the historic center of the former British and American concession.

Additionally, the exhibition will also include a grouping of new sculptures titled The Loop of Deep Waters. Suspended on the fifth floor gallery, the buoy-shaped forms made up of his signature materials—paper, caulking agents and cords are characterized by rugged surfaces that seem to contain the layers of time while floating in space. Together, the works evoke an otherworldly universe, where perspectival shifts and forces of gravity operate by an alternate set of rules to imagine a poetic, almost magical landscape of abstraction.

A four-color catalogue will be published in conjunction with the exhibition. The publication will provide curatorial context for the newly commissioned work. The catalogue will include a foreword by RAM director Larys Frogier; an essay by exhibition curator Clara Kim; and an essay by Doryun Chong, chief curator of M+, Hong Kong. The publication will be bilingual—in English and Mandarin, and distributed internationally.