Tony Oursler presents a series of 7 imposing photographic visages looms over the spectator in the main gallery, all but one punctured by video screens of eyes or mouths. 'Cross Section of a Revolution' is a group exhibition that explores global aspects of trade, trauma, religious belief systems and contested territories, via a number of intersecting political practices, across photographic, sculptural, painterly and filmic media. 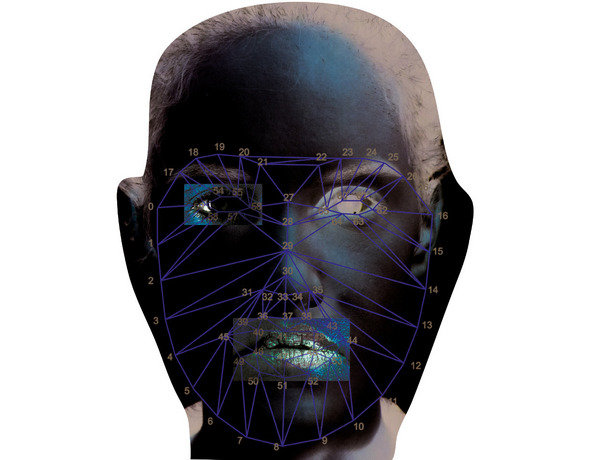 This solo exhibition of Tony Oursler – the artist’s first of new work in the UK for over five years – centres around his fascination with the evolution of identity via techniques of facial recognition technology. Oursler explores the nuanced ramifications of these tools increasing ubiquity in daily life. The artist’s interest in the face as the locus of communication and identity, through features, movement and expression, is central to these works. A series of seven imposing photographic visages looms over the spectator in the main gallery, all but one punctured by video screens of eyes or mouths. One of part of this installation is an endlessly shifting projection of 150 algorithmically produced Eigen faces, revealing the beautiful yet distinctly non-human qualities of biometric analysis. One of the artist’s intentions is to “invite the viewer to glimpse themselves from another perspective, that of the machines we have recently created”. Each of these giant portrait heads bears the network of marks or nodes associated with different facial recognition systems, used by border controls, law enforcement agencies and even ATM machines. The images, staggered maze-like throughout the space in the manner of theatrical props, present themselves as potential police mug shots, closed-circuit camera stills or anonymous faces in the crowd, albeit magnified in scale and distorted by their mediation through surveillance technology.

This main installation reflects an ongoing body of multimedia works by Oursler related to mimetic technology and its effect on contemporary psychology. Another new parallel series situates these reconfigured faces squarely in the undefined context of the 21st century. Nine wall-hung, stainless steel panels contain traces of now further abstracted facial features, with the latticeworks used to recognise people here transposed into etched silhouettes constituting the altered identities we are increasingly forced to assume by the strictures of modern life.

The pursuit of biometric data in facial scans, iris patterns and fingerprints all add to our burgeoning and invisible electronic profiles, amounting to a sinister accumulation of personal information on databases that capture and categorise humans according to outward appearance, unique bodily traits and even DNA sequencing. Oursler himself has studied and written about various methods of facial recognition, ways to circumvent such means of detection, as well as the phenomena of physiognomy, anthropometry and pareidolia (the mistaken appearance of faces in nature or everyday objects): “The illusory face triggers part of the brain that is used in pattern recognition – long thought to be important to the evolution of the species. Without it we would not learn from the stimuli around us. So keen is our ability to find patterns that it is more important to the species to make false positives than not.” Tony Oursler, On Chance and Face, from Vox Vernacular, 2013.

An accompanying display of drawings and a film programme also explore our struggle for individuality in the digital age, and includes the screening of a 1947 movie, Boomerang, written by Oursler’s grandfather, which was based on the true story of a wrongly convicted murder case, involving a mistaken identity.

Cross Section of a Revolution

Beginning at the crossroads between Central and Eastern Asia, Liu Xiaodong’s Hotan Project (2012-13) depicts Muslim locals of the Xinjiang province digging for rare jade deposits in the notorious opencast mines and devastated landscapes of one of China’s most remote and politically tense regions. Painting from life over a period of two months spent with the jade miners, Liu’s “dirtily realistic” (according to curator Hou Hanru) monumental canvas, East, one of a quartet, captures the disenfranchised Uygur people eking out their living through transactions of precious stones with the ruling Han Chinese. Further along the Silk Road, across the border into Pakistan, is where Rashid Rana’s Red Carpet (2008) originates, although his transliteration of a traditional, mystical and ritualistic Persian rug is disconcertingly woven out of a digital micro-mosaic of gory images of bloodied goats, culled at abattoirs in Lahore.

Sacred and profane meet to devastating effect in Adam Broomberg and Oliver Chanarin’s installation, Divine Violence (2013), an entire set of 57 framed works containing their modified King James Bible – its holy texts interspersed and overlaid with photographs from the Archive of Modern Conflict, a container for historic and contemporary images of war, human suffering and anonymous terror. After discovering Bertolt Brecht’s own, heavily annotated bible, Broomberg & Chanarin underlined salient passages in each chapter, somehow colluding with their collaged finds to relay the messages of God as those of some terrible, omnipotent governor.

Further catastrophe and retribution is meted out in Allora and Calzadilla’s 20-minute film, The Bell, the Digger, and the Tropical Pharmacy (2013), which shows the demolition of an industrial building by a digger, armed with a cast-iron bell rather than a wrecking ball. The spectacular demise of the controversial GlaxoSmithKline drugs plant in Cidra, Puerto Rico – which was closed after a contamination incident highlighted by a whistle-blower – is both seen and heard as the church bell smashes through interior walls, leaving a resonant score in the wake of its destructive force.
The titular work, Cross Section of a Revolution (2011) is Haroon Mirza’s cultural remixing of two very distinct Islamic populations. The first, on the East coast of Africa in Kenya, is depicted by a number of men drumming during a Muslim wedding ceremony, the percussive backdrop over three monitors being both ritualistic and looped to create a complex rhythm. Another video displays footage of a student in a speech competition in Lahore, delivering a speech in Urdu – his tone recognisable as that of a persuasive, political speech. Each of these artists reveal how the cross-pollination of global cultures can result in a rewiring of faith, hope and morality.