New works by the Italian artist: a quiet ode to the imponderability of experience. Each of his works is set on the ground, without a pedestal to separate them from the floor. 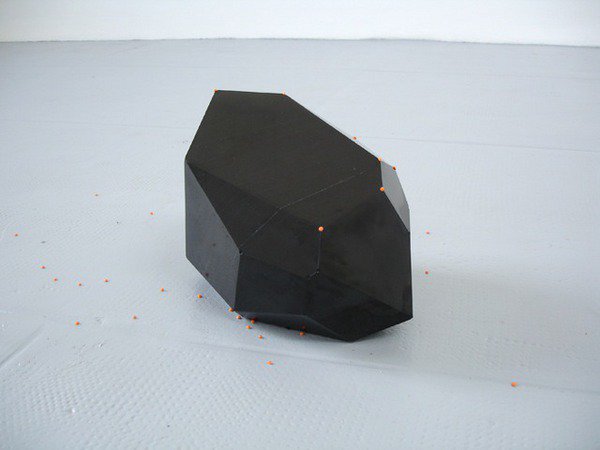 Bernard Bouche Gallery is pleased to announce a forthcoming exhibition of new works by Italian artist Gianni Caravaggio, from 7 February to 21 March 2015. A free artist reception will take place on Saturday, February 7 from 4 to 8 p.m. in the Gallery.

By reading through the exhibition catalogue, released in October 2014 by The Museum of Modern Art in Saint-Etienne, we realise that what emerges in Caravaggio’s works is not an investigation into the limits of perception, but rather, a quiet ode to the imponderability of experience and the irreducibility of the individual impression. Gianni Caravaggio always manages to set up a silent dialogue with the viewer, supported by creation of an emotional and intellectual tension that leads to meditation, to inner silence, to concentration and to constant reflection on the meaning of our existence.

Each of his works of art is set on the ground, without a pedestal to separate them from the floor. The artist uses humble materials like flour along with marble and bronze. In Caravaggio’s works the dimension of the floor becomes a true horizon of the events, a shore of possibility. Using the intangibility of shadows as an actual sculptural material, Caravaggio creates a precariously poised object whose visual unity is always on the verge of disappearing.

As reflected in Jean-Luc-Nancy’s latest essay on Gianni Caravaggio “An art such as sculpture establishes a mutual creation of places and materials. A stone stands out, it becomes distinct. It appears like a rock fragment. But it is not valued as a piece: it is valued as a rough weight, a thick compact mineral [...] This totality poses and imposes: it is the place, it doesn’t occupy it but it makes it, it accomplishes it. It gives it movement for a start, its fall in situ and its ability to press the ground damaging, scraping or tearing it. What happens here with this stone is an image.”

Born in 1968, he teaches sculpture at Brera Accademy, Milan. In 2002 he received the Special Fund Prize from PS1 in the context of the Italian Studio Program and in 2005 was awarded the Castello di Rivoli Prize in Turin and the Alinovi-Daolio Prize in Bologna. In 2011 he won the Sculpture Prize, organised by Francesco Messina Foundation. He has had solo exhibitions of his work at the Castle of Rivoli in 2006 and at The Maramotti Collection (Scenario) in 2008. His latest works are displayed at The Museum of Modern Art of Saint-Etienne and at The MAGA Museum Gallarate, Italy.