'Silence' . The exhibition will be the first full representation of Kawara's output, beginning in 1964 and including every category of work, much of it produced during his travels across the globe. 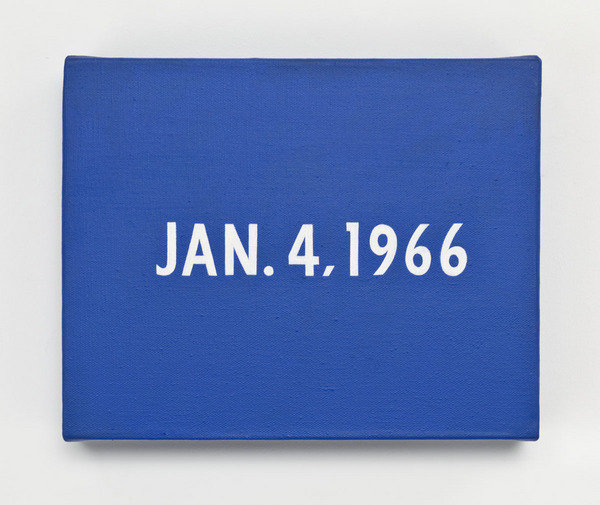 Through radically restricted means, On Kawara’s work engages the personal and historical consciousness of place and time. Kawara’s practice is often associated with the rise of Conceptual art, yet in its complex wit and philosophical reach, it stands well apart.

Organized with the cooperation of the artist, On Kawara—Silence will be the first full representation of Kawara’s output, beginning in 1964 and including every category of work, much of it produced during his travels across the globe: date paintings (the Today series); postcards (the I Got Up series); telegrams (the I Am Still Alive series); maps (the I Went series); lists of names (the I Met series); newspaper cuttings (the I Read series); the inventory of paintings (Journals); and calendars (One Hundred Years and One Million Years). The exhibition will also present numerous drawings produced in Paris in 1964, which are fascinating proposals for unrealized works; and Kawara’s only two extant paintings of 1965, Location and Title, which herald the Today series. In conjunction with the exhibition, the Guggenheim will organize a continuous live reading of the artist’s One Million Years, the steady recitation of numbers from a vast ledger, which will be performed on the ground floor of the Guggenheim rotunda.

On Kawara’s paintings were first shown at the Guggenheim Museum in the 1971 Guggenheim International Exhibition. Over 40 years later this large exhibition will transform the Frank Lloyd Wright rotunda—itself a form that signifies movement through time and space—into a site within which audiences can reflect on an artistic practice of cumulative power and depth.

The Leadership Committee for On Kawara—Silence is gratefully acknowledged for its support, with special thanks to David Zwirner, New York/London; Glenstone; Leonard and Louise Riggio; and Konrad Fischer Galerie, Düsseldorf and Berlin.

This exhibition is also supported by the National Endowment for the Arts.