Wael Shawky presents his epic video trilogy that recounts the history of The Crusades from an Arab perspective and she highlights both the secular motivations of the European fighters and the competition and violence among Arab leaders. Anne Imhof presents a two day performance followed by an exhibition. 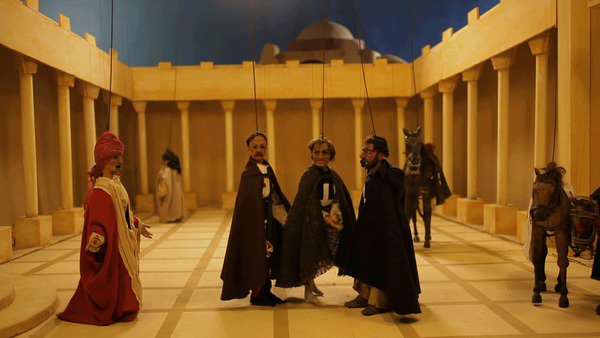 Based on accounts from primary sources, Shawky complicates the traditional civilization clash narrative by describing scenes that refute common notions of the era. Shawky highlights both the secular motivations of the European fighters and the competition and violence among Arab leaders. Using 200-year-old marionettes from a collection in Italy for the first installment, and custom-made ceramic figures for the second, Shawky says the puppets help create a “surreal and mythical atmosphere that blends drama and cynicism, telling a story of remote events that could hardly be more topical today. The puppets’ strings clearly refer to the idea of control. The work also implies a criticism of the way history has been written and manipulated.”

Anne Imhof’s (German, b. 1978) inaugural U.S. solo project consists of a two day performance followed by an exhibition. DEAL, specifically conceived for MoMA PS1, revolves around the structures of illegal street transactions that are underpinned by strict rules and codes while functioning beyond words and juridical regulations.

For the performance component of DEAL nine performers enact highly complex and abstract movements, which evoke power relations, secret codes and unspoken rules that underlie daily human interactions. The patterns and tasks are continuously repeated over an entire day and gradually shift as they push towards a point of collapse.

The exhibition, DEAL
, expands upon the same formal questions and artistic ideas through diverse media, including drawing, video, sculpture, painting and a variation of the initial performance, SOTSB for DEAL (2015), which repeats every Sunday during museum hours. Imhof, who is trained as a visual artist, considers the different media as integral to the process for creating images that gradually emerge in time.

Whereas conventional approaches create ontological hierarchies between the live event, its documentation, and the used objects/props, Imhof emphatically rejects such distinctions. To her, each component of a body of work is interrelated and of equal relevance. They contribute to the creation of a visual image that is perpetually in process, highly precarious, and always on the verge of dissolution.

By collapsing the historically established dichotomy between the ephemeral live event and the physical image, the artist contributes to an expanded conception of performance and the art object itself.

Admission:
$10 suggested donation; $5 for students and senior citizens; free for MoMA
members and MoMA admission ticket holders. The MoMA ticket must be presented at
MoMA PS1 within thirty days of date on ticket and is not valid during Warm Up or other
MoMA PS1 events or benefits.