Studio apparatus - a thematic instalment observing the calendrical celebration of its inception: Introduction; towards a linear understanding of notoriety, power, and their interconnectedness; futurobjecs (misspelt); mysterious island*. *see introduction or Barothic shift. 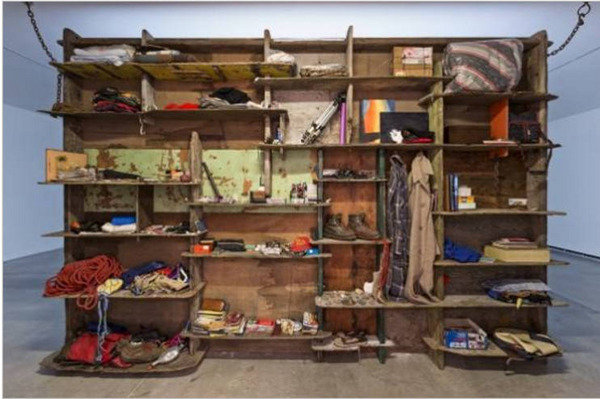 curated by Gail B. Kirkpatrick and Marcus Lütkemeyer.

Studio apparatus for Kunsthalle Münster is part of a serial work-complex whose conditions and sequences of artistic production reflect their places of exhibition. First realized in 1998 in London's Camden Arts Centre, a variation followed at the MAMCO, Geneva in 2005 and in 2010 a reconstruction of the first version again in Camden Arts Centre. In fall 2014, two additional versions were developed for the Palais de Tokyo in Paris and the Kunsthalle Münster—the first time this work will be presented simultaneously in two different locations.

Mike Nelson is known internationally for his large-scale installations and sculptures. The work often demands more than passive viewing, and often must be traversed and physically experienced as spatially pervasive entities. Encroachments, exposures, and annexations using everyday materials transform the spaces they inhabit into mysterious places, ones that are absent of people, within which hidden or unforeseen elements beguilingly or unsettlingly appear, proverbially blocking one's path. Studio apparatus for Kunsthalle Münster invites the viewer on a voyage of discovery to the territories of prospective artistic process—a mental expedition within an archeological mission. Although titled as such, the spaces do not represent the re-creation of a functional artist's studio, instead a momentary snapshot of a work and its creation. The resultant work is somehow lost in the present moment and yet preserved for an archaic future, the rational limits of which question the boundaries of our own orientation both in terms of time and space.

In 2011 Mike Nelson represented Great Britain at the 54th Venice Biennale. He was nominated twice for the prestigious Turner Prize (2001 and 2007) and has been a lecturer at the Rijksakademie in Amsterdam since the early 2000s. Mike Nelson was born in 1967 in Loughborough (GB) and lives in London. Studio apparatus for Kunsthalle Münster is the artist's first solo institutional exhibition in Germany.